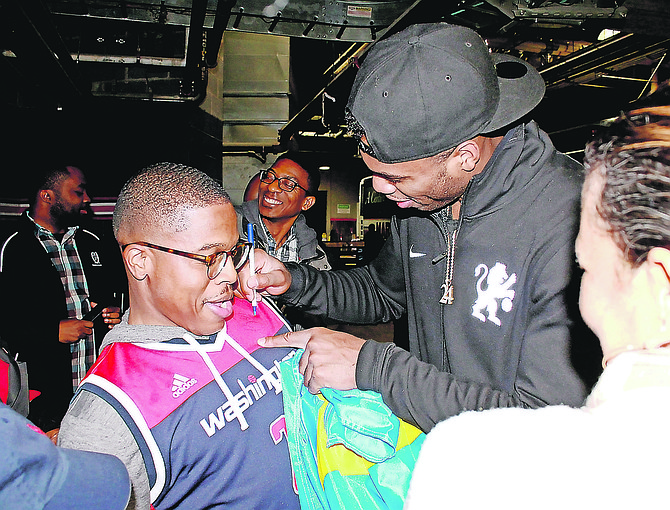 CHAVANO 'Buddy' Hield and the Sacramento Kings slipped to 3-10 to remain in last place in the Pacific Division of the Western Conference after losing a 110-92 decision to the Washington Wizards.

In that game on Monday night at the Capital One Arena in Washington, Hield connected on 12 points in 26 minutes with three rebounds, three assists and three steals before a good crowd of Bahamian-American diaspora.

Hield, 23, is playing in his second season in the NBA after he was drafted as the 6th pick overall in the first round in 2016 by the New Orleans Pelicans. However, he was traded to the Kings on February 20, 2017.

He has also pulled down a total of 60 rebounds, 49 defensively; dished out 25 passes; stripped 16 balls and blocked a shot. In all, he's scored a total of 160 points.

Following Monday's game, Hield took the time out to meet and greet the Bahamian-American diaspora who came to watch the game in Washington. He was able to sign autographs and take photos in the tunnel before boarding the team bus. Hield and the Kings will be back in action tonight when they head to Atlanta to play the Hawks at 7:30pm in the Philips Arena before they return home to host the Portland Trail Blazers at the Golden 1 Center at 10pm on Thursday.