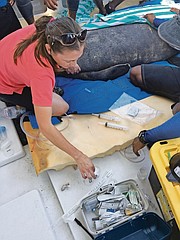 A critically-ill wild manatee rescued from Spanish Wells by Atlantis resort's marine specialists is in stable condition and undergoing treatment.

The Paradise Island resort's Animal Rescue and Care Facility responded to an urgent request from the Bahamas Marine Mammal Research Organization (BMMRO) and the Bahamas Department of Marine Resources on September 23.

Led by Atlantis' Captain Todd Kemp, Director of Marine Mammal Operations, Ryan Dean, and Veterinarian Dr. Kelly O'Sullivan, a team of marine mammal experts from the Dolphin Cay Rescue and Research Centre boarded one of the resort's dedicated marine vessels, the "Sea Keeper," to begin the journey of rescuing the manatee from Spanish Wells.

Despite travelling across heavy seas, the team arrived safely to the island, where they were greeted by local residents who led them to the distressed marine mammal. Showing signs of unusual behaviour, the manatee was stabilized by the team and placed on a foam mattress for the return to Paradise Island.

While on the vessel, the team continued to monitor its vital signs as part of the resort's animal rescue process. At 2:40 p.m., approximately one and a half hours following the intervention, the manatee and team arrived at the resort's Animal Rescue and Care facility where they were met by Dr. Lester Gittens of the Department of Marine Resources, for further analysis of the manatee's condition.

Blood sampling, numerous analyses and a full health examination indicated that the male manatee, approximately eight to ten years of age, was suffering from extreme malnutrition and dehydration. Fluids were administered immediately and the animal was continuously monitored throughout the evening.

Based on the manatee's boat scars, scientists from the Florida Fish and Wildlife Conservation Commission found a photo record match and concluded that prior to its sighting in Spanish Wells, the manatee was last seen in Tampa Bay, Florida.

Scientists and researchers speculate that the recent hurricanes may have caused the manatee to be displaced from its home range and unable to locate food.

Under the care of Atlantis' team of marine mammal experts, the manatee has made a significant recovery.

"After further evaluation by Atlantis Paradise Island's team of marine specialists, I am happy to report that the manatee we rescued is no longer in critical condition," said Michelle Liu, Atlantis' Senior Vice President of Marine and Waterpark Operations.

"Our internal team and marine partners have worked tirelessly to ensure that the marine mammal is provided with the best care possible. The mammal was completely malnourished when he was initially rescued and is now able to eat as many as 50 heads of romaine lettuce, kale and spinach a day.

"The progress has been powerful and we will be ready to move him out of intensive care in just a few days," she added.

Atlantis Paradise Island will continue to monitor the manatee's behaviour patterns and progress until its release back into the ocean.