Lady Wildcats Come Out On Top 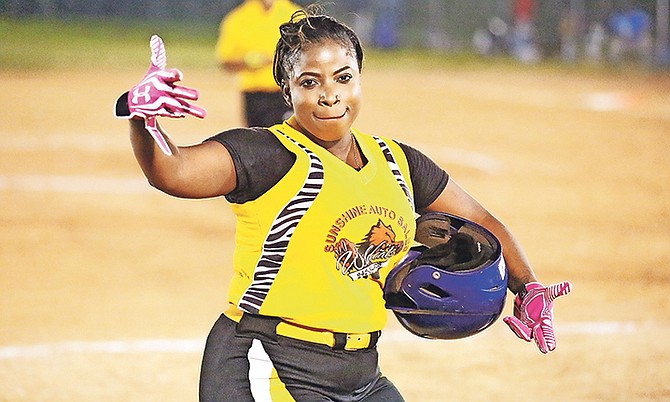 They did it on Sunday night at the Bankers Field at the Baillou Hills Sporting Complex with an impressive 11-3 triumph over the surprising Diamond Dolls from Abaco in an abbreviated five inning affair.

After trailing 3-1 going into the bottom of the first inning, the Lady Wildcats erupted for four runs in the bottom of the frame and six more in the fourth to hold off the Diamond Dolls, who couldn't muster another run the rest of the game.

"It feels good. We haven't had it for three years. We won the pennant two years ago, we won the pennant last year and we finished third this year. We had our struggles, we had our fights, but it didn't affect our winning spirit," said Sunshine Auto's sponsor Deanza 'Sonny' Cox.

Although he joined Cox in the team's celebrations, manager Anthony Bullard admitted the victory haven't sunk in yet.

"We are so excited that we won it," he said. "I told Sonny that we were going to win this for him. He's stuck with us through the good times and the bad times. He deserve it because he's really been there for us when we were up and even when we were down."

Mary 'Cruise' Sweeting, in closing out of her long and illustrious career as she officially retired in style, tossed a four-hitter with two strike outs for the win. Southpaw Cliffenia Smith, in a gallant effort, suffered the loss as she gave up nine hits with two strike outs.

George Knowles, the manager of the Diamond Dolls, said they just simply got beat by a more experienced team..

"We had some injures that shut us down and after we fell behind, the experience of the Wildcats just came through," Knowles said. "But we played to get here to the final and we came out here and they just out played us. But we will be back next year."

The Lady Wildcats, undefeated during the round robin, advanced to the final with a 7-5 win over the Diamond Dolls. In the bronze medal game, the Diamond Dolls came back to pound the Andros' Navigators 13-2 to secure their berth in the final.

With just three teams entered in the ladies' division, the Navigators ended up with the bronze medal.

Here's a summary of the games played:

Mary Edgecombe came in relief for Linda Knowles and with the Wildcats trailing 5-4, she managed to get the job done on the mound to hold off their pesky arch rivals.

Sweeting helped her own cause with a perfect 3-for-3 day with thee RBI and two runs scored to also lead Sunshine Auto's offensive attack. Lashonda Bethel was also perfect at 3-for-3 with three runs scored; Larikah Russell was 1-for-3 with two RBI and a run scored and Rebecca Moss was 1-for-4 with a run scored.

Diamond Dolls 13, Navigators 2: After losing to Nw Providence, the Diamond Dolls made sure that they booked Abaco's ticket to the final as Cliffenie Smith tossed a four hitter, striking out one and led their offensive attack with a perfect 2-for-2 plate appearance with a RBI and run scored.

Tori Knowles was tagged with the loss.

Asharan Roberts went 1-for-1 with a RBI and Vashinelle Hill was 1-for-2 with a run scored for the Navigators as they had to settle for taking the bronze medal home to Andros.

Diamond Dolls 8, Navigators 7: Kevantia Reckley got on base on an error to lead of the fifth and scored the tying run on a wild pitch and Deamika McIntosh had a one-out walk and scored the winning run on Monique Smith's RBI ground out.

Brendeana McPhee led the way by going 2-for-3 with two RBI and a run scored.

Shalease Russell was 1-for-1 with a RBI and run scored for Andros.

Lady Wildcats 10, Navigators 0: Larikah Russell had a perfect 3-for-3 day with two RBI and three runs; Mary Sweeting was 1-for-3 with three RBI and a run and Linda Knowles was 1-for-2 with a RBI and a run scored.

Sweeting was stingy on the mound with one-hitter with five strike outs.

Habakka Knowles got the only hit with two-out in the third for Andros as Shema Woodside was tagged with the loss.

Lady Wildcats 10, Diamond Dolls 0: Mary Sweeting had another impressive outing, holding Abaco at bay on a no-hitter with two strike outs. She also helped her own cause by going 1-for-2 with two RBI and two runs scored.

Tracey Lewis was tagged with the loss on six hits and a strike out.

Juanyette Curry got hit by a pitch with two out in the second to represent the only Navigator to get on base, but she didn't score for Abaco.