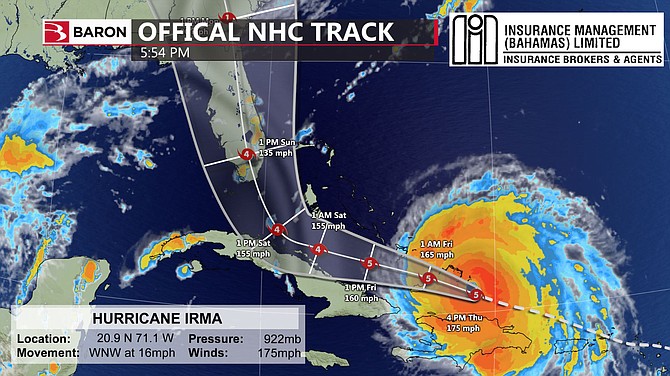 7.14pm UPDATE: BAHAMAS Power and Light (BPL) has announced planned shut downs for various islands in light of Hurricane Irma’s approach, while stating plans to keep electricity on in New Providence for as long as possible once weather permits.

In Long Island, San Salvador, Rum Cay, Exuma and Cat Island, electricity will shut off at 12am Friday.

In Eleuthera and Andros, the power will be shut off noon Friday and at 4pm Saturday in Bimini.

However, BPL said if conditions deteriorate and if power lines are impacted, a controlled shut down will be executed earlier than announced to minimise damage.

“With respect to New Providence, our intention is to keep our entire system operational as long as possible,” BPL said. “In the event that heavy winds and rain impact our overhead lines, then we may have to conduct isolated shutdowns in those areas to protect our system.”

Baron Weather provided this update: “Hurricane Irma is passing through the Turks and Caicos islands currently and looks very powerful on satellite. We have an image as it approached the islands from just before sunset today. The Hurricane will continue moving WNW tonight and will pass between Mayaguana and Inagua overnight tonight. The centre will pass over Acklins island tomorrow morning.

“There was a south and west shift in the track this afternoon from the European model and several other models as well. The new path takes the centre of the Hurricane northward through the entire Florida Peninsula. This slight shift in the track is good for parts of the Bahamas and especially Nassau/New Providence and points north and east of there.”

There was a south and west shift in the track this afternoon from the European model and several other models as well. The new path takes the center of the Hurricane northward through the entire Florida Peninsula. This slight shift in the track is good for parts of the Bahamas and especially Nassau/New Providence and points north and east of there. I have attached images of the latest NHC hurricane path, latest spaghetti plots, a graphic that shows the onset of tropical storm force winds and a storm surge graphic based on NHC forecast.

4.00pm UPDATE: An update from Baron Weather - The latest model guidance and NHC track at 2pm have remained consistent over the past 24 hours. The European model has the centre of Irma moving directly up the east coast of Florida. The GFS model continue to be a little further east, the GFS track would be worse for the Bahamas as the centre of the storm would be closer to Northwestern Islands. The official NHC track has remained steady over the past 24 hours and lies very close to the European model. The worst impacts will occur in the southern islands where Mayaguana /Inagua and Acklins /Crooked Island, Long island and the southern parts of the Exumas will take a direct hit from the storm then the storm will move west. There will be the turn to the right which will occur on Saturday where the storm will shift its track and move NNW. With this track the eastern eyewall will move over Bimini on Sunday. There is still some uncertainty on the impact in the Freeport area.

Hurricane conditions are expected to begin in the warning area in the southeastern Bahamas and the Turks and Caicos Islands later today with tropical storm conditions expected within the next several hours.  These conditions will spread into the Central Bahamas by Thursday night or early Friday. Hurricane and tropical storm conditions are possible within the watch area in Cuba by Friday. Hurricane conditions are expected in the northwestern Bahamas Friday night and Saturday. Irma is expected to produce the following rain accumulations through Saturday: Southeast Bahamas, Central Bahamas, and the Turks and Caicos...8 to 12 inches, isolated 20 inches.

2.10pm UPDATE: The Public Hospitals Authority has released the following statement for staff:

“Please be advised that the Princess Margaret Hospital (PMH) and the Sandilands Rehabilitation Centre (SRC) will fully activate their Command Centers as of 12NOON on Friday, September 8th, 2017.

“All PMH and SRC Staff scheduled to work DURING the hurricane are expected to report for duty at or before 12NOON fully prepared to provide service to the patients within these facilities until the all clear is given.

“All PMH and SRC Staff working BEFORE the storm who are shift workers are mandated to remain on duty until the relief staff assigned for the storm report for duty.

“Non-shift workers are to be guided by official announcements made by the Corporate Office of the Public Hospitals Authority.”

1.50pm: Baron Weather has released a new tracking map (main image) and a GFS model of the predicted storm path.

• Bimini/Freeport likely to be struck Sunday

THE EYE of Hurricane Irma is projected to pass directly over the northern tip of Andros Friday night, according to US Accuweather forecaster Dan Kottlowski, who said the "most dangerous side" of the category five storm will pass over New Providence, Grand Bahama, Bimini and the Berry Islands.

In an interview with The Tribune, Mr Kottlowski said on its current path, Irma is predicted to cause "massive destruction" to the Bahamas similar to Hurricane Matthew's impact in 2016.

He said while most of the country will not get hit directly, the storm will be so close that all the islands will be "highly impacted" with strong winds, high water levels and massive sea surges.

The US National Hurricane Centre warned yesterday that Irma, tied for the second-strongest storm ever recorded in the Atlantic Ocean, is capable of catastrophic damage.

"Inagua will be the first island to get hit, then Turks and Caicos, followed by Acklins, Crooked Island, Samana Cay and Inagua. Those islands will get the full brunt of the storm. This is a very serious storm and there are two features that are going to control how Irma moves over the next two days," Mr Kottlowski said.

"In any event, Irma has picked up speed and is moving faster but the Bahamas is now more in harm's way. This storm will cause massive destruction and unfortunately it looks like it will be a monster when it gets to the Bahamas. The bottom line is it doesn't matter where you are or where the centre of this hurricane goes, people should prepare as if it was Hurricane Matthew. The centre of Irma is expected to move over the northern tip of Andros which means New Providence and Grand Bahama will be in the eastern part of the eye which is the most dangerous part of the eye. People should prepare as if they are preparing for Hurricane Matthew."

Local meteorologist Mary Butler said throughout its passage through the Bahamas, Hurricane Irma is expected to remain a major storm.

"The eye will move closer to the tip of Andros and the western portion of Grand Bahama. Originally in the earlier projections we thought the eye was going across the Florida Keys but as it stands in this new projection the eye is moving along the northern part of Andros," she said.

"In any event the most dangerous portion of the storm will be over Grand Bahama, the Berry Islands, New Providence, and Andros. We will be in the most dangerous part in the capital and we will experience high tropical storm force winds or hurricane force winds. The entire island chain would be on the worst side of this storm and it is a large storm but it doesn't matter if we don’t have a direct hit from the eye, we will all feel this storm."

At least two people have died and two others have been seriously injured in the French islands of St Barts and St Martin following Hurricane Irma according to CNN.

On Wednesday, the fierce storm hit the northeastern Caribbean islands, moving through Barbuda and St Martin. The New York Times reported widespread damage to property, homes, and infrastructure on these and other islands. Communication to Barbuda, a tiny island with a population of 1,600, has been cut off since the storm began, CNN reports.

On Thursday, Irma is expected to graze by the Dominican Republic. By late Thursday, it will be near Turks and Caicos and the southeastern Bahamas.

Still hoping the storm breaks down as it crosses over Hispaniola and Cuba. Miami and Ft. Lauderdale still expected to get the eye

Don't you people proofread anything? Where is Grand Bahamas? SMDH

Shift to the west is good news for grand Bahama. I hope the people in Florida are evacuated or in strong shelters

There are actually FOUR storm systems currently active. There's Irma that has everyone concerned right now. There's Jose that is getting stronger and following in a path behind Irma. In fact it is about to hit some of the islands just devastated by Irma, including Barbuda. There's Kari's that has formed off the Northern coast of Mexico. Then there's a system developing off the Coast of Africa. There's also a system off Canada that seems to be steering both Irma and keeping them from moving North and out to sea. The map looks like somebody's chess game. 'When I move you move.'

Yes a tsunami that may affect California and other interests.

SAD to say Jose now seems poised to go into the Carolinas by next weekend. Lee (the newly formed storm ). Seems to be following the path of Irma and Jose to the Caribbean.

Wow what a active hurricane season. I hope it's not as bad as it seems. Hug those you love. I don't know, but a hug would make me feel better right now.

BPL seems to be intent on shutting down country ex for Nassau.. maybe a bit much? no need to make the whole event more unbearable than it has to be i wud think.... anyway....