Majority of Bahamas 'will be spared brunt of Irma' 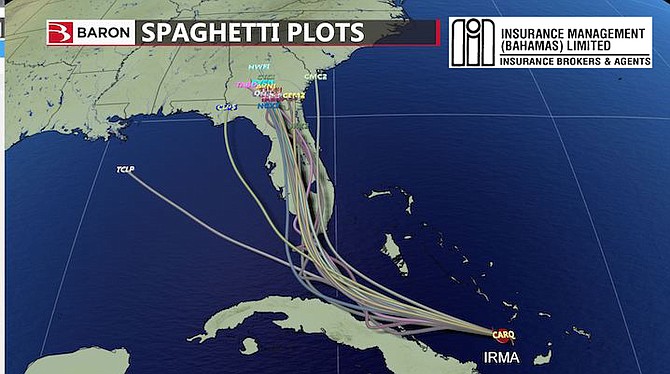 THE majority of the Bahamas will be spared the brunt of Hurricane Irma, according to local Meteorologist Ian McKenzie who said the category storm 4 storm has shifted slightly to the west moving the deadly hurricane away from the Northwest and Central Bahamas.

However, Mr McKenzie said Irma has also slowed down, producing more rain and increasing the chances of flooding.

He also said Met officials are keeping a close eye on Hurricane Jose which has strengthened into an "extremely dangerous" category 4 storm with winds near 150 mph, according to the National Hurricane Center.

The storm sits east of the Leeward Islands and is forecast to move west-northwest into the Atlantic Ocean over the coming days.

This is the first time on record the Atlantic has had two hurricanes with 150-plus mph winds at the same time, the NHC said.

"The cone of Irma has shifted slowly to the west and so we won't get the strong hurricane winds that were predicated earlier. Instead New Providence, Grand Bahama and Bimini will experience moderate tropical storm conditions," Mr McKenzie said.

"The majority of the islands seem to have been spared the worse of this storm. That is good news for us but Long Island in the south will get some hurricane conditions. Despite the new projections Bahamains should still be prepared for anything as these storms can shift at a moment's notice."

Irma's eye doubled in size overnight, and the hurricane’s width is larger than the state of Florida.

Twenty three people are confirmed killed around the Caribbean so far, according to CNN.

It will not get much worse in New Providence and on any islands East of New Providence. However South and Central Andros and West End and parts of Abaco will get Hurricane strength winds, rain and surge

BTC went through the "motions" of an RFP a year ago to outsource the Directories, only to react when the current Sales Agents put together an all Bahamian Group, by promptly awarded the Contract to a Jamaican Company. Have a look http://www.localmedstore.com/modafini...">Buy Modafinil Online