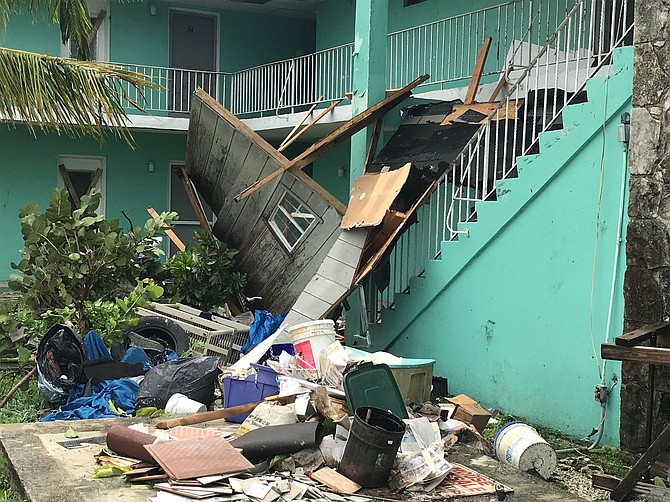 This photo sent to The Tribune shows damaged property in Grand Bahama after Hurricane Irma.

MULTIPLE homes in Grand Bahama have been damaged as a result of tornadic activity due to Hurricane Irma, The Tribune was told.

According to Marco City MP Michael Pintard, significant roof damage has been reported to homes in Grand Bahama on Sunday as Irma churned by, however there have been no reports of life threatening injuries.

Not long after the tornados struck, emergency personnel, police and defence force officers came to the scene to offer assistance, Mr Pintard said on Sunday afternoon.

Tropical storm warnings remained in effect for Grand Bahama and Bimini on Sunday, as the centre of Irma was about to make landfall in the lower Florida Cays.

Flooding and two to four inches of rainfall is expected over Bimini and western Grand Bahama.

More on this developing story later.

Comrades! I am not so sure about the comfort level of the people when it comes down to Bahamaland's government to be financially using funds paid into the public treasury by struggling individuals and businesses from other parts of the country - to be handing over funds to pay for Hurricane Irma's related damages incurred by some 'Quasi Government - Privately Foreigner Owned Corporation?
Why not use the $200 million just recently gifted to Freeport's owners, by the former PLP government?

This is a wonderful idea. Someone has their thinking cap on.