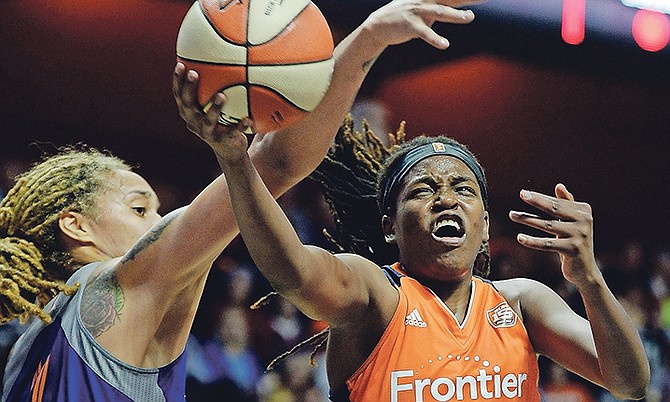 JONQUEL Jones made her WNBA postseason debut yesterday but a standout game from the league’s Most Improved Player was not enough for her team to advance to the semi-finals.

Jones notched a double-double by halftime and eventually finished with 19 points and 15 rebounds in her Connecticut Sun’s 88-83 loss to the Phoenix Mercury at the Mohegan Sun Arena in Uncasville, Connecticut.

She produced the second most rebounds ever in her WNBA playoff debut, but the Mercury’s Brittney Griner got the better of the head-to-head matchup at the pivot spot with 26 points and nine rebounds.

In a game of runs, the teams took a 68-all tie into the fourth quarter.

Jones split a pair at the line to give the Sun a 78-77 lead, but the Mercury responded with back-to-back three pointers to go ahead for good. Jones made two free throws to bring the Sun within three (84-81) with under one minute left to play, but the Mercury sealed the win with four made free throws down the stretch.

The Sun took the early advantage and Jones’ putback gave them a 15-9 lead midway through the first quarter. They eventually took a double-digit lead late in the quarter when Jasmine Thomas sank a pair of free throws to go up 29-18. Jones’ layup on the second Sun possession of the second quarter gave them their biggest lead of the game, 33-18. The Mercury would respond with a late run and eventually trimmed the deficit to single digits and the Sun took a 50-43 lead into the half.

The fifth seeded Mercury advanced to the second round by defeating the Seattle Storm in round one, 79-69.

The Mercury now advance to a 3-of-5 semi-final against either the No. 1 Minnesota Lynx or the No. 2 Los Angeles Sparks.

The Sun won two previous matchups against the Mercury this season, both games in Uncasville, while the Mercury won the September 1 game hosted in Phoenix and yesterday’s playoff round.

Phoenix also came into the matchup as the much more experienced team.

The Sun came into the game with players that have totalled 875 minutes and 302 points, but Taurasi alone, a three-time champion, came in with 1,566 minutes and 1,009 points.

Jones finished the year averaging 15.5 points and 11.9 rebounds per game. She became the WNBA’s All-Time single season rebounds leader with a total of 403.

This season, the Sun improved to 21-13 and clinched a top four seed in the playoff standings.

“I had confidence coming into this year that we had a lot of young talent,” Sun general manager/coach Curt Miller said after his team wrapped up a playoff berth. “Knowing there were still some unknown pieces, it may have come a year earlier than I thought.”