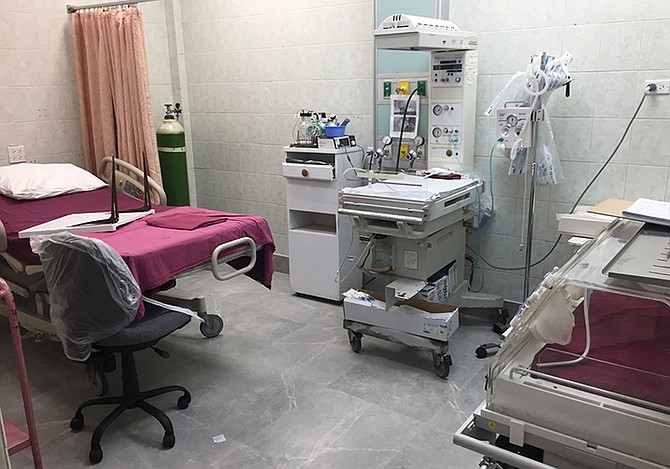 PHA deputy chairman Robert Dupuch-Carron yesterday applauded the efforts of the Obstetrics and Gynaecology staff for taking the initiative in carrying out the changes to the maternity unit.

“On behalf of the PHA chairman Julian Rolle and our board of directors, let me first say hats off to the OBGYN team, thank the PMH Administrator, Mary Walker, and members of her executive team for their invaluable assistance,” said Mr Dupuch-Carron. “Not only have you done a superb job - of which the OBGYN Dept should be very proud - but I am informed the renovations were completed in record time and on-budget; it’s safe to say Drs Dupuch & Griffith-Bowe, that your department has certainly thrown down one helluva challenge for the rest of us.

“I’d also like to take this opportunity to apologise to the citizens of our nation and members of the PMH team who have been forced to obtain medical care and work in such appalling conditions. I have no explanation for the former board’s unconscionable neglect and inexplicable failure to repair the PMH roof and damage to many wards from a hurricane nearly three years ago. Despite the pleas of former managing director Herbert Brown, former PM Perry Christie’s administration blew $234m and executed $90m in contracts for Family Island clinics in the months and days before election and yet left the PMH in disrepair.

“Under Dr Sands and chairman Rolle, the PHA has already completed repairs to most of the roof and executed the final contract. New beds have arrived for the Corey Newbold ward; the A&E project is in final stages of assembling the bid documents prior to a tender for the construction.

“Renovations and shielding for the rooms which will house two new x-ray machines is nearing completion and those machines are already on island. A new CAT scanner is scheduled to be on island next month.

“Next up... renovations to the children’s ward which I hope will include a lovely playroom area.

“After that, it’s all hands on deck in order to raise the private endowment and strategic fundraising which will be vital in order to execute Dr Sands’ ambitious vision of a new children’s/women/A&E tower – managed by a global institution as a Centre for Excellence in the Caribbean - honouring the legacy of all those ‘Little Warriors” whose lives have been cut unnecessarily short before they’ve had a chance to begin.

“Ambitious? Without a doubt! Could we fall flat on our faces? Yes! Without a leader (Dr Sands/Julian Rolle), a unified vision and passion to transform healthcare in our nation; all we are is a new band playing the same old tired tunes!

“I come from The People’s Station, 100JAMZ, Where Hit Music lives!! We ain’t into nuttin’ like dat! I submit that so long as we are united in a single purpose; then the sky’s the limit.”

But to prove the situation is improving, Dr Sands pointed to key projects which are about to come to fruition which will deliver a radically improved situation for patients.

An indicator of that experience was on show yesterday when Dr Sands toured the hospital with journalists and saw the new revamped delivery unit within the maternity department which has undergone a major facelift led by senior staff within the department.

The new unit will provide a new experience for mums-to-be allowing many to have their partners with them during the birthing process.

On top of this revamp, Dr Sands said the health authority is closing in on completion of the renovation to two major wards.

At least one of these will to some degree respond to an ongoing bed shortage at the hospital and relieve some of the strain health officials experience in Accident and Emergency.

During a tour of the aging health facility yesterday, Health Minister Dr Duane Sands said the Corey Newbold ward, which has been gutted since 2016, will soon be completed.

Once operational, 25 beds will be added to PMH's bed count. This ward is housed in the same space as the former male chest ward.

It has not yet been decided whether the new ward will keep the same name.

"There is a problem with overcrowding in Accident and Emergency," Dr Sands explained to reporters yesterday. "This has been a perennial problem and what we have sought to do is to renovate areas in the hospital to accommodate that overflow.

"It has been a horrible inconvenience for patients and their families and so this is the first ward that is virtually, I'd say 99 percent, complete."

So far, the beds have arrived in the country and there are only minor adjustments to be made.

This weekend, the delivery unit in the maternity ward also received a long overdue facelift with new flooring and paint among other things. It used to be gloomy and dark, but the area is now bright and fresh as a result of these minor touches.

Officials also want to make room in the ward to allow partners and spouses in the delivery room during the birthing experience.

According to Dr Leon Dupuch, PMH's consultant obstetrician gynaecologist, this portion of the upgrades cost $25,000.

The money was raised through department funds collected over the years. These funds would normally be used to send junior staff to conferences or given as donations for various nursing projects. 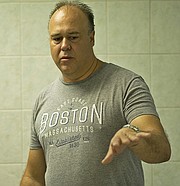 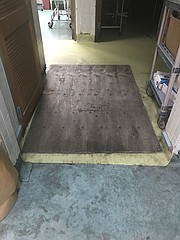 Conditions at the hospital previously.

"Apart from changing the ambience, we have changed the workings of the labour ward in terms of how it's run. Usually there are two beds in each room but what we are trying to do as best we can, is put one bed in each of the rooms so that we can now invite the partners.

"You know when you go private, your husband can come in with you to have your baby but now we are trying to encourage that on the public ward here. We're also trying to start an epidural service as well, which we've never been able to do here and that's going to be easier to do here with the single beds because with the two beds in each room obviously it got a little crowded.

Other major improvements are in the pipeline, Dr Sands said.

"We've outgrown Accident and Emergency," the health minister said. "Matter of fact, we outgrew it 20 years ago. In the meantime, we got to keep soldiering on because there is not a day that people don't need A&E care.

"So the first order of business is expand it to improve it to give it a face lift to improve the staffing and equipment, but all of that in preparation for what's coming with the brand new block and then the private services redevelopment is another project because the engine for revenue for PMH and PHA ought to be private services."

He also said: "The big deal is a brand new maternal child health wing and a brand new emergency room and that wing will be the same magnitude as the Critical Care Block.

"Now when that was designed and conceived, that was already $140m. As you know based on what you've heard about the finances of the people of The Bahamas and the government of The Bahamas, we don't have $140m laying around and so we have been actively in discussion with a number of groups interested in public private partnerships in order to get this done."

The tour also provided a sobering view of how far PMH still has to go. Bathrooms still appear aged and give off a stench. Additionally, a number of areas remain in a state of disrepair since 2016. At the time, they were to be renovated but this was never complete due to the former Progressive Liberal Party government beginning numerous health projects across the country, Dr Sands said.

"Back in 2016, a number of areas would have been taken out of commission ostensibly for renovations. We would have seen beautiful pictures of how things were going to look. So male surgical was gutted, children's ward was gutted subsequent to Hurricane Matthew and then the male chest ward.

"Altogether, 100 beds were taken out of commission," he said.

"Then simultaneously you would note a number of projects were started all over the country in Eleuthera, in Cat Island, in Rum Cay and San Salvador in Grand Bahama and on and on without knowing where the money would come from and then every single one of these projects were halted.

"On top of that, then you've got arrears of millions of dollars to vendors for medication for services for supplies and all those vendors say 'hey if you don't pay me we are going to stop providing you with the goods and services that we normally provide' and so what we have been trying to do is limp along and get all of these things back on stream."

As for a timeline for completion, Dr Sands said: "You got to have the money to do it."