Impact Of Buying Grand Lucayan 'Like Aftermath Of A Hurricane' 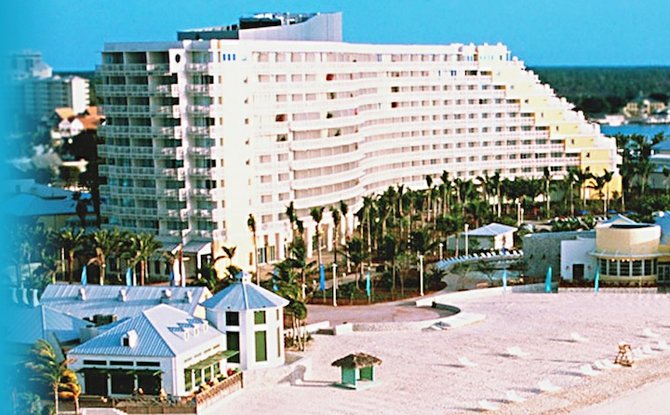 THE government will have to revamp its fiscal projections with its purchase of the Grand Lucayan resort, Press Secretary Anthony Newbold said yesterday, conceding that buying the hotel is akin to dealing with the aftermath of a major hurricane.

"It has to revise its fiscal projections and all of the expectations that it had," he said.

"As you said, it's been likened to a hurricane. That was one of the things the minister of finance said, 'Please God, don't send us a hurricane.' Everything is going to have to be revamped and looked at in those terms.

"This is something the government didn't expect that it would have to do. There's this hotel that's sitting out there, a couple thousand people not working, we got to get involved so the government gets involved. Prime Minister said we got to buy this hotel, well everything that goes with that now has to be factored against what was planned for the fiscal health of the nation over the next several months."

Since coming to office in 2017, the Minnis administration has embraced austerity measures, slashing budgets for government ministries by ten percent and raising value added tax to 12 percent.

During the budget debate, the government emphasised its three-year fiscal consolidation plan that would result in a gradual reduction of the deficit.

"We are one hurricane away from total disaster," Deputy Prime Minister and Minister of Finance Peter Turnquest said earlier this year as he defended the VAT increase.

Yesterday, former Tourism Minister Obie Wilchcombe said notwithstanding the cost of purchasing and renovating the Grand Lucayan properties, it could cost more than $60m per year to operate them. However, he said removing the current owner, Hutchinson Whampoa, provides a good opportunity for the government to act as broker and find either operators or a private buyer for the resort. As for the $65m resort price tag, he said granting Hutchinson Whampoa a tax holiday is an option in the government's tool-kit that could considerably lower the purchase cost.

"I can be corrected, but the Bahamas government today is contributing $15m to $17m a year to the operation," Mr Wilchcombe said of the government's subsidisation of the resort, "and this is down from when the two resorts were operational in 2011 when the government was spending $29m.

"On top of the purchase, which could result in payments of $5m over seven installments, it could cost around $10m to $20m for marketing when you consider that the government has had to contribute $10m to Baha Mar for their marketing.

"The general operations are going to run you into tens of millions of dollars. You're talking about employing more than 1,000 people or more than 1,500 or 2,000 people when you put the three properties together. Then of course there are the general things that go along with it, the food purchasing, etc; it will be too much for the government to carry."

The former minister added: "The government has to find a way to become the broker. It has to find a way to lease-to-own then have in their back pocket a company that would come to the table immediately to take over the property for the government. The difficulty many of the operators had was Hutchinson Whampoa. They thought Hutchinson didn't really want to sell or relinquish its shares or ownership and they found the pricing to be too high for them, so the government, once it takes ownership, then becomes the broker and could find many interested parties."

Asked yesterday if the government is in discussions with an operator to run the hotels, Mr Newbold could not say but noted that is the goal.

"I don't know how soon they will have someone there but you know governments don't run hotels," he said. "Governments never do. Someone else would run it so discussions are ongoing."

On Saturday, Prime Minister Dr Hubert Minnis said this week he will explain the government's Grand Lucayan decision. Yesterday, Mr Newbold could not say when this will happen.

He said Dr Minnis will give a national address next month on September 17 to discuss social programmes like the Over-the-Hill and the small business development initiatives.

Minnis is a jackass if he buys this hotel, considering the current conditions of government finances. And those advising on the purchase of the hotel should be traitors of the country. Why , On God’s earth would this retarded government chose the most expensive and least potential option for rescuing Freeport and Grand Bahama? WHY?

May because in addition to doctoring, science and politics, he always had a yen to be a hotelier?????

Maybe it is a pre-election commitment that he cannot back out of?

Possibly. That would make it a stupid commitment, but then isn't that what politicians are made of, for the most part?

"#"As you said, it's been likened to a hurricane. That was one of the things the minister of finance said, 'Please God, don't send us a hurricane.' Everything is going to have to be revamped and looked at in those terms.

This is something the government didn't expect that it would have to do. There's this hotel that's sitting out there, a couple thousand people not working, we got to get involved so the government gets involved. Prime Minister said we got to buy this hotel, well everything that goes with that now has to be factored against what was planned for the fiscal health of the nation over the next several months.""

This is the dumbest thing I've ever heard. You mean to tell me these guys sit around the table, went through an extensive budgeting exercise running this model and that model doing all this extensive analysis (so they say), and no one thought to ask, hey that hotel was supposed to be sold a year ago, what happens if it doesn't sell?

Maybe the VAT increase was buy the hotel insurance. It certainly didn't make any sense for balancing the budget.

The hotel is a nice property. As Donald Trump would say, It is a very nice property, beautiful scenery and wonderful ocean breezes and Freeport is nice too. But the hotel needs an experienced management team and operator. Not a government that already has financial challenges and no hotel experience What happens after two or three years of pumping millions and millions into this property, giving employees false hope and the property has to close again? Back to square one.

This is without question the WORST EVER decision this government will make. I'd prefer they go the communist route and nationalize it, but make no mistake, this country will pay dearly in the long term for this hotel. SAD!

And if you haven't noticed, stores in New Providence are still closing. Even in the malls and the busy Carmichael Road area. A major clothing chain may have to downsize again if this back-to-school season turns out to be a dud. These stores relied heavily on Social Services back-to-school assistance program to boast it's sales after cutting many smaller merchants out of the market. But now with government cutback and consumers spending less the store is feeling the crunch. In the meantime, other stores are downsizing and moving into shops that have cheaper rent and overhead. The problem is when many people get jobs, they shop online or abroad. So this minimized the impact of Bah Mar's hiring several thousand workers. And the government continue to pile on taxes.

Minnis is bereft of plans to grow our economy and create new private sector jobs. His small mind can only focus on redistributing wealth by flawed government support schemes that further mire our country in debt. He egotistically thinks of himself as the saviour of the needy without realizing that his incompetence and many policy failures to date are simply flushing our country down the proverbial toilet of no return. This idiot and his equally daft sidekick KP Turnquest seem hellbent on foolishly buying the Lucayan Hotel for an exorbitant price with the expectation that it will be corruptly managed by their appointed cronies and financially supported, not by tourists, but by additional government borrowings and another increase in VAT to 15% come July 1, 2019. Minnis is brain dead and it sure as hell ain't the people's time. He is the most dangerous PM our country has ever had, period!

The people of Grand Bahama stand to gain absolutely nothing from the Minnis-led FNM government's proposed foolish purchase of The Grand Lucayan, whereas the people of the Bahamas stand to lose everything. Minnis should be thrown out of parliament if he persists in putting government in the hotel business knowing well its past track record in that business. And just think, he and Turnquest already can't figure out what to do about the continuing mega millions of dollars in losses from the Bank of the Bahamas/Bahamas Resolve debacle yet they somehow now think they can own and hire a management company to run a hotel....give me a break! This could only be a massive swindling of the Bahamian taxpayers at large throughout our country, including Grand Bahamians!!

So they gowan take 5.5 pissent outta ma pawckat and buy one hotel in Freeport? Well lick ma down and cally me mudda