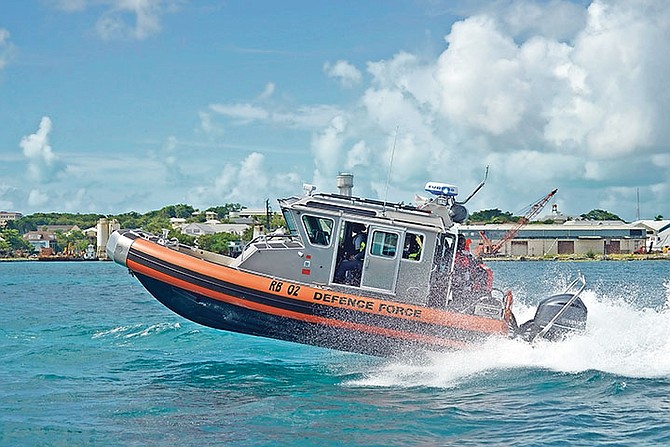 An official ceremony was held yesterday for the handover of a safeboat and accessories by the United States to the the Royal Bahamas Defence Force at their Harbour Patrol Unit on East Bay Street. Photos: Shawn Hanna/Tribune Staff

THE government will soon propose the creation of a "multi-agency task force" whose focus will be protecting the nation's borders, Minister of National Security Marvin Dames said yesterday.

"We're looking at probably proposing very shortly - we have already done all of the background work - on proposing a multi-agency task force, whose responsibility will be to protect our shores; especially New Providence, Grand Bahama, and those islands that are very active," the Mount Moriah MP said.

"And this will go after all of those persons who are trafficking in illicit contraband... who are trafficking in persons, and who are doing any other thing that may be illegal. So we're working at bringing a greater degree of coordination of cooperation and synergy to our law enforcement hence the reason why we're aggressively pursuing this multi-agency task force (whose) sole responsibility will be to protect our borders.

His comments came to reporters after the Harbour Patrol Unit of the Royal Bahamas Defence Force held a handover ceremony to receive a SAFE response boat and accessories donated to the country by the government of the United States.

Expressing his gratitude to the US Embassy, Mr Dames said the event marked a "significant milestone in the bilateral relationship" between the Bahamas and America.

He added that the equipment, which was provided through the US Foreign Military Funding programme, also represented the "continued investment in the security partnership" between the two countries.

"This gift will further strengthen our national resolve to secure our borders through the enhancement of maritime interdiction capabilities of the defence force's Harbour Patrol Unit," he stated.

Mr Dames revealed the donation is worth over $1 million and includes a 25-foot full cabin response boat "capable of speeds of over 40 knots, and a crew and passenger capacity of up to ten persons."

He also shared that the gift is inclusive of a two-week training programme spearheaded by SAFE (Secure All-around Flotation Equipped) Boats International on "familiarisation, operation, boat-handling and maintenance of the vessel for up to 20 persons," and explained that it also comes with a 2018 Ford F-350 extended cab truck "with a boat trailer for launching and retrieving boat spares and safety equipment for up to two years of operations."

"With over six million visitors to our shores annually, mostly arriving by cruise ships that berth at Nassau Harbour, it is critical that the Harbour Patrol Unit, a first responder at the harbour, be equipped to respond to any and all incidents," he said.

"Apart from being tasked with preventing breaches in the cruise ship basin, monitoring boating activities or patrolling neighbourhood beaches, the Harbour Patrol personnel are also tasked with providing critical security against terrorist activity; illegal migration; and firearms and drug trafficking," he said.

Mr Dames acknowledged these tasks would not be possible without "adequate maritime patrol assets".

Also expressing his appreciation, Captain Clyde Sawyer, principal officer of administration, mentioned the "long and mutually beneficial relationship " between the country and the United States in the area of "counternarcotics and maritime safety".

"This gift, this specialised craft will no doubt serve the Harbour Patrol Unit in its essential daily operations and we are thankful for that," he said.

Representing the US Embassy, Stephanie L Bowers, chargé d'affaires, said that she was "delighted" to present the equipment.

"Today's donation highlights the mutual alignment of the goals and priorities of our governments," she added.

Stating that the 25-foot boat was the second safe boat donated to the RBDF by the US government, Ms Bowers explained the vessels were provided to help secure the cruise ship terminals in Nassau.

"The 25-foot SAFE Response Boat is perfectly suited for both inner harbour and coastal patrol missions. I am confident the presence of these patrol crafts will increase the RBDF's ability to ensure a safe and secure passage of the cruise ships that visit Nassau.

"This ceremony marks a milestone in our investment in RBDF maritime operational readiness. As part of this project we previously provided another boat as well as trucks and trailers to support the safety and maintenance of these resources," she stated.

Thanking the US representatives again for their contributions, the minister confirmed the new equipment will be utilised to achieve and maintain "a high level of safety and security" in the Nassau Harbour for both visitors and citizens.

"The commander of the defence force has advised that the SAFE Boat will be used for the continued execution of maritime operations in the Nassau Harbour area including anti-terrorist activity; cruise ship waterside security; maritime patrol and search and rescue operations," he explained.

Da Minister needs to look at a CNN article titled "Drones driven by AI will ttack illegal fishing in African waters" by Katy Scott There is a company called ATLAN Space which is using this. And there are numbrs of uses of drones in Africa to carry medical supplies to inpenetrsble areas, sowing plants, other.