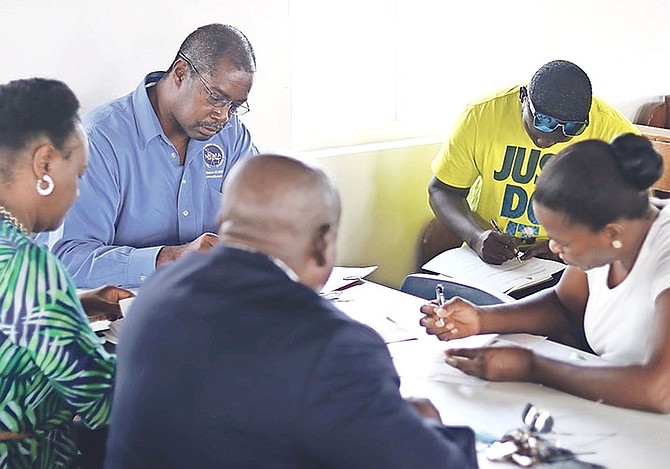 WEEKS ahead of the one year anniversary of Hurricane Irma, which devastated Ragged Island, the National Emergency Management Agency issued more than $70,000 in financial assistance to affected residents.

According to a press release, NEMA director Captain Stephen Russell was accompanied by assistant accountant at NEMA, Eva Lightbourn, and Family Island Administrator for Exuma and Ragged Island Preston Cunningham.

Captain Russell and his team made the visit on Friday to issue cheques on behalf of the government. The financial aid was based on assessments carried out by technical teams of the former National Recovery and Reconstruction Unit, NEMA said.

Following the assessments, 18 households were approved for assistance and received a maximum of $4,000 per household to further assist with post Hurricane Irma recovery efforts.

During the assessments, it was also discovered that approximately 45 percent of the houses affected were not built in accordance with the Bahamas’ building code, NEMA reported.

Captain Russell reminded members of the Ragged Island District Council that they must ensure what is being constructed on the island is built in accordance with legal standards, NEMA said.

In May, frustrated Ragged Islanders demanded the government prioritise critical restoration initiatives as protracted delays had handicapped local efforts to rebuild and restore normalcy to the hurricane-ravaged island.

At the time, the island’s association claimed attempts to rebuild were stalled by the scarcity of potable water and health services.

“They’re talking about making it a green island, which is fine,” said Donovan Moxey in May, a member of the group’s technical planning committee.

“They’ve done studies to determine what it will take. But that’s about 12 to 18 to 24 months away, people need to live now. That’s great you want to make this a green island but people aren’t going to leave and come back, that’s not going to work. Get people back to a certain level of sustainable life.”

The $4,000 should cover a family's food bill for a few months. Or, is that supposed be enough to replace a roof?

If everyone who did/does not carry hurricane insurance and sustained damage was/is entitled to assistance by the Government, can you imagine how high the VAT would go?

"During the assessments, it was also discovered that approximately 45 percent of the houses affected were not built in accordance with the Bahamas’ building code, NEMA reported."

Interesting assessment and one that I am sure will be remembered by certain elements of our society.

"Captain Russell reminded members of the Ragged Island District Council that they must ensure what is being constructed on the island is built in accordance with legal standards, NEMA said."

Of course we are sure that Ministry of Works will do its job this time to ensure that new homes are built to code. Is there a difference between being laid back and being lazy and inefficient?

They should open up an Island Luck so they could just throw all of that money in the garbage like the rest of these dumb Bahamians. Why is the government giving away tax payers dollars to people who have no insurance and do not follow the standard building code? The reason why Ragged Island will forever be stuck in the 20th century. A true handout culture.

Agreed ......... Why are these Out Island communities allowed to develop so haphazardly??? Are there no government officers who ever question the physical planning of these communities??? ....... Typical reactionary response.

This is present from Inagua to Abaco ...... with FI Administrators, MPs, MOPW, Local Govt. etc. and others just letting things slide for decades.

you read this handout, the BOB bailout, the $65mil being thrown at the Grand Lucayan, the $100mil thrown to Bahamasair for planes, the $70mil plus given to BPL staff to leave then be re-engaged and it goes on and on.. any wonder we are billions in debt, going deeper, and ratings in jeopardy etc.?