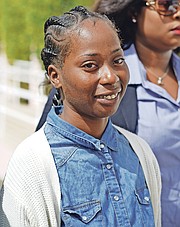 INTERNET sensation Handerea “Miss Florida” Rolle’s criminal trial alleging that she was caught with $1,700 worth of marijuana, intending to supply it to others, will continue early next year.

Police prosecutors told The Tribune that the case is due to start on February 26, 2019 when Rolle, through her lawyer Jomo Campbell, will have the opportunity to lead a defence against the allegations stemming from the February 13 incident.

Rolle, who is currently on bail, is expected to return to court on that date.

In February, Rolle, 41-year-old Kenneth Moncur of Smith’s Lane, and Ilano Noel of Market Street were arraigned on allegations that they were found in possession of 13 ounces of marijuana with an estimated street value of $1,700.

During the trial earlier this year, Assistant Superintendent Zhivargo Earns testified how he had caught Noel trying to flush a bowl of weed on the date in question, moments after he and two other officers broke down the door to a home on Smith’s Lane.

ASP Earns said after catching and subduing Noel, who has since been sentenced in connection with the discovery, Rolle and the owner of the residence, Kenneth Moncur, were found hiding in two separate rooms in the home.

However, Det Sgt Allen claimed that both Rolle and Moncur admitted in their respective records of interview to being aware that Noel was in possession of suspected marijuana, adding that Moncur had said he had agreed to let Noel operate from his home in exchange for payment.

Rolle gained local internet fame and the nicknames “Miss Florida” and “Boss Lady Florida” when a video of her surfaced on the internet in which she seemed not to know that Miami was located in the state of Florida.

She repeatedly said the word “Florida” to indicate where she was, and followed it up with the now famous statement, “Broke people go Miami, I in Florida.”

Another video surfaced shortly afterwards in which Rolle could be seen enjoying herself in a shopping mall, proclaiming: “Boss lady making boss moves. Make that U-turn baby.”