Insight: Succeeding By Degree - All Four Of Them 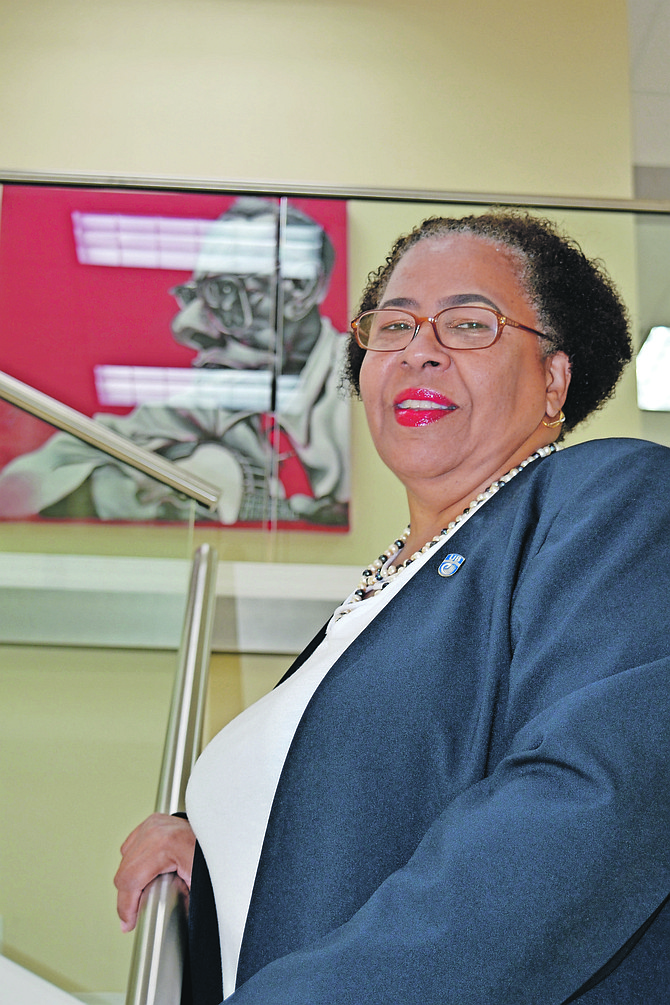 “At the time because my mum hardly knew anyone in Nassau she went home to Dominica for family support in the last stages of her pregnancy with me. However, we returned before I was one-month-old,” recalled Frances. The need for Land Surveyors in the country in the 1950s drew Frances Armbrister’s mother and father to The Bahamas from Dominica for work.

A graduate of the Government High School (GHS) in 1977, transitioning to the then College of The Bahamas (COB) was a natural progression for Frances and many of her fellow GHS classmates. COB still in its infancy, was the educational foundation for the mathematics major who graduated with an Associates of Arts (AA) degree in 1979.

Ten years later, Frances came back to her alma mater to sharpen her skills and remain competitive in the workforce. “I was working but felt I could do more for myself than reading novels every night, so I came back for my second degree,” she explains. She persevered and graduated, this time with an AA in Management in 1991.

The lifelong learner understood the value of a university degree and the professional and financial benefits derived from attaining higher education. In his research on “The Impact of College Graduates on Bahamian Society: With Emphasis on Graduates from The College of The Bahamas”, Director of Planning at University of The Bahamas William J. Fielding, examined the economic contributions of university-educated Bahamians to society.

According to Fielding, based on 2013 Bahamas Department of Statistics data, “the mean annual earnings of a person with BGCSEs is $22,425 while that of a person with an associate degree is $31,609, and that of a person with a baccalaureate degree is $45,866. The statistics further revealed that 3,867 persons graduating between 2000 and 2009 from the College would have earned $86.7 million per year, based upon their BGCSE qualifications. With their College qualification this group would have earned $146.7 million. Therefore, the graduates’ “value added” can be estimated to be about $60 million per year. In other words, these graduates have $60 million a year more to spend in the economy than they would have, if they had not attended The College of The Bahamas,” he states.

For Frances, the financial gains were important as well as the satisfaction of enhancing her professional portfolio which made her stand out from others in her field. “My third degree safeguarded my future, my AA Degree in Office Administration (1999) allowed me to advance on the job, apply my secretarial skills and use new knowledge,” she explained.

In 1999, Frances began working at The College of The Bahamas, now University of The Bahamas (UB), as private secretary and yet again decided to take advantage of the opportunity to learn by going back in the classroom. She successfully completed her Bachelor of Business Administration in Administrative Office Management in 2009.

“A university degree is so important today. With so many individuals in the job market one has to be the best at what they do. Also, with today’s market being so competitive, every edge a person has will help them move up in their respective field. A well-rounded university degree will help you understand your profession better, it should teach you how to deal with people and also enhance your ability as a critical thinker and team player,” said Frances.

Reflecting on her many years of work at UB and in the classroom, Frances is proud of her educational journey. She has led by example in her own family exhibiting in real time the value and transformative power of higher education. She is also proud to have played a role in COB’s transition to university status.

“I am happy to have witnessed the transformation to UB and be part of the institution’s growth and progression. With change may come a level of discomfort but it is sometimes necessary to grow. I believe in order to keep up with an advancing institution, we ourselves must adjust and always have a mind to learn and grow.”