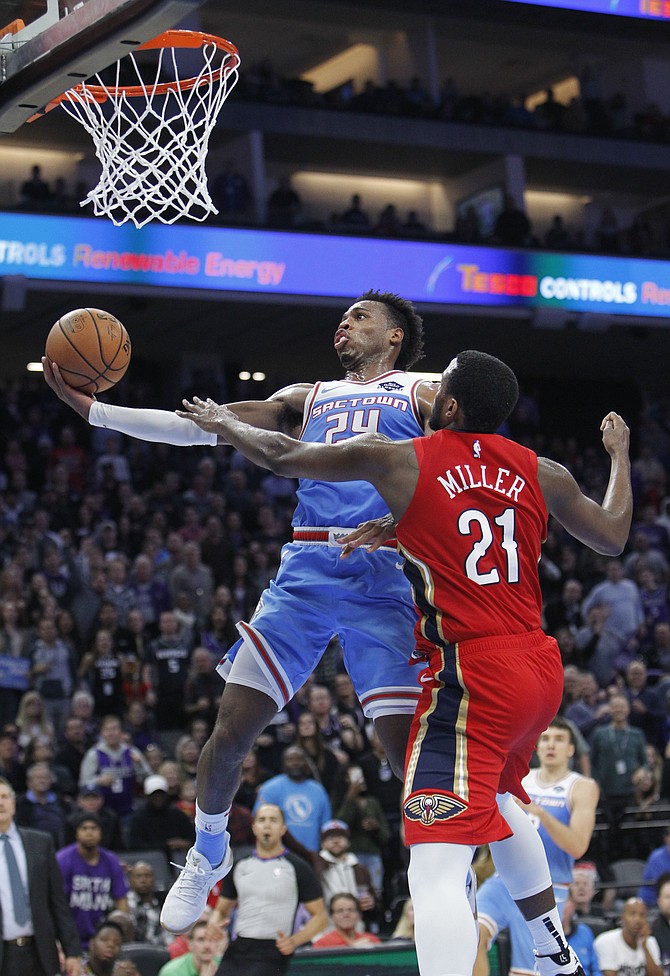 Kings guard Buddy Hield (24) drives to the basket against New Orleans Pelicans forward Darius Miller (21) during the second half on Sunday.

Both Buddy Hield and Deandre Ayton have been playing their best basketball since the calendar shifted to the month of December and the NBA opened voting for its 2019 All-Star Game.

Headed into last night’s contests, both players were posting their best numbers of the season garnering media attention with both individual awards and a budding All-Star campaign.

Hield, the third year Sacramento Kings guard, is averaging 28.2 points and shooting 45.7 per cent on three-point attempts over his last six games.

Hield helped the Kings rally from a 19-point deficit in back-to-back games to beat the Memphis Grizzlies and New Orleans Pelicans, scoring 28 points in each.

“I think the way our playing style is, getting up the court and going fast, it starts with Fox leading the charge. Running with the leader, take the shot if I’m wide open, if not, try to make a play for a teammate.

“Guys are running me off the line because I shot it at a high clip so all summer, me and my trainer were just trying to work on mid-range shots off the bounce and trying to make defences pay,” Hield told NBA TV following the win over the Pelicans.

“I think this offence Dave put in this year just getting the ball up the court, playing at a faster pace, guys sharing the ball, it suits my style of play. It helps me to excel.”

Hield is averaging 20.4 points and 5.2 rebounds per game while shooting 47.9 per cent from the field and 44 per cent from 3-point range. Among shooting guards, he ranks second in 3-point goals, fourth in 3-point shooting, fifth in rebounding and 10th in scoring. The Kings have been one of the league’s surprising teams and are 0.5 games ahead of the San Antonio Spurs for the eighth and final playoff spot in the Western Conference. “This fanbase is always out here supporting us and we want to give them something to cheer about. Getting to the playoffs will be special for them and especially for us with the young group to give us confidence so that we can keep on building.”

Ayton’s play has improved dramatically since Suns leading scorers Devin Booker and TJ Warren have returned to the lineup.

Over the last five games, Ayton has averaged 22.8 points and 15.6 rebounds per game, shooting 67 percent from the field and.

During that time span, he posted three games with at least 20 points and 15 rebounds. He also reached a new career high in rebounding with 18 boards.

Suns head coach Igor Kokoskov has already begun to make his pitch for Ayton’s Rookie of the Year campaign and warned the media not to get lost in the hype surrounding Luka Doncic of the Dallas Mavericks.

“I’ve been reading articles about Luka Doncic, who I coached and have a lot of respect for. Somehow, somewhere in between the lines, Ayton is a pretty good player who is putting up excellent numbers,” Kokoskov said, “If he keeps doing what he is doing. If he keeps doing what he’s doing its impressive. You can feel his presence. Defensively and offensively he’s engaged. He has a chance to be the rookie of the year and he will have all of my support on and off the court.”

“From game to game he’s getting better. He’s working he’s dedicated and I think it was just a matter of time,” Kokoskov said on Ayton’s improvement. He just has to keep doing what he’s doing when it comes to individual prep, working on his body, learning to be pro and all the little things that effect productivity on the court”

There are a number of ways fans can participate in the effort to send both Hield and Ayton to the 2019 NBA All-Star Game, hosted February 17 in Charlotte, North Carolina.

Fans can vote on Google.com by searching Hield and Ayton by name. Fans can also vote at NBA.com/vote and with the NBA App (available on Android and iOS).

This season’s program will once again feature five “2-for-1 Days” which will allow fans to have their votes count twice on January 3-4, 10-11 and 21 through all voting platforms (Google, NBA.com/vote and the NBA App).