Building Plots To Cost Below $30k 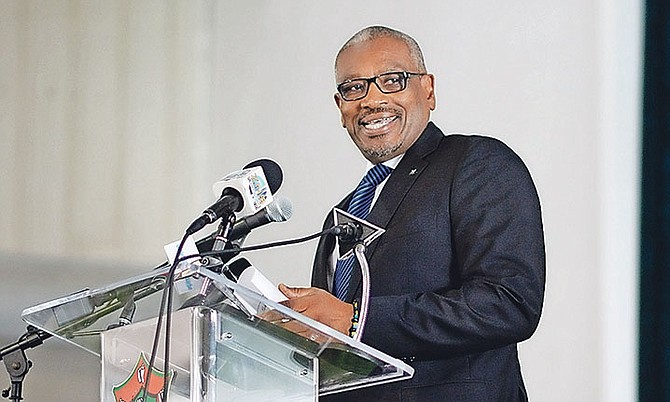 THE low-cost lots to be made available as part of the government’s plan to boost access to affordable housing for Bahamians will be offered at a cost of less than $30,000, Prime Minister Dr Hubert Minnis revealed yesterday.

The Minnis administration also intends to make the plots of land available in May or June, after the government’s new fiscal budget presentation.

While he still did not reveal where the lots will be located, Dr Minnis insisted this plan was certain to deliver big savings to potential homeowners.

Last month during a national address, Dr Minnis said the lots would be equipped with the necessary utilities, but buyers are expected to be responsible for building their own homes.

“There are many Bahamians who want to own homes,” Dr Minnis told reporters yesterday. “Unfortunately, the average home today may cost anywhere from $180,000 and up. That is very cost prohibitive to the average Bahamian and therefore we are introducing a programme and therefore we’ll have lots available right after the new budget (in) May (or) June.

“Those lots will be sold with all the infrastructure amenities attached to it and be sold at very, very low prices. So, the only thing that I can say to give you a ball park figure (is) that they will be less than $30,000. Now the exact cost I will not reveal because you know the press tags you to that and so if you can purchase a lot at that price and construct your home duty-free and you remove all of the second payment and the possible corruption, etc, you will be able to construct your home at a very low price.”

“I think it’s a great opportunity for Bahamians to own their own homes,” he said.

At the same time, Dr Minnis said this was a chance for development to take place on the Family Islands where economic activity is slow moving.

“It would allow Bahamians in the Family Islands to buy properties for bed and breakfast facilities and again at minimal cost and using the same concept they would now own hotels in the Family Islands and the eco-hotels is where we are going in the Family Islands. We don’t want to find ourselves 15 or 20 years from today where all the second homeowners are foreign nationals and then they are leasing them out as a part of the hotel pool.

“If we don’t take charge of that now, 15 or 20 years from today the Bahamian will be marginalised from Family Islands. So recognising that we want to ensure that they are a part of it now moving forward.”

He made the remarks following a tour of The Pointe on Bay Street yesterday. Pointe officials have pledged to the government to upkeep an agreement to employ 70 per cent Bahamians to 30 per cent foreigners, Dr Minnis said.

When he revealed the low-cost lot plan last month, Dr Minnis said homeowners had the option to use their own architect or use pre-existing plans offered by the government.

They will also have two years to build homes at duty free concession rates.

It has been a long-standing policy of the government to offer low-cost homes to Bahamians, with the Department of Housing facilitating the construction of affordable housing to low and middle-income Bahamians.

Last year, Minister of Environment and Housing Romauld Ferreira announced the government planned to spend $2 million to complete 300 homes in the Carmichael Village Subdivision during the fiscal year.

Ma Comrades, Prime Minister promises if you can purchase a lot at that price range $30,000 and construct your home duty-free, and you remove all the "possible" corruption, etc. you would be able to construct your home at a very low price. The most honest statement by a sitting PM and an ambitious new home buyers program but "removing all possible corruption" something no UBP, Red or PLP governing party has got around to delivering on?
It is smart government remove itself from building the actual homes.....and there also has be restrictive and clearly stated safeguards put in place to block land speculators... the land must NOT sold a minimum of 5 years and if sold the buyer must pay back the price by which the land and construction materials were subsidized by the public purse... nor be offered or allowed be neither front or back door bought by speculators - nor non-citizens. Penalty if caught abusing, shall be swift forfeiture of land and any dwelling constructed and three years imprisonment - including Fox Hill stay for lawyers facilitating such crooked land grabs.

I applaud his efforts, truly. It is sad however that after we gained independence from the Queen we still have to buy her Crown land. We are "independent" but with nowhere to set our foot.

As a side note - if Nygard Cay was a shanty town, would the well known QC be so active on the issue?

Nygard is nothing but a minnow in the grand scheme of government corruption. We Bahamians have much bigger predatory fish to worry about. See link below.

Although it is termed crown land, this is just on paper. In reality it is owned by the Bahamian Government

Mudda Sic - you are right and so is the FBI Director - but the threat does not apply to Bahamians.

We miss the old slavery days and want them to come back soon - that's why we shop at all the Chinese food stores and drink and smoke outside all the Chinese take-outs. We are giving them our money so they can take care of us. The shackles around our necks will be stamped "Made in China".

Land in Nassau under $30, 000 has to be in an area that will flood with drizzle!

Excellent to have low cost lots for the needy. MACKEY YARD FIRE DESTROYED SHANTY LOTS WERE GOING FOR 17K FOR 50X100

Suggest it is better to have controld to manage the msny varibles for first time homeowners. Suggest govt put out to tender construction of working hurricane structurally fuinctoonal homes and performance bond. One or two large builders getting economies of scale to get homes siccessfully finished ptoduct than many grandiose incomplete structures....people alwyys try to get the most for the least....and which may mot be thd right formula....

Comrades, if you applied the same public purse subsidiaries it's also reasonably offer "Tiny Starter Homes" to the poor and near poor working citizens for $25,000 per construction cost - and that's a move-in price - minus furniture's and your yarding landscaping.

Bogart.....LOL. Nobody can produce a Treasury stamped conveyance of a shanty lot for 17 cents, let alone 17K. Where do people hear these jokes?

The Nassau Guardian 15 July, 2011 'Housing Minister denies land Giveaway' lots at 3.40 per sq foot 15 or so paragraphs down....17,000 forf lots 5,000 sq ft Also see bshamasnational. com 13 February, 2018.....lots at 3.40 per sq ft Today govt can offer lots at under 30k or any price they choose to assist those in need. Id rather see organized construction on shamtytown land than unchecked breaking of building codes latrines and wastes, biohazard illegal medicals??diseases,, toxic chemocals waste oils engine, transmission, getting into the water table, electricsl hazards, fire hazards, rtc that costs. While they are a hazard to themselves they are a much greater hazard to the large surrounding population of unsuspecting Citizens who pay and follpw the legsl codes. All latrine wastes are in the ground water and dropping 2 chlorine tabs in well only has themm sticking in the mud while you brush your teet wid pump water. On the sizes of lots perhaps what yhe govt can do os to make the lots 25x 100 and hou need at least 2 lots or persons can buy 3 lots, I believe this was tried before in Pinewood or Nassau Village. Suitable designs are necessary so that everyone benefits with safety and prices going up for all.

Guardian article 27 July 2011 'Housing Minister seeks to clarify Mackey Yard Policy' by Juan MacCartney Article says policy with both govts and land value without sewer system around $5,000. ........ As for conveyances many conveyances sre in chain of title docs as Deed of Gifts where its was around $1. conveyed love and affection, there should be deeds of Equity of Redemption in the system for small sums etcetc..the govt has blocked this loophole I believe for persons ducking taxes...one large loophole existed in merging companies as equals and then one buying out the other...challenges now in Abaco over valuations for RPT....under or over valuing properties is always a problem . You have Appraisers who been to school gor 4 years and you have Real Rstate Salespersons with qualifications in Appraisals on valuing properties...

Well.... i stand corrected. I never knew there was such a prim and proper real estate trade going on with shanty town lots. My bad.

The next time i walk through i will keep an eye out for the little cement surveyors markers. I must have missed them last time.

...almost always when the land becomes overgrown a tractor, payloader more economical is called in to clear the brushes which bushwackers cannot remove small trees and almost always the tractor operator ppushes the debris inck markers over the boundary line if the other neighbour or govt is not looking. .....Bey na waste time ....why na why not put in fer a piece a cheap lan....Cann hurt fer trying ..fore dawg eat ya lunch....talk to ya homeboy .....use ya hookup...talk to ya MP....give it a try an see if you can get strait wid ya MP an piece a govt lan.

The land is cheap for a reason!!!

......possibly class action lawsuits by residents surrounding shantytown for any illnesses.....but feels fairly confident Dr. Minnis genuinely wants to give qualified Bahamians to achieve home ownership. Given average starting salary of $18,000 and mortgage loan debt service ratio of 45% of monthly salary 18,000/12= $1,500 then 45%= $675. For loan payment NIB ETC reverse amortize 675 less legal commitments at say 5%interest should give reasonable pricing of affordable land PROVIDED THE FINANCIER HAS A DUTY OF CARE FOR CLIENT TO SURVIVE ETCETC.....guilty of negligence, dut y of care and acting in good faith if loan officer or bank approves loan knowing that it will fail. ....then fraud examination and jail....Each must be examined stress tested to see if applicant is telling truth etcetc simple math.....and if second income needed, or deed of guarantees if cannot fit must acquit with denied. Must not force a loan through to meet bonus or salary increase by loan institution.

Finally someone has used Central Bank data to reverse engineer mortgage process what the target market to benefit most Bahamian can qualify for and with a good chance to succeed to own a home. Reducing Govt Bahamian owned land value and reducing materials cost sacrificing Stamp duty to fit customers capability.

Govt officials knowing the data to qualify should now investigate how in the world 4,000 plus mortgage accounts ...( usually joint two or more persons income to qualify 8,000 Bahamians?) went bad tying up extraordinaroly some 1 billion il bad debt loans!! Recent allleged stories in press over alleged money laundering in a number of banks has data extrapolated on mortgage payment in excess of 45% plus another article case involves customer with 10k to deposit sold 10 separate accounts so bank officer can get a point for each account!!

Billion dollar bad debt cannot be all blamed on the customers and invrstigations are needed now that govt has shown its hand and knowledge what it takes to succeed!!