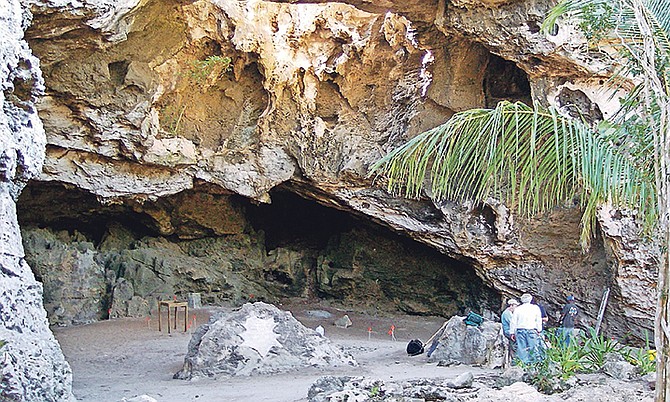 AN international team of scientists, led by Dr Hannes Schroeder and Professor Eske Willerslev from the University of Copenhagen, successfully reconstructed the full genome of a Lucayan-Taino individual from a thousand-year-old tooth discovered at Preacher’s Cave on Eleuthera.

Previous attempts to extract DNA from other samples from archaeological sites across the Caribbean had limited success because of the poor preservation conditions common throughout the tropics, a press released from researchers noted.

The findings are published in the journal Proceedings of the National Academy of Sciences. The results indicate that the Lucayan-Taino ancestry can be traced to northern South America. The researchers also found evidence that the Taino, the first indigenous Americans to feel the full impact of European colonisation after Columbus arrived in the New World, still have living descendants in the Caribbean today.

The tooth Dr Schroeder and his colleagues used to reconstruct the genome was discovered by an archaeological team directed by historian Dr Jane S Day of Research Atlantica Inc under the field direction of Robert S Carr, director of the Archaeological and Historical Conservancy, and identified by bioarchaeologist Dr William Shaffer of Phoenix College. The tooth was recovered in 2007 as part of an extensive study of Preacher’s Cave, a Bahamian cave used for shelter by the Eleutheran Adventurers, the first English colonists in The Bahamas, who were shipwrecked on north Eleuthera in 1648.

The archaeological team was surprised to discover intact Lucayan-Taino graves within metres of the Eleutheran Adventurers’ cemetery. The project was carried out with a permit and support from the Antiquities, Monuments & Museum Corporation (AMMC), and funded by the Ministry of Tourism working toward the goal of establishing Preachers Cave as a National Heritage Tourism Park. The picturesque cave is a protected archaeological site that will enhance tourism on Eleuthera and The Bahamas.

Researchers were able to use this tooth to sequence the first complete ancient human genome from the Caribbean. The individual studied was a woman who lived between the 8th and 10th centuries, at least five hundred years before Columbus made landfall in The Bahamas. The results provide unprecedented insights into the genetic makeup of the Lucayan-Taino. This includes the first clear evidence that there has been some degree of continuity between indigenous peoples of the Caribbean and some contemporary communities living in the region today, despite the devastating effects of European colonisation. Such a link had previously been suggested by other studies based on modern DNA. None of these, however, was able to draw on the ancient genome. The new research finally provides concrete proof that indigenous ancestry in the region has survived through to the present day.

Crucially, researchers found that the Native American component in the genomes of contemporary Puerto Ricans corresponds more closely to the ancient Lucayan-Taino genome than that of any other indigenous group in the Americas. However, they argue that this characteristic is unlikely to be exclusive to Puerto Ricans alone and are convinced that future studies will reveal similar genetic legacies in other Caribbean communities. In Eleuthera, Dr Day and Mr Carr collected numerous oral histories that suggest some residents of The Current are descended from the Lucayan-Taino.

The researchers were also able to trace the genetic origins of the indigenous Caribbean islanders, showing that they were most closely related to Arawakan-speaking groups who live in parts of northern South America today. This suggests that the origins of at least some of the population can be traced back to the Amazon and Orinoco Basins, where Arawakan languages developed, confirming existing arguments based on archaeological evidence of Taino migrations from South America northward through the Antilles.

I will keep this in mind the next time we celebrate "Colombus Day" in the Bahamas - which i believe is currently scheduled for Neverary 32nd.

He was a white man and we don't celebrate them no moe.

A great many of us do.

There we go Ma Comrades Dr Hannes Schroeder and Professor Eske Willerslev comes along to confirm with certainty what I has long been blogging to correct those calling King's Counsel Freddy's deportation to Haiti- that his native ancestry on Grandma's side family does stretches 1000 years backs Lucayan-Taino's the original inhabitants of the Bahamamaland long before the arrival of Europeans and Loyalists eager remain all loyal to da King England with their negro slaves in tow. Case is closed on King Counsel's deportation being all along Freddy's history been right there cave.

Can we start DNA testing to find out what percent of Bahamians have Taino roots???????

the tainos lived on and married members of the house of assembly.

That's an insult to the tainos.

I challenge Renward Wells & Tellis Bethell to give an explanation as to why this crap is still not under control. Where are all these RBDF patrol craft we recently paid thru the ass for, aside from those just pulled off the reef? These people are stealing our resources in broad daylight while flipping us the bird, so much for Fred Mitchell's diplomatic efforts in the DR.

So, they're not doing it anymore?