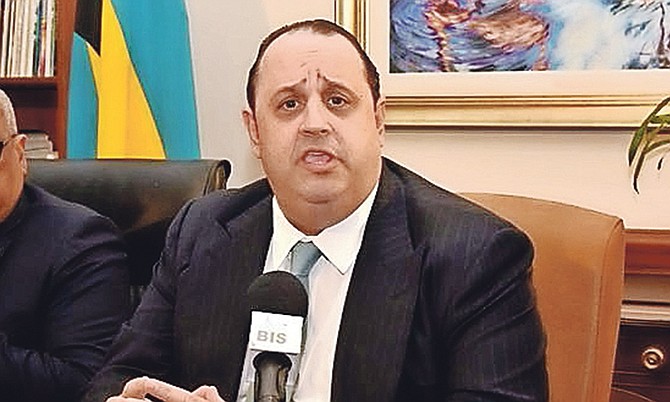 GOVERNMENT officials yesterday were tightlipped about who the beneficial owners of Oban Energies are, though some quietly described Peter Krieger, the public face of the project so far, as a small player in the grander scheme.

Two top officials in the Minnis administration, speaking anonymously to The Tribune, said the main people behind the project “would pass any test anyone could put out there”, adding this explains why officials are not troubled by recent revelations about Mr Krieger.

For her part, Candia Ferguson, director of investments at the Bahamas Investment Authority (BIA), told The Tribune she is satisfied that Mr Krieger, the non-executive chairman of Oban Energies whose controversial past has made headlines this week, is just an ambassador for the company.

Ms Ferguson said BIA performs due diligence checks on beneficial owners of companies that seek to invest in this country, noting Mr Krieger has not been disclosed as a beneficial owner.

What this means about whether background checks were performed on people like Mr Krieger and others publicly identified as executives of the company so far was unclear yesterday.

Asked who Oban Energies’ beneficial owners are, Ms Ferguson said the heads of agreement, which was expected to be tabled in the House of Assembly on Wednesday but is now slated to be tabled next week, will address this.

Asked if she believes too much attention is being focused on Mr Krieger and his role in the project, she did not answer directly but suggested there is much more to the Oban Energies project than has been revealed so far, saying: “I think it’s premature to speak about things that are unseen.”

He was asked to do so by former State Minister of Finance Zhivargo Laing on his 96.9 FM talk show.

Mr Laing expressed confusion about the ownership structure of the company and asked Mr Thompson to clarify this, but the senator said such information should best come from the company itself.

In the absence of information on the owners, attention has focused on Mr Krieger, who has faced a Securities Exchange Commission (SEC) lawsuit alleging misappropriation of millions in investor funds.

Mr Krieger also pleaded guilty to first-degree felony of organised fraud in 2006. He has been barred in the US from acting as a broker or investment adviser or otherwise associating with firms that sell securities or provide investment advice to the public.

Other people so far identified as executives of the company have also faced scrutiny in the face of revelations that their qualifications may have been exaggerated or misstated.

Dr Minnis, seeking to reassure people due diligence was conducted, had insisted Wednesday that former administrations were aware of the concerning facts that have emerged since Monday’s signing of the heads of agreement.

However, Mr Davis said: “We did not enter into a heads of agreement with them. My recollection is we issued a letter indicating our approval of the project subject to compliance with requirements of various departments of government, the Ministry of Works, the Ministry of Finance, proper vetting, etc. Once those agencies provided indication the project could proceed, which would have included due diligence on their part, then a heads of agreement would have been entered into. Very often, that agreement would contain conditions or granting of concessions that would have to be considered by these various agencies.

“In regard to determining the fitness of individuals, that would have come along later. We would not have gotten that far to form a view on those matters. I doubt the government would’ve been aware of that, neither the advisors nor technocrats who would advise the government on the way forward. From where I sat and my appreciation of the way things were done, I would be very surprised that anyone in government would be aware of these matters you are now speaking of,” the former deputy prime minister said.

Meanwhile yesterday, Oban Energies, their engineers and environmental teams, including local and international experts, met with BEST Commission and members of the local government committee for East Grand Bahama.

The meeting at the Office of the Prime Minister in Grand Bahama was set to conduct preliminary discussions regarding the project, according to Bahamas Information Services.

“This meeting constitutes the first in a series to take place between Oban Energies, BEST Commission and local government authorities,” BIS said.

Trumpism in USA, KickAssism in colony but means same - throwing 'em under da bus whilst rejecting Krieger could ever have played important role. Ma Comrade Krieger - who?
I thinks knowing what we now know only Nine-months into mandate - we all owes Loretta our apologies.

When the "public face" of a company, the person who best represents the company, has a very checkered past, I am intrigued to find out who the incognito owners of the company truly are (and why they are "silent" owners)..

Ma Comrade ConchFretter, I been doing some deep and wide digging into who locally might just be pulling the strings.....sounds more like made in Bahamaland kinds deal surety - where handshake on this deal is same shaking someone foot. There was also a company called Mid Atlantic Group who supposedly had proposed a similar Grand Bahama sludge oil project to our government a few years back.... which means this project has had lots foots and fingers to talk about?

Israel has a president who was charged with corruption, UK, USA, CA, France, USSR, . . .EVERY NATION ON THIS PLANET. . .EVERY FORTUNE 500 COMPANY DID AS WELL. . .AMNESTY INTERNATIONAL, OXFAM, OLYMPICS. . .HELL EVEN THE VATICAN! Did I leave out anything? I will wait for yinna to show me any nation, company or organizations (ngo or gos) on this planet that do not have people leading or owning them that do not have "questions" in their past! Our beloved LOP and current GG, PM and Leader of the Opposition all have "dirt questions" in their past! THEM ARE THE FACTS! DEAL WITH THEM!

Israel has a president who was charged with corruption, UK, USA, CA, France, USSR, . . .EVERY NATION ON THIS PLANET. . .EVERY FORTUNE 500 COMPANY DID AS WELL. . .AMNESTY INTERNATIONAL, OXFAM, OLYMPICS. . .HELL EVEN THE VATICAN! Did I leave out anything? I will wait for yinna to show me any nation, company or organizations (ngo or gos) on this planet that do not have people leading or owning them that do not have "questions" in their past! Our beloved LOP and current GG, PM and Leader of the Opposition all have "dirt questions" in their past! THEM ARE THE FACTS! DEAL WITH THEM!

Licks2, I at least know who these 'questionable' leaders are! I can sort out the controversy for myself and determine how "questionable" the questionable people are. I know who the leaders of the UK, USA, France, (USSR does not exist anymore- now just Russia), Amnesty and the Olympics are... BUT I do not know who leads or owns Oban Energies -- just the non-executive "Ambassador" Chairman. That is my point.

WHO OWNS COMMONWEALTH BANK, CABLE BAHAMAS, ALIVE, BAHA MAR, ATLANTIS, SAMMY CHICKEN, KENTUCKY CHICKEN, SKY BAHAMAS ETC. . .that question is moot. . .put the money on the barrel head and the world don't give one flip who are the players in back. . .it is the "the black crab syndrome" that want to know who are them players with some dirt on them. . .when in fact it has nothing to do with them players. I am more worried about the money on the barrel head. . . THIS WHOLE PLANET IS CHUCKED FULL OF SLIMY PLAYERS WHO ARE JUST IN IT FIR THEMSELVES. . . JUST CHECK WHO ARE INVOLVED IN THE BIGGEST BAHAMIAN OWNED COMPANY. . .SUN GROUP. . .CALL OFF ANY ONE OF OUR BIG SLIM BALLS WHO DONE PLENTY SHED IN THIS NATION AND CHANCES ARE YOU GOT RIGHT TWO TO ONE! GO FIGURE!

"Black crab syndrome?" Why you got the pot calling the crab black?!? LOL!