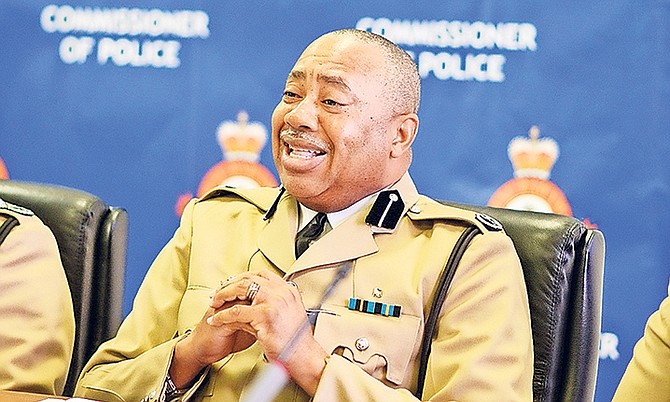 MURDERS in Grand Bahama deceased by 9.2 percent in 2017 compared with the previous year.

Assistant Commissioner Clayton Fernander, the officer in charge of crime investigations, said 11 murders were committed in Grand Bahama in 2017 compared with 18 in 2016.

He noted there was a slight increase in murders in the Family Islands, with seven murders in 2017 - three recorded in Abaco; and one each in Acklins, Bimini, Cat Island and Long Island.

In 2016, ACP Fernander said there were four murders recorded in the Family Islands.

“We will extend support to the Family Islands to assist in the prevention of serious crimes,” he said.

He also attributed success to the Anti-Gang and Firearm Flying Squad, Rapid Response Unit, along with all operational uniform units.

ACP Fernander noted that as a result of the number of people charged with murder, the police force achieved a 55.74 percent detection rate in 2017.

He said most murders committed last year were by use of firearm. Some 327 firearms and 9,183 rounds of ammunition were taken off the streets and away from criminals, he said.

He said the RBPF continues to see trends increase in gang activity and conflicts related to drug turfs.

“We will continue to target offenders to stop illegal firearms from entering the country and getting in the hands of criminals,” ACP Fernander said.

He also said the police would continue its partnership with US counterparts to disrupt the flow of guns and target drug dealers.

ACP Fernander said police would continue monitor persons on bail and target hot spots. “We believe in consistent police presence in our communities and initiating a focused approach to minor crimes as they lead to bigger crimes. As a country we cannot sit back and see another month of 15 and 20 murders.”

When asked about programmes geared towards youth in Grand Bahama, senior police officials noted they would continue to partner with people in local communities and to speak to youngsters to discourage them from getting involved in crime.

Two juveniles - a 15 and a 16-year-old - were charged with two separate murders that occurred in Grand Bahama earlier this month.

He said in 2017, over 600 youngsters participated in the programme.

At least two of the murders on Grand Bahama and the discovery of two bodies in Abaco may eventually be linked to the gang/drug/turf warfare that is going on in New Providence. As former gang members and drug dealers flee the capital in fear of their lives, their violent and criminal past seems to be following them. The police must now ensure that these gang wars do not destroy the peaceful and tranquil lifestyles on the Family Islands. Also to keep in check the lull on New Providence caused by gang members, fleeing, hiding or being killed.