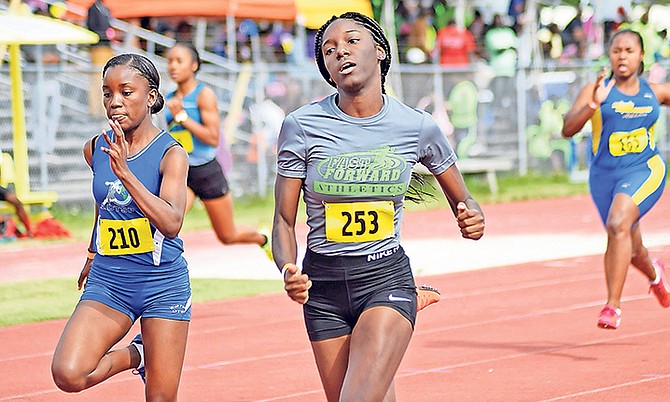 WHILE Jaida Knowles and Anthaya Charlton took advantage of the competition at the McKenley-Wint Track and Field Classic at Calabar High School in Kingston, Jamaica, to surpass the CARIFTA qualifying standards, six athletes attained the standards at the Roadrunners Track Classic on Saturday.

The Bahamas is preparing to host the CARIFTA Games for the eighth time at the Thomas A Robinson National Stadium over the Easter holiday weekend.

No other standards were achieved in the under-20 boys' division, but Club Monica's Adrian Curry was just shy of the standard in the 100m when he clocked 10.61. The qualifying mark is 10.60.

One mark was also accomplished in the under-20 girls' division as Gabrielle Gibson of the Sunblazers ran 13.96 to go under the standard of 14.00 in the 100m hurdles.

Shiloh Molly of the Stallions Track Club won the boys under-7 80m and Fransa Pickstock of the Ambassadors Track Club took the 200m.

Vanessa Mackey of the Alliance Track Club won the girls' under-9 100m and Zara Fraser of Fast Forward was the winner of the 200m.

Kamrom Henfield of Kids' Athletics doubled up in the boys' under-9 division, winning both the 100m and 200m.

Darvinique Dean of Kids' Athletics was the winner of the girls' 100 and 200m and Azarria Marshall of the X-Treme Athletics won the 800m.

Kion Burrows of the A,mbassadors Athletics doubled up in the boys' under-11 100m and 200m and Zaiah Henfield took the 800m.

Sarah Hepburn of Fast Forward won the girls under-13 100m; Lanique Thompson was the winner of the 400m and Jasmine Mackey of the 3P A Stallions won the 800m.

Najae McBride of Spirit of Excellence won the boys' under-13 100m; Tyrone Conliffe of the Rock Athletics won the 400m and Raymond Winder of Hurry Murray Athletics was the winner of the 800m.

April Adderley of DTSP Wolfpack won the girls' under-5 100m ; Paige Archer of the X-Treme Athletics won the 200m; Adonya Taylor of Fast Forward was the winner of the 400m and Javonya Valcourt of Fast Forward won the 800m.

Kasha Neilly of the X-Treme Athletics won the long jump and Anne-Marie Oriaki of Triple Threat won both the shot put and discus.

And in the boys' under-15 division, Zachary Evans of Club monica won the 100m; Daniel Ermilius of the Roadrunners won the 200m; Shimar Bain of Club Monica took the 400m and Matthew Hendfield of the Rock Athletics was the winner of the 800m.

Otto Laing of Club Monica, won the long jump and was second in the 400m.

Knowles and Charlton led a six-member team from the Star Trackers that participated in the meet. The other four members were Chigozie Ijeoma, Trent Strachan, Bailee Miller and Tanae Dorsett.

Competing in the Class 2 girls' 100 metres, Knowles and Charlton ran personal best times of 11.89 and 12.03 seconds as they took the top two spots, winning their respective heats. They both dipped under the under-17 girls' Carifta standard of 12.06.

Knowles was also entered in the 100m hurdles where she won her heat in a PB of 14.82 for fifth overall, which was off the standard of 14.64, while Charlton was also in the long jump where she ended up ninth with a best leap of 4.85 metres. She too missed the standard of 5.55m.

Ijeoma competed in the Class 2 boys' 110m hurdles where he was fifth in his heat in a PB of 16.54 for ninth place overall.

At the Larry Wieczorek Invitational at the Iowa Recreation Building, Devynne Charlton picked up a second place finish in the women's 60m hurdles.

While she ineligible to compete indoors for the Purdue Boilermakers, Charlton still have an outdoor season before her collegiate career is done.