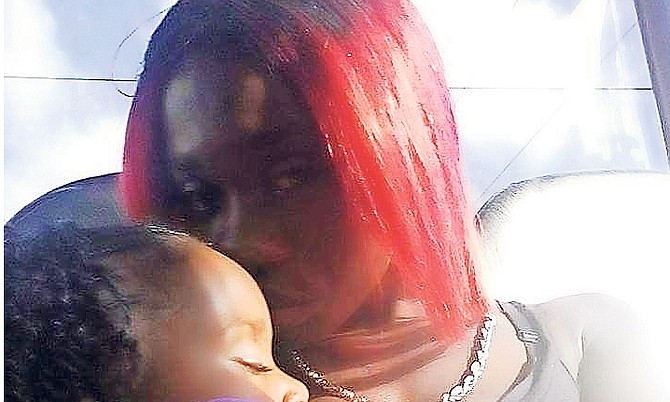 THE family of a 19-year-old girl stabbed to death in the street by a gang of women last night branded her killers as “savages” who deserved to hang.

Breanna Mackey, pictured, was walking on Key West Street on Thursday evening, shortly before 6pm, when she was brutally attacked by three women who emerged from a silver coloured Honda.

According to police, Mackey was stabbed multiple times before her attackers jumped back into the car and sped off.

She was rushed to hospital, but died of her injuries. She had just celebrated her birthday the previous day.

Last night her sister Tonia Sturrup told The Tribune the family had been left devastated by her brutal killing. Mackey’s three-year-old daughter Bre-Ne still cannot understand what has happened.

“She keeps asking, ‘When is my mummy going to get up?’” her sister said.

According to Ms Sturrup, the killing involved a row between Mackey and some girls over a broken cell phone.

“These young ladies were supposed to be her friends,” Ms Sturrup said.

“It seems one of them had handed Breanna her phone and it had slipped and the screen got broken. The girl kept demanding Breanna buy her a new one.

“Breanna was outgoing, spirited, fun-loving girl. Everyone she came into contact with fell in love with her. If you asked her for anything if she had it she would give it to you. She loved to party and lived life to the fullest.

“These girls had to be jealous.”

The family’s distress over Mackey’s murder has convinced Ms Sturrup something has to be done to try to prevent the seemingly endless killings taking place around us.

“I try not to hold animosity in my heart, but what they did to my sister was so uncalled for,” said Ms Sturrup.

“They took her away from her daughter.

“Now I just want the court system to deal with this to the utmost extent. I believe we should start hanging. Those who commit murder should be hanged.

“We cannot feel Breanna ever again, we can never touch her, but at the end of the day the people who did this can go to jail and have their families visit them, touch them. They still have that, they still have life – for us it has been taken away.

“If you take a life, your life should be taken also.

“These people didn’t have to stab Breanna, but it’s clear their intentions were to hurt or kill her.

“I do think they are savages: they are heartless,” Mackey’s grieving sister said.

“These murders have to stop. My sister’s life was taken senselessly.”

Mackey’s family has met their MP Glenys Hanna Martin, who offered her condolences, but has heard nothing from any other politician, FNM or PLP.

Since the murder, police have taken five women and two men into custody for questioning.

Senseless death committed by senseless people.It’s high time The Bahamian Govt start executing these offenders. Gone are the days when society feared the police, incarceration & Capitol punishment !!! When will enough be enough????? Vigilantism is just around the corner!!! May God Help Us!!!!!!!!

Hang them! All that were involved. The driver too. Hang them time to send a message. Time for our cops to start shooting these scumbags on site. We are in a war. Time to act like it...

Stab them first though before you pop their necks!

What is going on in The Bahamas??? Male gangs shooting each other, revenge shootings and now girl gang stabbing...all over a stupid CELL PHONE!!

The time has come for the government to make these perpetrators responsible for their actions. I'm not sure hanging is the best solution but these people need to know that for every action there is a reaction.

Your government's have been corrupt for how many years now? The unemployment rate is horrendous. The teachers are inadequate, the churches are equally as corrupt as the government and don't preach the bible...only their conservative interpretation of it and family is non-existent! The country is in one he'll of a mess!!!

It's time this country realize how far backward it has gone over the last 20 years, for its people and for tourists who visit!

there is a whole generation of boys and girls let down by their own families and the education system. how hard is it to sit down, do your homework, and treat people with kindness people? newsflash! there is no one else looking out for you. if you were expecting your crooked politicians to help you out, they are done lining their own pockets and taking care of their kids with the best jobs and fat contracts...

Homework dont pay the bills that's why. You can't do homework when you're hungry. You cant do homework if your parents don't have a job to get you school supplies. you cant do your homework because even though you'll get a high school dilploma you might be lucky enough to get a job cleaning rooms at Atlantis

so sincere!!! but don't be so gloom athlete, it only glorifies the drug dealers and numbers people! i know not many make it but it's worth explaining to your kids that doing homework does more than pay bills in the long term!

If I believed this kind of sentiment and not what my mother told me to go to Nassau to get an education, I would be like those who resort to crime and violence to solve their problems. I was fortunate enough to pass the Common Entrance Exam but less fortunate in that I lived with my grandmother Elyn I lived in Nassau 1973 in some of the most pitiable places. We were not faced with such menacing monsters as maniacal materialism but we were challenged. Elyn lived first next to Deaveaux’s Club on East Street next to Blood Alley. The name was no misnomer as almost every weekend someone suffer the loss of blood. While guns were not a form of weapon and death was not the intention of some, persons suffered because of the environment.The other house we lived in was a bit better. A few small problems: a two foot diameter hole in the front room (covered it with a rug my cousin Lillian gave), backdoor fell off a few times, Elyn was also not evicted. Homework may not have directly paid the bills because I did my homework we managed. We never received full pay for the strawwork we did for Ms. Thurston. Subsistence allowance was $100. My mother sent mail by the Noel Roberts. Sometimes there was nothing. We relied on God’s grace. Elyn would sit and wait…on God who would always provide. I went to St. John’s College many days with tea and bread as breakfast and 25 cents for lunch. 25 cents would give you 10 mints. When I was fortunate I would have jam and bread and buy a soda. Sundays, herring in the can would be dinner. We accepted handouts and charity. The Salvation Army supported us during the Christmas with the Old Age Pension. I wore shirts for one day and pants at least two. Shirts would be hand washed after every use since we never had electricity. I was always fortunate to have at least two shirts and two pants. I did my homework by the kerosene oil lamp or before sun down as well to take advantage of the natural light. I must say that the lack of so many things made me more resilient and resourceful. It also made me aware of my situation and determine to change it. So when the opportunity came to take the test for BORCO, I passed and was accepted. That was not luck! It was by God’s grace but I had to put in the effort in five years at St. John’s College studying and making sure I did my homework. Elyn could read and write but I was basically on my own with school and my education. She took for granted that I was doing what I was supposed to do. I did for the most part. I did my homework. I still have my report cards from my years at St. John’s College and some of the comments are interesting. I know I have a purpose. We all do. Part of the purpose is despite your circumstance doing your homework helps and is an integral part of the end result of where you can be or hope to be. You environment does affect you but it does not make you who you are that was done before you were born. You just have to live it!

We are all savages on all fronts of our Bahama land. Drug bust from foreign forces. dump burning shanty town burnings infighting fnm vs plp, Haitians, vs Bahamians, neighbor killing neighbor spousal rape Corrupt leaders no education no healthcare no jobs no wealth etc,etc 'Proud to be a Bahamian'

Nice bunch of headlines today: the dump is burning, the shanty towns are burning, police raid gun trafficking gangs, police shoot a blind man and girl gangs murder at will.

We try to prove every day that IT'S BETTER IN THE BAHAMAS.

ikr!!! how horrible do you have to be to mess up a country of 300 thousand this much? !

It's not what the advertisements show.