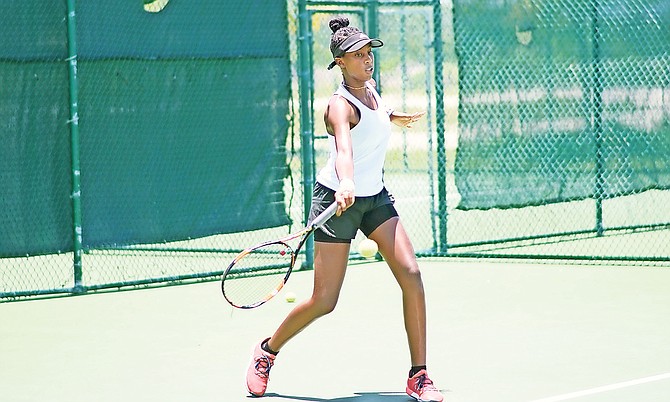 Abigail Simms, of the Bahamas, in action against American Victoria Lushnikov, of the US. She won 6-4, 6-2 to advance out of the first round yesterday at the National Tennis Centre. Photo: Shawn Hanna/Tribune Staff

Two players, including one of the two Simms sisters from Grand Bahama and No.8 seed Donte Armbrister, advanced out of the first round of the Junkanoo Bowl junior tennis tournament yesterday.

In the week-long International Tennis Federation touring event for players in the 18-and-under and 14-and-under divisions at the National Tennis Centre, Abigail Simms won 6-4, 6-2 over American Victoria Lushnikov.

But her little sister, 15-year-old Gabrielle Simms, was unsuccessful in her match right behind her on the same court, losing 6-2, 6-1 to American Kayla Dean.

In the first set, Simms got a break to go up 5-4 and held on serve for the win. She came back in the second set and got another break for a 5-2 lead and held serve again for the game, set and match.

"It's a great feeling to win. It shows that hard work actually pays off," Simms said. "I want to win. But I know it's going to be tough. There are a lot of great players here. I just need to play like I did today."

In his match as the No.8 seed, 16-year-old Armbrister took care of Australia's Charles Dossetter in identical scores of 6-2, 6-2.

"The match was great. It's always great to play against the home crowd," said Armbrister, who came away with his first international victory in the tournament. "So it was great to get the match under my belt."

After getting off to a shaky start, Armbrister got into his groove and controlled the tempo of the match.

At 2-1, Armbrister got his first break for a 3-1 lead and he extended it to 5-1 with another break before holding for the win.

It was pretty much the same in the second set as he opened with a 2-1 lead and pushed it to 4-2 and held and broke for the game, set and match. "I'm just looking to do my best, hopefully to win the tournament," he said. "It's always good to try to get a Bahamian to win one in their own backyard, so I will see what I can do. I don't think too much about the seed or ranking. I just go out there and try and concentrate on my game and do my best and hopefully I can come out with the win."

"My match was okay, but I felt I could have put more balls in play," Gibson said. "I just have to learn how to move the ball better because they move a lot."

Not only did she move a lot, but Niroshan said her objective was to get off the court as quickly as she could, considering how hot the temperature was. "It's really nice. I like the weather. It's hotter than at home," stressed the 14-year-old. "I just went out and stuck to my plans. I want to make sure that I put into effect the things that I learned in practice."

There was one upset so far with American Roddick eliminating boys' No.2 seed Max Hartenstein in a marathon 6-7 (4), 7-5, 6-0 decision.

On the girls' side, No.8 seed American Rachel Gailis won 6-1, 6-2 over Gabriela Singer and Aruba's Kayla Solagnier won 6-1, 6-0 over American Peyton Lynn Anderson.