Path Open For Medicinal Marijuana Use 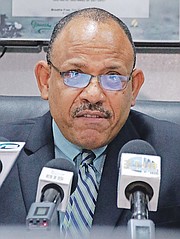 AS the government moves to consider an end to marijuana prohibition across CARICOM member states, legal pathways already exist for medicinal and scientific use in the country.

Minister of Health Dr Duane Sands, who has responsibility for dangerous drugs and poisons, confirmed to The Tribune the Dangerous Drugs Act provides an opportunity to request imports for a specific purpose.

However, he noted access was not so clear cut.

Dr Sands said: "People can (apply). Dentists can use cocaine for certain indications, they don't use it as much as they used to but they can. Opiates, other mind-altering drugs, are all available but in terms of mass availability it's not generally available like that so any available doctor can prescribe it. It's not something any doctor can up and prescribe - I mean they could but it would generate a flag.

"The Dangerous Drugs Act allows physicians to prescribe a number of mind-altering substances," Dr Sands said, "that does not mean other drugs are generally available in the Bahamas. There has been no policy change to make it readily and easily available, that doesn't mean there is not a tremendous amount of interest or speculation. But as I've said repeatedly, we're going to be guided by the regional experts' review and analysis."

Prime Minister Dr Hubert Minnis arrived in Jamaica earlier this week for the regional body's 39th conference, where talks over regional decriminalisation will be aired alongside other issues affecting the region like BREXIT, and disaster management.

The Regional Marijuana Commission (RMC) is expected to present its report on the social, economic, health and legal issues surrounding marijuana use in the Caribbean.

On Tuesday, acting Chief Medical Officer Dr Pearl McMillan said the ministry's records do not indicate that an application to the Dangerous Drugs Act for "Indian hemp" has ever been made.

It is classified in part II of the act alongside coca leaves, crude cocaine, and raw opium.

The Act defines "Indian hemp" as "all parts of any plant of the genus cannabis whether growing or not from which the resin has not been extracted; the resin extracted from a part of such plant; and every compound, manufacture, salt derivative, mixture or preparation of such plant or resin."

It further allows a "qualified person with special authority of the minister" to cultivate, trade in, import or bring into the Bahamas marijuana for medical or scientific purposes.

"It could be a number of things (why no application was made)," Dr McMillan said, "maybe they are not aware, maybe it's stigma. I think we'll have to monitor, awareness of the process may be why.

"Most people may think that it is illegal, or maybe they think they could get it easier illegally - the black market is there. There are any number of reasons why, certainly going forward it's becoming more topical people can become more aware of what they can do to get access it if they really need it."

Medical Association of the Bahamas President Dr Marcus Cooper told The Tribune there has not been widespread consultation with its membership on the subject of medical marijuana, but noted it is something he does plan to bring up.

When asked why physicians have not made an application for medical use, Dr Cooper pointed out that physicians can prescribe treatment but do not provide it.

"As far as I know none of the pharmacies actually have it," Dr Cooper said, "so physicians are not pharmacists. So if you don't have a practice that also has a pharmacy to apply, who would need to approve it."

Dr Cooper said he was familiar with the cannabis product Marinol, which he used to treat side effects in cancer patients during his tenure at the University of Miami's Sylvester Cancer Center.

Marinol is a synthetic or chemical form of THC, a naturally occurring component of Cannabis sativa commonly known as marijuana. It is FDA approved for chemotherapy-induced nausea and vomiting, and anorexia from AIDS or cancer.

"There are benefits of it," Dr Cooper added, "but we definitely need to approach the whole issue."

Former MAB President Sy Pierre gave his full support for the full decriminalisation of the plant.

"It's no good reason for it to be illegal," he said, "I think it should be decriminalised across the board. There is no scientific or medical reason.

"It's less dangerous than alcohol," Dr Pierre continued, "if aspirin would come out as a new drug today they would probably make that illegal but when you look at evidence for it there is no reason for it to be illegal. If you look at the American Medical Association they never said it should be illegal, they never had any qualms."

Dr Pierre said: "The medical literature and scientific literature is clear. There is nothing we can use that there are no ill-effects, if you abuse water it's going to be a problem.

"There are a multitude of benefits for using it. We have internal cannabinoids, it's a system of receptors for THC and CBD that are all over our bodies. There are immune aspects, seizures, chronic pain, and cancer."

Dr Pierre echoed Dr Cooper's considerations over why physicians have not utilised the Dangerous Drugs Act to prescribe medical cannabis.

"I can have a licence to write a prescription for (it) but where are they going to get it from?"

He said: "If someone is going to grow it for you, you need a permit to grow, harvest, sell, and if you purchase it you need a licence to import it. So I think it's time, who has the time, and it takes the knowledge."

Last week, the newly-elected Barbados Labour Party government confirmed it would press forward with plans to develop a local industry growing marijuana and other plants for medical purposes.

NO IMPORT! grow, harvest, sell LOCALLY IN THE BAHAMAS.

Bending in different directions likes winds does bush - seems be comrade minister's strength.
As of Thursday, July 20, 2017 Dr Duane had forcefully shot down any notion that the Minnis administration is considering the decriminalisation of marijuana or legalisation for 'medicinal or recreational' purposes.... Now, minister talkin out he Ass with the most ridiculous explanation anyone across entire world has ever heard come out man's mouth who gone school for medical training. {This one impossible make up }. And, let's not forget how the Doc also wants levy $700 Fee get release loved ones stiff body out PMH's Morgue.

A part of being a modern medical doctor is to match the symptoms of the patient with the drug that the pharmaceutical companies have designed to treat that set of symptoms. For each drug prescription that they write the get a kick-back from the company through the drug store. This is how doctors get to be so rich in private practice. Tens of thousands of patients die every year from overprescribed totally legal drugs. No one has ever died from smoking weed. Now you understand why most doctors do not want it de-criminalized? It would cut into their lucrative drug trade masquerading as a medical practice.

So medicine did not exist before pharmaceutical companies?

There are kickbacks for writing prescriptions? Really?

You know the cause of death of every person who has ever died?

The government is pushing ahead as fast as possible to join WTO although unable to present one iota of evidence that it benefits the country in any possible way.

Many countries have proven beyond any doubt that legalizing marijuana is a proven, leading-edge, boom industry, and Bahamians likewise have proven capable of its production. YET, the government refuses to jump on the bandwagon??

Where is the logic between the two?

Jackass is as jackass does!

When we ignore the titles of our political leaders and many leaders in our Bahamaland, when we see/search their business dealings and affiliations, many have a huge conflict of interest as it pertains to the legalization of cannabis. Many have stocks in businesses and industries that are in DIRECT and indirect competition with cannabis legalization; this includes people in very, very powerful and influential positions in our country and Government. As 'woke' citizens we need to call them out, we need to not support their business/industries, we need to call them out on their hypocrisy! This is not about some jobless thugs smoking some 'roachy joint' on the side of the road, our country is sick and our citizens are dying because of the same reason why cannabis was made illegal in the first place PREJUDICE and GREED! Not everyone has the disposable income to fly to Miami or seek expensive treatment even here in our Bahamaland. Even when one of their own former colleague (Phenton) took an absolutely brave stance by going public with his disease and spoke openly about Cannabis saving his life after many MEDICAL DOCTORS told him to go home and die, we still have our leaders spewing reefer madness rhetoric. This is very prideful and unfortunate. Genesis 1:30