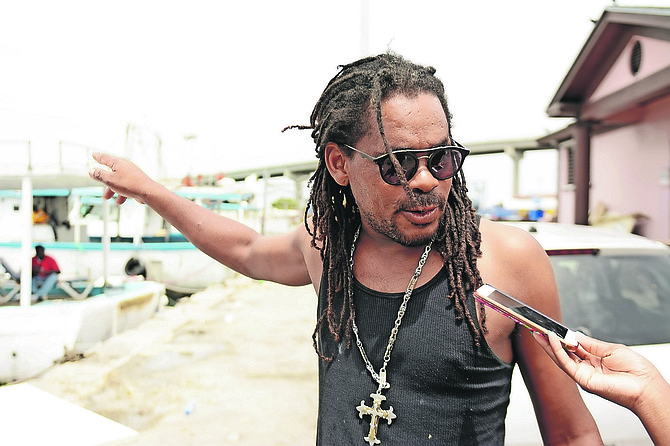 POTTER’S Cay Dock vendors are concerned about the potential impact cases of conch poisoning could have on their businesses.

Dr Sands said a “number of patients” would have eaten at Potter’s Cay. However, he added no advisories had been given out for the area and noted Department of Environmental Health teams would be deployed “throughout New Providence” to speak with vendors about the issue.

Bahamas Docks and Allied Venues Association (BDAVA) President Dwain Bastian was among the many who expressed concern yesterday about the impact of the reported illnesses on business.

“Yes, I’m concerned about it because…it could cost you, because people would not come to your business until they get the truth about the situation with the conch,” Mr Bastian said.

Many vendors also called for the specific stalls the afflicted persons ate from to be revealed, so business at the other stalls would not be impacted.

When asked if the conchs at Potter’s Cay would have to be tested, Dr Sands explained the issue is not with the meat itself.

“(Vibrio parahaemolyticus) is not an issue of the meat itself,” Dr Sands said on Wednesday.

“Vibrio is bacteria that ordinarily lives in seawater and is a part of the surface of the conch. The conch meat itself is not infected with vibrio parahaemolyticus…. We have learned historically that you can eliminate this problem by washing conch in fresh water.

“If you’re washing the conch with vibrio containing water, you’re not going to solve the problem. Even though the conch itself may appear clean on the surface. The way to get rid of the vibrio is to use fresh water.”

Aretha Bastian, BDAVA trustee, told The Tribune: “Anybody who is serving conch should always properly wash their hands and wash their conch in the fresh water.”

Arthur Johnson, a visiting vendor from Adelaide, explained: “You should wash them in fresh water. You supposed to keep them in salt water, and then when you serving it, wash it fresh water.”

However, one vendor, who wished to remain anonymous, adamantly stated that salt water is the only type of water that can properly clean conchs.

There also appeared to be a lack of awareness among the vendors about the exact cause of the recent illness.

Another vendor who wished to remain anonymous said: “Conch don’t poison people… You should have ask them what they eat earlier before they come here.”

Meanwhile, Mr Bastian criticised the effects of dredging works near Montagu beach on the quality of conchs at nearby Potter’s Cay Dock.

“What is happening right now, here in Nassau… the government allowing people to do some dredging,” he said.

“And what is happening, about three, four days ago, we had a lot mud (come) down through Potter’s Cay Dock, coming from the eastern side of Nassau, from round Montagu side. I know they’re doing some dredging down there.”

Mr Bastian said this has caused many conchs to be filled with “muck and mud”.

While he was clear he cleans his conch with fresh water, salt and lime, he pointed out that other people solely use salt water.

“And people who making conch salad or who doing conch handling (and) don’t have proper running water to wash the conch (are) using sea water, cleaning the conchs with (dirty) sea water.

“When the people cook the conch or eat the conch, they will be…consuming some of that same liquid from the conch juice.”

“We can’t put our conch in the water, because automatically it will be conch poisoning to people…because of the situation in the water,” she said.

We can’t put our conch in the water, because automatically it will be conch poisoning to people…because of the situation in the water,” she said.

.Even the old people use to tell you not to eat conch 'in da heat." They probably didn't know why but the did know that doing so would send you to the bathroom in an uncomfortable state. And yes there was the dredging going on at Montagu and the raw sewerage being released constantly in the waters at the various marinas around Potters Cay. Even on Paradise Island. And no toilets for persons hanging out on Potters Cay at night. So they relieve themselves In the same waters where some conch are stored overnight.

You cannot throw conch slop and fish guts in areas where there is stagnation of sea water DURING the hottest time of year and not expect bacteria to grow that could cause illness. These fishermen then store their live conch in the same area.

Quite foolish actually! Its a simple matter of a lack of understanding of the importance of maintaining certain hygienic standards!

Where is the department of public health in all this!!

Just close it down, quarantine the place, remove the filth and rebuild it east of the old bridge ...... Too congested, damp, dark and nasty under the old bridge

every single one of those stalls is nasty and they think that using the harbour water will actually clean something?? This is another classic example of our education ministers repeatedly failing our nation and generation after generation of dlumb asses.....if it smells like schit you shouldn't try use it to clean ya conch shite??

I never eat from under the bridge, it's disgusting and dirty. Wasn't there a rebuilding effort lead by V. Alfred Gray? I swear I recall Alfred Gray also declaring that several vendors were YEARS in arrears for their rent to the government. The rent was a measly $90 a year and those buggers weren't paying it!

Just don't eat it, unless you know it was cleaned properly. I probably wouldn't order it in a restaurant. I usually go to the docks to buy conch. I never did eat in touristy restaurants.

One ma comrade high school classmates who I am still in contact who was good at science who I also consider as my trusted science souce - is saying there's good at science stuff called tell me that the Conch poisoning outbreak can be traced Peeing in we Sea Waters.... and that we need pass law with $300 Fine if caught Peeing in Bahamaland's Sea Waters... Also claiming the closing Taino Beach in Grand Bahamaland - does results from swimmers Peeing... that we should consider levying on arrival a $10 Swimmers Pee Tax, payable by every Tourist and Visitor. .. and that repeat Peeing Offenders should be deported and placed on "Don't come back, you is too nasty" Stop List.

Ma Comrade JoeBlow, my friend says should also "No Farts". fine - however, that's a whole other story for another blogging day.

lol how you planning on taxing yee people peeing while sitting in the water :) Your source needs to brush up on their seawater vs bladder volume and possible parts per million urine vs harbor water :)

Listen, we have some slack standards across the board in this country. We have to do better! We have to be better. I can't even believe that there is such ignorance and confusion surrounding the handling of this popular food dish--and this is by the people who are serving it to the public. In the Bahamas we need to elevate our standard and implement regulations, not just with conch, but also airplanes, boats, and other vehicles.

Whatever happened with, never eat conch during a month with no "r" in it? That would imply not to eat it in the hottest months...May, June, July and August.

You charge a tax for peeing, no one will ever return. That's not the problem. Fish pee in the water. Silly 😜 conversation.

Ma Comrade Ashley14, first tourists Pee cause no one tells them it's against law Pee... then they Poops. Next thing you knows we natives coming down hepatitis to ear, nose, eye infections or worser— all from swimming in sea waters with high levels of Pea and Poop. Every scientific Marine Life Study points to that if Peeing is left unchallenged that Twenty percent Peerers will graduate Pooping - after just three Pees in sea waters... time outlaw the Peeing to nip the Poop ......stay in Butt.