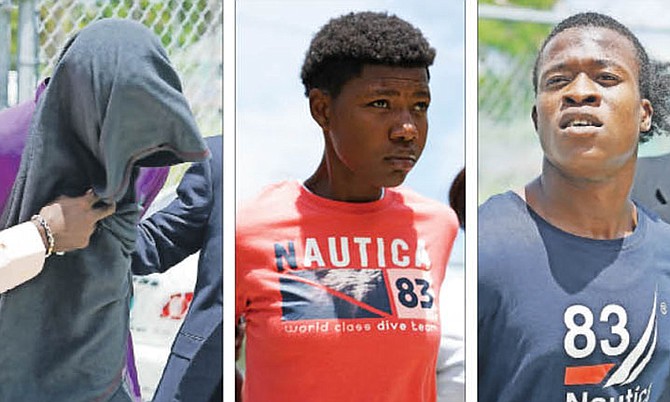 From left, a 16-year-old juvenile, Maquella Dean and Antonio Thompson, who are accused of murdering Sean Augustin on July 13 and attempting to murder Jason Campbell. Photos: Terrel W Carey/Tribune Staff

A WOMAN, a man and a 16-year-old were arraigned in a Magistrate's Court yesterday charged with murdering a man and attempting to kill another person last Friday.

Maquella Dean, Antonio Thompson and the juvenile all stood before Deputy Chief Magistrate Subusola Swain each charged with one count of murder and attempted murder stemming from the July 13 incident.

According to initial reports from police, shortly after 2am on July 13 a man was walking on the eastern side of the clinic on Baillou Hill Road when he saw another man being chased by a group of men.

That group subsequently shot both men before running away. Emergency Medical Services personnel were called to the scene and attempted to revive one of the injured victims, but were unsuccessful. He was pronounced dead at the scene.

The second victim was taken to hospital, treated for minor injuries and discharged.

Neither of the accused was required to enter a plea to the charge and the case was adjourned to October 18 for service of a voluntary bill of indictment (VBI).

They were all remanded into custody until that time. However, they have the right to apply to the Supreme Court for bail.

Meanwhile, a second person was charged in connection with the drive-by murder of another man nearly two weeks ago.

Keith Allen, 22, of Windsor Lane, was charged with a single count of murder stemming from the July 8 killing of Shanindore Neely.

His co-accused, Walter Johnson of Milton Street, was arraigned before Chief Magistrate Joyann Ferguson-Pratt on Monday.

According to initial reports, shortly before 3pm on July 8, a man was standing on Homestead Street when a Ford vehicle pulled up next to him. The occupants of the vehicle opened fire, hitting him in his body before speeding off.

The victim was taken to hospital where he was subsequently pronounced dead.

Allen was not required to enter a plea to the charge. The case was adjourned to October 18 for service of a VBI. He was remanded to the Bahamas Department of Correctional Services in the interim.

He also has the right to apply to the Supreme Court for bail.