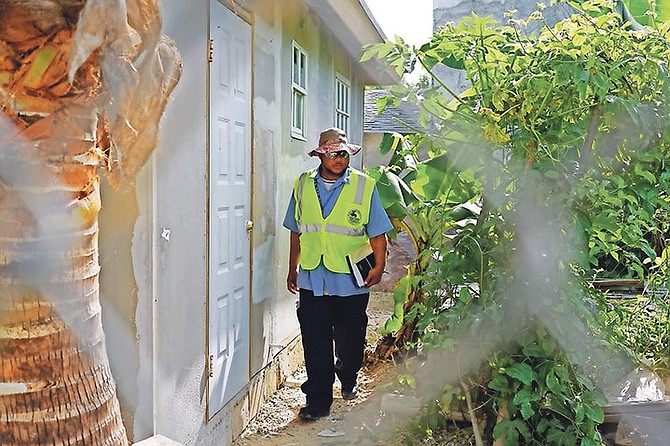 HUMAN rights attorney Fred Smith, QC, has asked Attorney General Carl Bethel and other government officials to agree in writing that they will not evict shanty town residents or bulldoze their homes until a looming class-action lawsuit is heard in court.

Mr Smith, in a letter sent to Prime Minister Dr Hubert Minnis, Mr Bethel and other government members, said “unless we receive suitable undertakings which we can lay before the court” his clients are prepared to apply for an urgent injunction to maintain the status quo pending a trial or order of the court.

The government has given shanty town residents in New Providence until August 10 to vacate their homes before the structures are bulldozed.

Several weeks ago, Mr Smith threatened a class-action suit against what he has called an “indiscriminate and arbitrary” push to “destroy the lives of thousands of legal” residents.

In his July 29 letter to the government, he said the policy to eradicate unregulated communities “is unconstitutional and infringes the guarantee against freedom from discrimination embodied” in the Constitution.

He said the Minnis administration’s plan to evict these residents next month, shut off their utilities and bulldoze their homes is unconstitutional for many reasons, including the fact the government has not proven, nor does it have, any immediate legal right to possession of the land.

He also claimed there is no provision of the Buildings Regulation Act that entitles the government to take possession of land. Mr Smith said by making the blanket decision to eradicate shanty towns, “the government has fettered its discretion, failed to consult and failed to consider the individual circumstances of particular buildings and occupiers,” adding the government is denying the legitimate expectation of the residents in question to occupy the land and to be consulted in advance of any proposed eviction.

He said he intends to file an action in the Supreme Court on behalf of his clients as soon as possible.

“At the same time, unless we receive suitable undertakings which we can lay before the court, our clients will apply for an urgent injunction for the purpose of maintaining the status quo pending trial or until further order of the court,” Mr Smith wrote.

He then asked the attorney general and each utility company or service provider involved to state in writing that until the matter is brought before the Supreme Court, the government will not seek to possess any land constituting a shanty town “other than by due process of law through the courts”; demolish any of these structures; disconnect any utility supplies “other than pursuant to governing statutory law”; or interfere “with the quiet enjoyment of the home and property of any person living in such an unregulated community.”

Earlier this month, Mr Smith – partner at Callenders & Co – said there were around 50 families who had come together to launch legal action in a bid to block the evictions. Since then, The Tribune has been told this number has grown considerably.

In the wake of Mr Smith’s legal threat, Mr Bethel has cast doubt on its success while suggesting to reporters last week the government was more concerned about curing the country of these substandard living conditions.

“The courts are there and if anybody has a right to take an issue to court they are welcome to do so,” Mr Bethel said last week.

“Now someone who claims that they have been squatting on someone else’s land for a period of time, if they meet the criteria and of course are able to go to court and have whatever right to continued occupancy that they wish to assert, defended or upheld by the court.

“We’re not going to try and adjudicate individual people’s rights, that’s their right to do for themselves. Our job is to clean up the environment to ensure that wherever there is building, just like with every other person in this country, is building according to code with appropriate permissions from appropriate technical officers in the Ministry of Public Works and in conformity with the building code, that conditions in every community are to the best of our able ability to ensure it is sanitary and that proper standards are maintained. That’s what we are doing,” Mr Bethel said.

Earlier this month, the government delayed its July 31 deadline for shantytown evictions until August, to ensure that it covered “all legal grounds,” according to Labour Minister Dion Foulkes.

Mr Foulkes, head of the Shanty Town Action Task Force, has also said all the properties being used for unregulated communities, with the exception of one, is constituted as Crown land leased by the government to Bahamians for the purpose of farming.

Give them an inch...

...and they will take the whole country.

NO! NO! NO! BAHAMAS HAS RIGHTS TOO!

“At the same time, unless we receive suitable undertakings which we can lay before the court, our clients will apply for an urgent injunction for the purpose of maintaining the status quo pending trial or until further order of the court,” Mr Smith wrote.

Meanwhile, happenings at Fox Hill continue to be ignored. Poor Bahamians, yall ain't gots no ombudsman neither no free attorney.

"... fact the government has not proven, nor does it have, any immediate legal right to possession of the land." Surely if the land in question is crown land it is a mater of public. Do Smith's people have any proof of legal right to the land?

Them towns will go! Remember the Rony Jean case. . .Government made a deal with him and then found he went and "broke" the deal by bringing Mr. Jean back. . .BEFORE THE COURT MADE A RULING!! This lawyer is one big mess. . .

My thoughts exactly! He played dirty in the Rony case and they need to do the same.

Bulldoze them and worry about his aZZ later!

Correct licks2, and the other thing is why is he always referred to as a human rights attorney when he only seems to raise his head when Haitian "rights" appear to be threatened? Should he be called a "Haitian Rights Attorney"? Just asking.

The Haitians seem to be the only foreigners (illegal or not) that seem to be treated with such disdain when it comes to their human rights. I seldom see other nationalities being mistreated. I have seen them all, Dominicans, Cubans, Jamaicans, Turks and Caicos Islanders, Nigerians, all illegal, and working. Some of them even have their own businesses. Go figure!

It's about the number of them. None of the other nationalities you mention constitute an invasive threat to our country....yet.

Generally speaking, I does suspect the learned monarch's appointed Comrade King's Counsel" might have another legal mauve under he horse's colonial area wig. If you have been occupying lands that you do not own, rent or otherwise have permission to use in excess so many years in private land or in the case of Crown lands without any certifiably objection from the registered private owner /government,, shouldn't you be able claim what is known as “squatters adverse possession?"

CatIslandBoy....don't have to "go figure". Yes other nationalities come here and work illegally and are not "treated with such disdain".

The reason is that the hate is not based upon them working illegally. The Haitians are hated because they come here and engage in a breeding war. It is clear their goal is to outbreed us and take over our country under the mantra of majority rule.

Jamaicans, Dominicans and T.I. people don't come here to take over. That's why we cool with them.

Building without permission is clearly illegal....building on land you do not own is clearly illegal....Bahamians .... who dont follow once procedures followed....gets punished.......building on w Bay st gets chopped in half...school built illegally offShirlley st gets construction removed.....building wid garage on odder property on Prince Charles gets garzge chopped off....church on real rstate people land off Saunders gets bulldozed....we talkin Bahamian here...!!., APART FROM DESE ILLEGAL SHANTY TOWN CONSTRUCTION BEING A DEATH TRAP TO OCCUPIERS AND SURROUNDING AREAS....IT IS INHUMAN TO HAVE DEM OCCUPIED.....The solution is simple......Put dere Shantytown residents to live with the govt people houses who allowed dese illegal buildings to be built....let dem live wod the govt offocials who illegslly hooked up dere water supply..illegal.electrical supply.......put the shantytown occupants to live in der houses with all the govt officials who did not do dere jobs and stopped illegal construction....saw what what was happening but did not do da jobs.. taxpayers paying dere salaries to do......puts the shanty towm residents to live in da houses of da same people who hires dem who pays dere work permits cheap wages knowing dese pore Haitians are forced to live in subhuman conditions.......REGULAR PORE STRUGGLING BAHAMIANS ARE FED UP HAVING TO FOLLOW DA LAWS AN SEE SLACKNESS CONTINUE AND PUNISHED WID TAXES TO PAY FER SLACKNESS,!!!!!L..NOT A DAY LIKE DIS...,!!!!......ORDINARY REGULAR PORE BAHAMIANS WANTS TO SEE DA AUTHORITIES START PROTECTIN WITH STEADFAST DETERMINATION OUR NATIONAL INTERESTS..,!!!!.,.,MAKE WE BAHAMAS BETTER AGAIN...,!!.,.,.,.,

Nice try Fred Smith. The jig is up! It’s time to head out - GET OUT OF THE COUNTRY, NOW!!!

Halt what. When I was building my house in Eleuthera, the inspector told me that if I laid another block without a permit that he would arrest me. I stopped immediately and went and paid for and got all necessary permits. so if I (25th generation Bahamian) had to do it the right way, then we all have to do it the right way.

Haitians are human beings just like the rest of us. If the government was acting properly, the construction of these homes should have been stopped when it first started, but it was not. The government watched from the sidelines for years and years and did nothing. By their inaction, they now have a situation caused by their very own lack of attention to what they should have been managing from the beginning. It is now way too late to evict these poor innocents from their homes. Not only that, but it is immoral, illegal and quite honestly disgusting. Evict humans from their homes, bulldoze the structures and throw them onto the streets with no plan to take care of them once you treat them like trash is not how a modern society should operate. The Bahamas best think twice about treating people this way because the world is watching. That others the way you would want to be treated yourself !

Bahamians add front rooms, side rooms, extensions, swimming pools without permits, inspections, but gripe about shanty towns existence. Half of our Government building resemble shantytowns. Our problem is and will always be enforcement. I find it ironic we have ignored most of the laws on the books, (save those which the government use to keep us controlled) but write new laws to overcome obvious failures of enforcement. All we can see is the "Horrors of the Haitian take over" but remain blind to the garbage all around us, the corruption all around us, how we treat our own children, our own elderly. For a people bestowed with such luck, location, self determination and potential to even have shanty towns in our midst is a direct reflection on us. We, with our paranoias and prejudices created the shanty towns.

The shanty towns are allowed because Bahamians are the mastermind behind them. They are for the most part the benefactors of what is called an horror.