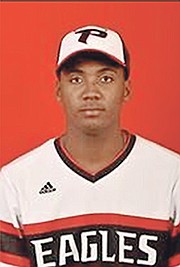 FOR the second consecutive year, a pitcher was added to the list of Bahamian baseball talent selected in the Major League Baseball Draft.

Chavez Fernander was selected by the Detroit Tigers organisation yesterday, in the 35th round with the 1,035th overall pick.

Fernander, a Grand Bahama native, recently completed his sophomore season with the Polk Community College Eagles in the NJCAA.

He was also the second Bahamian pitcher selected from the Eagles roster in as many years after the Colorado Rockies selected Shemiko Smith last year.

Smith made his debut on January 26 to lead the Eagles to a 7-6 win over Lake-Sumter State College.

He posted a season-high seven strikeouts on two occasions. The first was on February 21 in a 5-2 win over Webber International JV and again in a 16-0 win over Florida Southern College JV on February 28.

His longest appearance of the season was April 11 against St Petersburg College when he recorded five strikeouts and pitched seven scoreless innings in a 10-0 win.

Fernander's wins were ranked sixth in the conference and he previously committed to join the Novas Southeastern Sharks following his stint with Polk State.

After winning four consecutive Suncoast Conference championships, the Eagles (29-23) finished third this season with a 16-14 record in conference play.