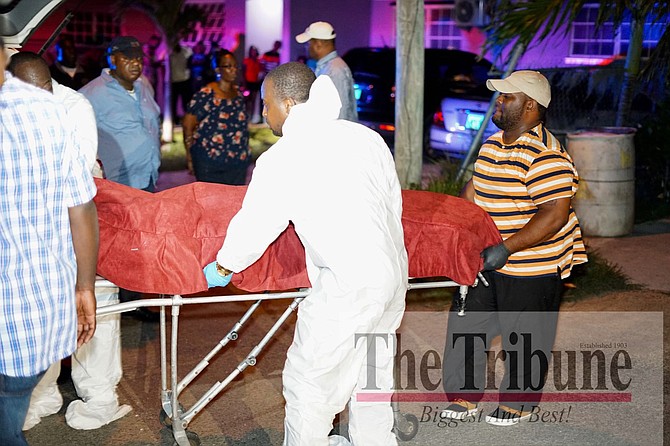 The body of the victim is removed from Hollywood Subdivision. Photo: Terrel W Carey

THIS STORY HAS BEEN UPDATED HERE

Scene of homicide in Hollywood Subdivision

According to reports, shortly before 10pm, the man had arrived at his home with his children in Refuge Court, Hollywood Subdivision, off Cowpen Road, when a car pulled up behind him. An armed man got out and demanded cash - possibly searching the victim - before shooting him and driving off.

The victim died at the scene.

This latest murder came hours after two men were killed in a shooting at a barbershop.

At one point the public was being assured that they were generally safe and most of the murders in New Providence was just bad boys killing each other. Drug boys shooting one another in turf wars and gangs killing rival gang members. But over the past few months, especially, it has become more than that. More armed robberies where victims were shot and killed, Others were victims by being near to where shootings took place and yet others only happened to be related to some who was notorious or involved in a gang. Regardless the situation has now everyone to becoming a potential victim of a shooting. Even in their own home or while at some business establishment . No ground is sacred anymore. And obviously it will take more than the work of the police to stop this spiraling situation that is already out of control. There must be intervention before young men swear loyalty to gangs. And usually when armed robbers are caught and taken before the courts they are dressed from head to toe in brand name clothing. Taking innocent lives for materilalism. These are the ones on whom the death penalty should be enforced. Along with those who carry out cold blooded executions.

You are late, John. No one was assured or assumed they were safe. While many murders are gang related, there are also armed robberies that result in murders. Nothing new; been going on for decades. That is why houses have bars on their windows and houses have alarms.

Just wait until 12% VAT causes more business closures increasing unemployment and further slowing the economy. This is the tip of an iceberg. People cannot be expected to "live on nothing". We will have more robberies and murder to contend with.

If the government had an ounce of sense, they would follow Canada and other countries and legalize cannabis as a way of immediately adding meaningful stimulus to the economy, simultaneously putting an end to these drug-related turf war murders which are escalating as the economy continues to falter.

They've offered no other alternatives, and are too self-righteous to do the one obvious thing that would be a saving grace.

Stupid does as stupid is!

We had crime long before we had VAT so that is not the reason we have crime. However, if people keep talking that an increase in VAT will lead to more crime it will only give petty criminals an excuse to justify their actions.

Our legal system needs to stop pandering to old white gray haired British farts on the other side of the planet and deal with justice here as WE deem fit to bring this situation under control. If criminals have no fear of our laws and punishments then what incentive would they have to stop because they know the most they will suffer is a spank on the hand and told don't do it again !!!

Strawbahamian, you demonstrate a commonly held but dangerous belief that The Privy Council in the UK is not an extremely important weapon in the ongoing fight to maintain a functional democracy in this country. The Russian government employs hundreds of workers whose sole job is to destroy democratic institutions around the free world. You are doing your part to assist them while also demonstrating your racism, why else mention what you think is the skin colour of the members of this highest court of appeal. You are wrong with that assertion as well, by the way. Is your stupidity and ignorance deliberate or not?

The privy council will not stop us from executing someone as long as that meets our list of what is the worst of the worse. Successive Governments have not said what this is so they are unable to execute. In reality our Governments (both parties) do not want the headaches of having an execution and find it easier to have the public blame the privy council, rather then the Government who is at fault.

I really don't see The Bahamas pandering to the "old British farts", Our Government has a history of ignoring Privy Council rulings! No, the problem is here and here alone. It is not hard to lose the plot, regaining it neigh impossible. We wanted independence without the responsibility, and we have lead our youth by example. We have on our hands exactly what we have acted to produce.

Grand Bahamas should be a legal Marijuana zone. Only Grand Bahama. That would get its economy jump-started.