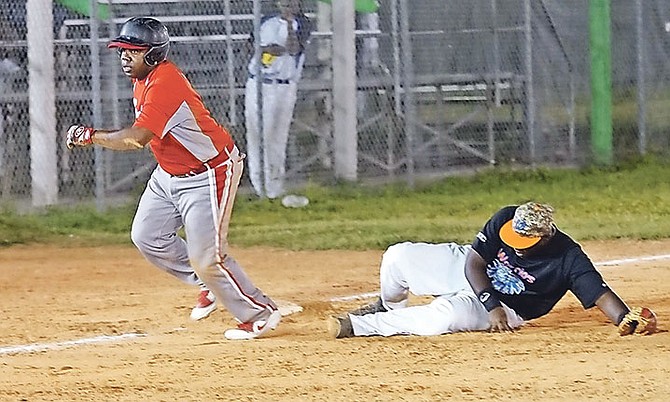 LAMAR Watkins scored the tying run and D'Juan Seymour got the winning run in the seventh inning as the Commando Security Truckers came from behind to nip the BTC Elite Warriors 12-11 as the New Providence Softball Association continued its regular season in the Banker's Field at the Baillou Hills Sporting Complex on Saturday night.

Watkins led off the inning with a double, moved to third on a wild pitch that got Seymour on base. After Philip Rolle singled to place the two runners in scoring position, Watkins and Seymour came home on an error that allowed Watson to reach safely at first. Watson was left stranded on second as Garfield Bethel struck out, but the damage had already been done.

The Truckers scored three runs in the second, third and sixth inning before they pulled it off in the seventh.

BTC led off with three runs in the first, two in the second, four in the fourth and two in the fifth. But when it counted the most, they got shut out in the sixth and seventh innings.

Sherman Ferguson just missed the cycle with a double, triple and home run in his 3-for-3 plate appearance, driving in three runs and scoring as many times. Jordan Gibson was 2-for-3 with a RBI and two runs scored and Navardo Gilbert was 2-for-4 with a run scored.

Alex Clarke got the win on the mound and Jeffery Woodside was tagged with the loss.

The NPSA returns to action with the following games this week: