Smith to launch judicial review over Oban heads of agreement 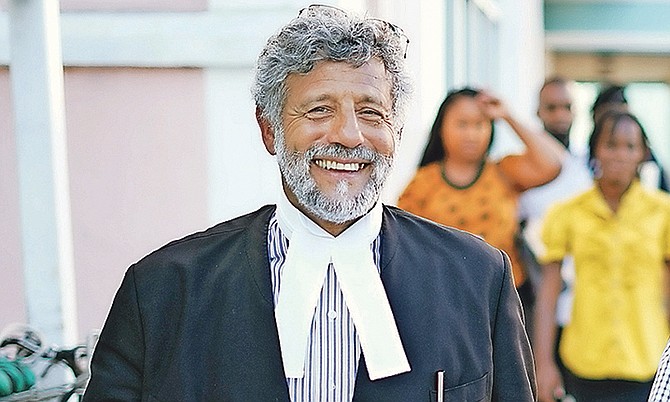 FRED Smith, QC, attacked the government yesterday for a deal prohibiting it from terminating the heads of agreement with Oban Energies whatever an environment impact assessment may find, insisting he will launch judicial review proceedings within weeks to challenge the legality of the provision.

He said “dozens” of Grand Bahama residents have asked him to do so.

A persistent critic of administrations that push developments before consultation and environment assessments are completed, he said this is the first heads of agreement he has seen that features this provision.

Perhaps to mitigate the provision’s effects, the heads of agreement empowers the minister responsible for the environment to halt use of any equipment that causes environmental infractions. But Mr Smith said this is useless without environmental laws that give the minister such enforcement power.

He added: “This heads of agreement and this particular clause makes a mockery of the rule of law. It undermines all of the statutory bodies in which Parliament has reposed the obligation to receive applications under the Building Controls Act, the Planning and Subdivisions Act, the Port Authorities Act, and the Conservation and Protection of the Physical Landscape Act. It means that all of those regulatory bodies which have been created by Parliament to provide an organised code of regulated development have been illegally stripped by the dictatorship of the Office of the Prime Minister from being able to properly perform their statutory functions.

“Given this heads of agreement, can anyone honestly believe that the director of physical planning under the Subdivisions Act or the building controls officer or the BEST Commission or any functionary in the galaxy of our regularity agencies will be able to control Oban, the developer?

“I can confirm that I have instructions from residents of Grand Bahama to launch a judicial review to set aside the heads of agreement as an illegal agreement because it is entered completely outside the laws passed by Parliament and there has been no consultation with the people who will be most affected.”

Grand Bahama has been in dire need of investments. The $5.5 billion oil storage and refinery project would employ up to 600 people directly during construction and 250 people when completed, the heads of agreement said.

Gowon Bowe, president of the Bahamas Institute of Chartered Accountants, acknowledged the need to jolt Grand Bahama’s economy yesterday but suggested the no-termination over the EIA clause goes too far.

“The country is not at a point where any and everything should be accepted,” he said. “It still has a tremendous amount of natural potential in so many areas. While a major island, Grand Bahama should not be sacrificed simply to provide short-term benefit when there is a need for a clear assessment and a longer-term plans.

“Going back to the National Development Plan when we try to turn economic fortunes around, we have to be clear what we are going to leverage from each island. If we believe Grand Bahama has prospects for major tourist projects in locations where there are tourist attractions now, then we have to be careful not to disrupt that. While there is anxiety to get the economy jumpstarted, we can’t sacrifice long-term prosperity for short-term gains.”

Mr Bowe said the heads of agreement tabled last week did not answer key questions about the project and he reiterated his view that professionals at the Bahamas Investment Authority should explain their due diligence efforts and the mitigation factors they considered before recommending the project to stakeholders.

“There is still no clarity on who the principal investors are and where the finances for the project are going to come from,” Mr Bowe said.

In contract law, a mistake is an erroneous belief, at contracting, that certain facts are true. It can be argued as a defense, and if raised successfully can lead to the agreement in question being found void ab initio or voidable, or alternatively an equitable remedy may be provided by the courts.

Based on what was presented thus far to the public, Minnis should halt this contract pending further investigation. Minnis definitely did not know what he was signing and, the public still does not know who he was signing with. And if the signatures are are forged or even irregular, that is more grounds for Minnis to divorce himself from this marriage. What government gives a high polluting industry, like an oil refinery, tax free status in any event? If ANYTHING THEY ARE TAXED MORE, based on the safety risk they pose and the potential to pollute and the waste they will generate.

The QC is on a war path.

Gowan Bowe is right, and QC Smith is rightfully having great fun making our feckless PM look like the fool that he's proving himself to be. Minnis lends new meaning to the word "dumb"!

This man is trying to destabilize our country, which is already not too stable.Why doesn't he go to Haiti to help Haitians? He needs to be gone.

I was thinking the same thing. Like Mitchell said, Smith is a mischief maker.

stillwaters, "Our country" has been destabilized since the day we were born. Fred Smith appears to be one of the very few people in this country fighting for the little man. I can only imagine what, without the handful of people like Fred Smith, what this country would really be like. We are 10 steps behind the rest of the world on moral issues, despite the fact that nearly 99% of the population are hard core Christians. We are 10 steps behind the rest of the world in education and critical thinking despite having enough money to educate all. Criticize Mr. Smith all you want, but my reading of the news suggests that the stupid shite that passes for normal here needs to be checked by someone with an ounce of reasoning. Most of the time it seems as if Mr. Smith is the only one who defends human decency and who takes any risks in standing up to in an otherwise backwards mentality in this country. Consider how a group called the Christian Council has moved The Bahamas, forward or backwards? I do not know Fred Smith, but I appreciate the causes he takes on, as a human being.

First time I'm in agreement with the QC!

Maybe they should just shut it down and send OBAN home, that should make a lot of people happy, I'm still reminded of the shady pass of Wallace Groves, one of the GB port authority and Freeport founder and the current owner of Bahamar, all shady, but like most bad people there are good in most of them... Shut OBAN down!!!