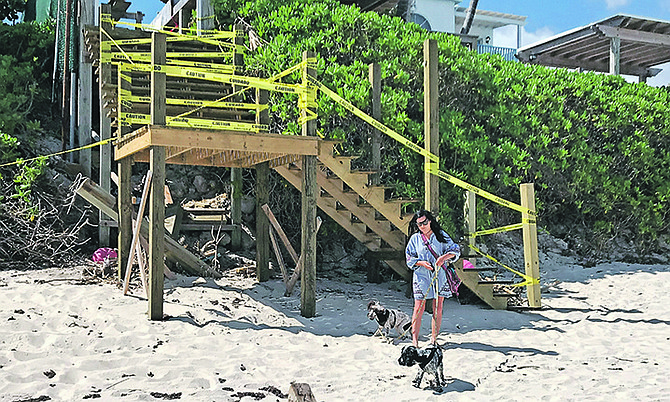 THE collapsed stairway which forced the “temporary closure” of a public access path to Cabbage Beach could reopen within the next two weeks, according to officials at Atlantis who yesterday said repairs are now 75 percent completed.

In an update on the repair schedule yesterday, Atlantis’ Senior Vice-President of Public Affairs Ed Fields told The Tribune that while original plans were delayed due to weather and design issues, he expects the pathway to be reopened in the coming weeks.

Mr Fields has maintained officials will keep the pathway closed until all the repairs are finished and inspected, insisting the resort wants to ensure the pathway is up to code.

In January, it was reported that a 50-year-old French tourist was badly hurt as he tried to get on to the beach when the steps collapsed beneath him, hurling him on to rocks seven feet below. His wife and children looked on helplessly as the man - unable to move - started being dragged into the ocean by the crashing waves.

He was later rescued and pulled to safety by employees from several surrounding properties.