Face To Face: Lessons Of Life Learned Around The Water Pump

Take a slow drive through any Over-the-Hill community and you will find a water pump. It’s a necessity in an area where there are still homes without infrastructure for running water. A well is a place where people come to connect and chat while drawing water, as it has been for thousands of years. In modern neighbourhoods, there is no well and without it, there is also a lost opportunity for people to get to know one another better on a daily basis. People stay indoors and have become more sedentary in lifestyle and less community-oriented in nature. But, those inner city pumps are the spring from which life lessons flow, according to Barbara Ann Perkins.

She is a well-respected professional in America and her name can be heard from the halls of Congress to the streets of Miami. Yet Barbara points to her days “toting water” from the pump on Lily of the Valley Corner as the days where some of her most important life-lessons were learnt. So impactful were these days that she authored the book: Sisters at the Well – Finding and Living Your Life Lessons. 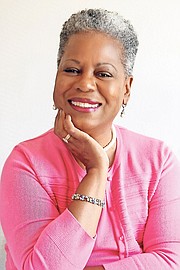 Barbara was born in Miami, Florida. Her grandfather, Cat Island native Samuel McKenzie, served in the military and on returning to the USA as an amputee, received his GI Bill for veterans. With that, he purchased a large family home and invited his daughters and their children to live with him. Barbara was the baby in the big family and thus, her grandfather became her caretaker. When she was six years old, her grandfather died.

His Bahamian family flew over to attend the funeral and among them was his beloved aunt, Kathleen Marshall, who was originally from Staniard Creek, Andros. Kathleen saw that her mother, Barbara Jane Parish, had her hands full trying to work and tend to four children. She offered to take little Barbara with her to the islands.

“I went from the big family house in Miami to a home in Nassau that was 600 square feet, had no running water and none of the facilities I was accustomed to – I felt like I was at camp,” said Barbara. 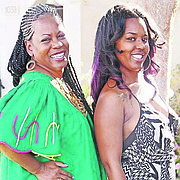 Barbara Perkins with her daughter, Kelsie.

Barbara learned so much about unity and togetherness from Bahamian women as she grew up Over-the-Hill. She can still recall washing clothes in the tin tub. Today, her children laugh at her when they see her washing small things by hand, but she appreciates the “foundational habits” she gained during her formative years spent living the island life.

“We were poor in resources but not in spirit,” she said.

“We were generous with each other and we gave to those who didn’t have. I learned how to be conscious and aware of the needs of others; how to check for people, knowing that whatever I deposit, there would be enough for me when it’s my time to withdraw.”

She first attended St Agnes Preparatory School but later moved to St John’s College after her godmother, Laurie Lee Gibson of Eleuthera, generously offered to great grandmother Kathleen to pay the tuition. She was baptised at Faith Temple Church of God and even though she was ten and she was being baptised among a group of babies, her godmother Laurie was proud.

In 1973, when Barbara was 16 years old, a traumatic incident would cause her to leave Nassau and return to Miami: “It was a very difficult transition because I was in Nassau for ten years.

Barbara then had to face feeling like a stranger in high school in America. She left St John’s in the fourth form and still had a year of high school left:

“They weren’t my friends… the people I grew up with. The culture was different. I was embraced most of the time (in both places) but always as ‘something different’ - so that was difficult. But because of my upbringing in The Bahamas, I learned how to be focused and I was well-prepared for adversities.”

By the time she returned to Miami, Barbara’s mother had another six children – ten altogether - and although she was overjoyed to be reunited with her nuclear family, she felt like a “lonely spade”. She would sometimes wonder why she had to be the one to leave the family and grow up in The Bahamas, but she says later on in life, she understood the “love and generosity” that was poured into her since she was a little girl. She knew her Aunt Kathleen was heartbroken when she left, and she felt a little guilty because of it. So, she made it a point to do her very best to make her aunt proud.

“I decided to make good and make her proud,” she told me.

“No one in our family had ever gone to college. I had no model ahead of me to follow. We were poor in the US and poor on the island – poor in resources. I knew it would make her proud if I did well, so I continued to work hard in school. I went to community college and that made her proud. Then I got a job in the bank, that made her proud. I then pursued my undergraduate degree in Boston, and it was everything she could hope for.”

Barbara made it through the first three years of university but because of the struggle, she ended up leaving to take a job with American Airlines as a flight attendant.

“She died my first year as a flight attendant in 1978,” said Barbara.

“I was 20 years old. She lived long enough to witness me still doing well.”

That job ended up being her longest. For 17 years, she served American Airlines with distinction and made a mark for which she is still recognised today. During her career, she got married to Stanley Perkins and they had two children together - Kelsey and Cody. They were living happily in Los Angeles when one day, a major earthquake rocked the area. On that very day, the Perkins’ decided Barbara should stay home and raise the children. As Kelsey and Cody got a little older, Barbara started a life-coaching practice.

She found a calling and a niche in helping American professionals to perform even better in business by sharing the values that made her who she was – an American who learned the value of hard work, humility, generosity and community spirit by being raised in The Bahamas. Today, that practice - Image Builders Etcetera - is 18 years in existence and has attracted a long list of high-profile women in America – women in Congress, CEOs, women in the medical field, banking field and so many others.

Barbara is also the founder of three non-profit organisations that are making a difference. The International Black Women’s Public Policy Institute (ibwppi.org) is led by a collective of inter-generational women leaders representing the interests of women in countries throughout the African Diaspora. She formed this organisation with the purpose of “connecting and advocating for black women globally through acts of kindness and public policy”.

She also envisioned the Los Angeles African American Women’s Public Policy Institute (laaawppi.org) with five other women, now in its 16th year. The non-profit serves as a “pipeline for women wishing to be in the public space – get elected to office, running a campaign, finance reform, and public policy”. LAAAWPPI has graduated 285 women through their annual leadership and political development training programme since its inception.

Her third non-profit, Sisters at the Well (sistersatthewell.com) was born out of her personal desire “to be in the company of inspiring women, committed to building upon the solid foundation of sisterhood left by generations of strong black women” adding that “the idea and name was taken directly from the Bible” and the life lessons her experience in The Bahamas provided.

When she returned to Nassau to bury Aunt Kathleen, Barbara thought she would never return to this country, because it didn’t feel like the friendly island she had always known. She allowed her godsister Ingrid to live in the house she grew up in, and she did so for many years. A few years ago, the house burned down and in some way, possibly the occurrence of yet another tragic incident, made her return.

Since returning, Barbara’s passion for the country has been rekindled. One of her first projects was to support the Lillian Coakley Library on Blue Hill Road. Ms Coakley, she said, taught her the love for reading. This past March, IBWPPI helped her to create a reading room in the library, and donated 500 books to the cause. She has also started a Boots on the Ground programme. Through her connection with firefighters and policemen, Barbara is now collecting water boots to send to The Bahamas. In the event of another hurricane, especially on the Family Islands, she said more people will be able to assist in the clean up and reconstruction efforts because they will be able to wade in the water more safely.

Meantime, back through Lily of the Valley Corner, Barbara has cleaned and fenced the property and is working to create a green space for the children of that community. She remembers that when she would visit her mother in Miami in the summer, she would pack boxes of clothing, shoes and other items to send for children in the community. I met her at the CEO Network Conference organised by Dr Deborah Bartlett, where Barbara gave such a passionate address that it led to this Face to Face interview.

“The Bahamas is where my soul lives,” she said, “And in particular, the island of Eleuthera.