Pm: I Won’T Be Forced On Chief Justice Job 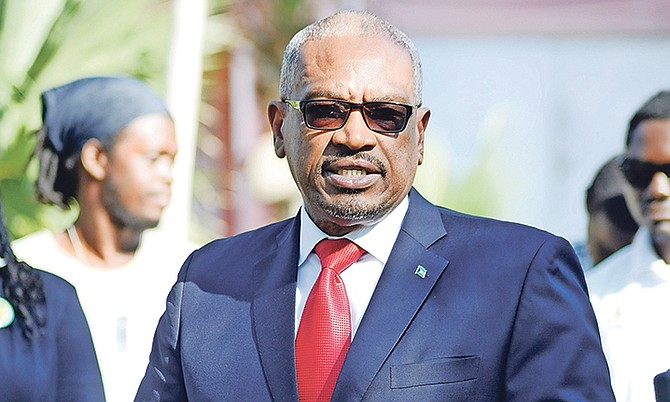 DESPITE facing fierce criticism over his failure to appoint a substantive chief justice, Prime Minister Dr Hubert Minnis said he would not be forced to fill the office.

While Dr Minnis did not say specifically whom he was referring to, Bahamas Bar Association President Kahlil Parker has castigated the prime minister over the issue in recent weeks.

While this appointment continues to be delayed, it has been speculated Attorney General Carl Bethel was being considered for the chief justice post.

However one official in the Minnis administration dismissed the notion he could be appointed.

Yesterday, Dr Minnis would not offer much insight into whether a pick could be made soon.

“Listen I have said what I want to say,” he said when The Tribune asked if there was a specific timeline. “I am finished with this subject. I have said all I want to say about the chief justice. Nobody is going to force me to do anything okay? Full stop.”

Last week, Mr Parker told The Nassau Guardian Dr Minnis has a “tremendous misapprehension” of the constitutional provisions relating to the appointment of a chief justice, adding the prime minister did not appear to grasp firmly the Constitution as a whole.

This came after Dr Minnis suggested the Constitution provided a certain timeframe for him to fill the post and claimed he was within that timeframe; however, The Tribune was unable to find such a clause.

He said he was not worried about losing political capital over this matter, adding his actions or lack thereof were supported by the Constitution.

Dr Minnis became defensive on the issue after repeated questioning by the media at a press briefing marking his return from England, asking reporters whether they would prefer he prioritised the matter over other national issues like a recent blackout threat by Bahamas Power and Light unions.

He suggested the Bahamas’ Constitution provided for a specific time frame on appointments for the post.

Dr Minnis said on April 22: “At this point in time I’m trying my best to improve the Bahamian economy, improve the quality of life for everybody, you just told me about BPL possibly turning off lights – that is more important to me, so those are matters I will tackle first.”

When asked if his statement implied he did not consider making a substantive appointment a priority, Dr Minnis replied: “Let me ask you a question, which is priority to you, your light going off or you getting a CJ, which one is more important to you?

He shrugged off one reporter’s attempts to raise concerns made by the legal fraternity, saying: “No, take that out of the question, you would prefer your light being off or me taking all resources and dealing with it, which is more important to you?’

When asked who was advising him on the CJ matter, Dr Minnis said last week: “I have the whole Attorney General’s Office, I have my Cabinet.”

Ma Comrades, there is something deeply wrong when a sitting prime minister is incapable keeping ya lights connected while preparing for filling a single vacancy as they arise. Let's see the diary of the frequency PM's meetups with the electricity people, and the minutes meetings held. It's called prime ministerial transparency... besides what's holdup appointing Comrade Brian Moree? Mind you, isn't this the same PM that appointed dead people government boards shortly after he was sworn in... makes you wonder how many the 91,409 voting red shirts on 10th May 2017 might have been stiffs still unclaimed at government's morgues? ( You just can't make up this stuff }.

In laymen terms : YALL CANT MAKE ME DO MY JOB!

I guess if his cabinet and his AG office is wrong. . .please tell us what and how it must be done! Please!

The Prime Minister is 100% correct on this issue.

Good one. You had me fooled at first but I finally got the sarcasm!

If Madame Comrade Her Excellency the Governor General does not want be seen as politically interfering to fire the prime minister - then at minimum she should demote the PM down to the lower work performance expectation pay grade premier..... which constitutionally calls elimination of a deputy - meaning KP has go.,

TalRussel do you ever post anything with common sense?

Many in our society now appreciate that it takes very little to get Minnis to flash his detestable gross arrogance. It's indeed a most serious character flaw!

This government is as transparent as mud...

How dare they question their lord and master?? " Its the peoples time"

I wonder what all the stink is about, when there was no Commissioner of Police there was an acting one, life went on for the force.. while there was a need to have a COP the acting commissioner worked just fine. There is an acting CJ, he has all the powers and privileges of a sitting one. The "Acting" rank works with every arm of the government. So in essence there is a CJ, the office of the CJ is till be carried out, he is just acting.

The now appointed Commander of the RBDF acted for more than 3 years, the PLP never confirmed him, it took a change in government to get him confirm. Ask Brave, he knows about it...that was an important post as well. These stuff happens all the time.

My problem isn't that there is someone acting in the role, my problem is with his attitude when answering pretty simple questions. Only an internal dictator would answer that way.

The problem is that when someone doesn't have security in their job they are likely to go out of their way to please the person holding the "Approved" stamp. I shouldn't say "likely", I should say "there's a possibility" and there's no room for that "possibility" in a fair and balanced justice system.

The position he takes is that of a typical micro manager. Was it not he who said he would take no portfolio so he could "oversee" all ministries?

Ma Comrades, has wonder if Acee writes material for the PM - or he comes up best zingers all by he prime ministerial self.

Sickened....no this time i was not being sarcastic. This issue is being blown out of proportion.

We have bigger problems at this moment even though the CJ issue is very important. Bear in mind that a new CJ will not reduce Vaseline consumption at HMP - so from a "value of human life" perspective it doesn't matter.

We had yet another demonstration of the devalued nature of human life this past weekend with 5 shootings.

Dope and cellphones are far more valuable than Vaseline at HMP ......... smt

No one is forcing the PM, but he has to understand the importance of prioritizing to maintain stability in the system he is the head of. All he has to do is seek recommendations from respected neutral parties, consider the best choice and make a decision that does not create a conflict between the different branches of government (like appointing a known FNM). Would not take more than several weeks tops. He is coming upon one year in office!

The bottom line, "fook the people's time, I am PM now!

What if we had an Acting PM for the past six months??????? ......... But Acting positions in the civil service is a common (and cheap) way out to cover key positions ........ and/or it is a political pressure tactic to force acting position holders to cow-tow to their superiors ....... it is found in middle management and senior management in every Department of Bahamian government.