Dog's Death After Illegal Caesarian 'A Case Of Animal Cruelty' 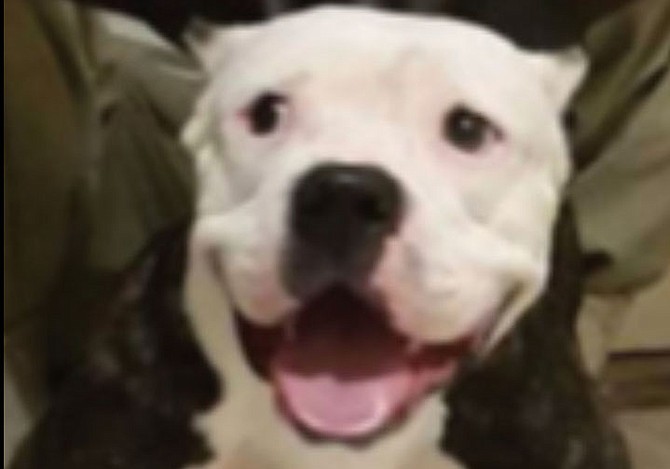 THE brutal death of a pregnant female pit bull terrier following an illegal caesarian performed by an unqualified “street vet” playing doctor was described as an “awful tragedy” by a local veterinarian in Grand Bahama who says the incident is a case of animal cruelty.

Dr Chante Wildgoose of Freeport Vet Hospital, who is familiar with the four-year-old dog named Whitehead, said she was butchered to death during a procedure that was allegedly performed without anaesthesia.

And now, she has learned that the eight surviving pups are dying because their mother is not around to nurse them.

“I was just told this (Friday) morning that the puppies are dying one by one. Of course, to hand feed a newborn requires hours of attention and to feed in excess of six puppies is a lot of work,” she said.

Dr Wildgoose said that the pups are going to die without proper nursing.

The story, with the hashtag #justiceforwhitehead, was posted on the Freeport Vet Hospital Facebook page which has received many comments of outrage and sadness over the incident.

“That is one of the saddest stories I have ever heard, I can’t even believe someone could do that?????” one person had posted.

Dr Wildgoose learned of the incident from the dog’s owner who is a client of the Freeport Vet Hospital, and who had left Whitehead with a caretaker while he was away. She said the owner is in the process of filing a complaint to the police.

“We, the doctors and staff of FVH, have been informed of an awful tragedy that has befallen one of our client's pets, she wrote on their Facebook page.

“He had given his dog to be in the care of someone while he was away. The dog was pregnant, and the caretaker decided to contact a non-veterinarian to look at the dog, and they deemed the dog to be breached.

“We understand that some caesarian procedure was performed on the dog by the non-vet, and they removed the puppies,” she said.

“This butchery was done without anaesthesia, and ultimately Whitehead possibly bled out and died. There are now allegedly eight puppies in need of a mother to nurse as their mother was butchered and killed by heartless and arrogant people who believe that since dogs are 'just animals' it's okay to 'play doctor' with animals' lives,” she said in the post.

The Tribune spoke with Dr Wildgoose who is convinced that there are several persons, whom she referred to as street vets, out there performing illegal street procedures on animals.

After Whitehead’s death, she stated that the group of non-vets started to search about the island for other nursing or milking female dogs to try to nurse the newborn puppies.

“We got information coming in from all the young men who breed, and this is what we had heard,” she said.

“Whitehead is our patient and the owner of the dog is our client and he usually brings animals in for caesarian and other procedures, but the caretaker took it upon themselves to go to a street vet and he lost his dog,” said Dr Wildgoose.

“I am pretty convinced that there may be more than one person doing this. There is one in particular that performs ear cropping and tail docking for cosmetic reasons to certain breeds.”

Dr Wildgoose said that street vets are not professionally certified or qualified, or licensed under the law, to perform surgical or medical procedures on any animal.

“We understand that they got their knowledge or experience from working with a veterinarian, and taken whatever they know to the streets, and just assuming the position of a Vet, but they have no schooling, no certification, just being an assistant watching and learning.”

“Even though the (street vet in question) has been able to experience and watch these things over a period, he had no legal right under the laws, no license, to do it.”

The local veterinarian believes that there is excessive dog breeding on Grand Bahama.

“A lot of the people who breed dogs overbreed them, and it is mostly for monetary gain without care for the animals themselves, she said.

She stressed that dog breeders need to be more responsible about the way they breed, who they let breed their dogs, and who they sell the puppies too.

“Take your animal to professionals who know how to take care of them, and who care about their welfare, then issues like cruelty and abuse will not come up.”

What happened to Whitehead, she said, “is definitely a case of animal cruelty.”

“To Bahamians, in general, they think animals are just animals, and we can do anything to them, and it is just wrong, and we need to change that.

“We understand that there are at most only feeble laws in place that protect animals from cruelty and we understand the sweeping mentality that making a fuss about 'just a dog' may be trivial to local law enforcement.”

The veterinarian also thinks that there is lack of respect for veterinary medicine, particularly in the Bahamas.

“They think Veterinarians, veterinary procedures, and veterinary work is not a big deal – it is a medical professional and it needs to be respected. If you own an animal it deserves to be seen by a professional, not just by any street person or animal enthusiast,” she said.

Chapter 245, Section 8, (1) states that: no person shall practice, or hold himself out as practising or as being prepared to practise, veterinary surgery unless he is registered or licensed under the provisions of the Act.

“Do not support street vets, do not take advice or suggestions regarding your pets from anyone other than a qualified veterinarian,” Dr Wildgoose warns on the Facebook page.

“This one is particularly bad because the dog died and probably suffered terribly in the process,” she said.

“The HSGB fully supports and encourages action to be taken to arrest the person in this case, and going forward, to stop all non-vets from performing veterinary procedures on animals.”

when i have an animal with special needs, i board the animal. i also instruct the vet to provide any care necessary, i leave a deposit. animals are expensive.

Those savage dogs should be BANNED from this country .......... FORTHWITH ..... Most are kept and bred for nefarious reasons by certain underworld characters.

Pit bulls are generally not savage dogs. In fact they used to be known as wonderful family dogs, "nanny dogs" even. But they are being bred here at a ridiculous rate purely for profit, and bred for extreme physical and temperamental qualities that are detrimental and not recognized by any reputable kennel club. Many are not being treated well, which of course can lead to problems. The breed gets demonized because of idiot breeders who are doing them no favors. Ironic that it is illegal to import bully breed dogs into the Bahamas, but there are absolutely no laws prohibiting the unchecked breeding that goes on. Catching illegal imports at the border seems to be a problem also. Banning a breed has never fixed a problem anywhere it has been enacted. To be effective and progressive, better to require that all imports be spayed or neutered, and start enforcing better the existing requirement that all dogs imported must be at least six months old. At the same time, work on licensing and limiting breeders because as it stands now, it's like the wild west. Any and every one can breed any kind of dog with absolutely no oversight, licensing requirements, or veterinary care.

Meantime, sincerely hope the butcher who killed the dog featured in this story is found and prosecuted to the full extent of the law, including on animal cruelty charges.

I agree with some of your points ........ especially the dog breeding part ..... We have such an unregulated, lawless, selfish society that is resistant to order and rules.