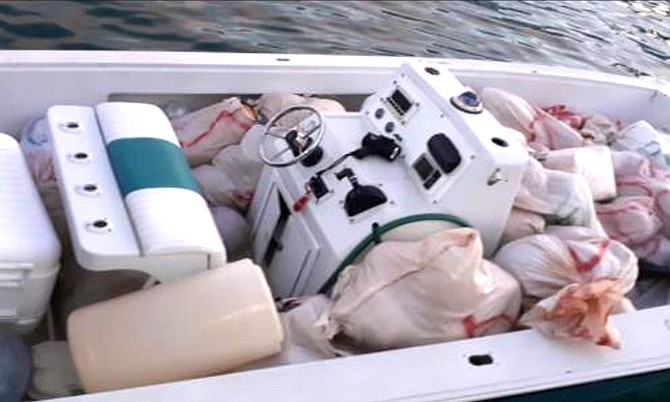 Some of the sacks seized by police in a 21ft vessel.

NEARLY $2m worth of suspected marijuana was seized and two men were arrested in separate drug hauls by police.

Those on board the boat ran the vessel onto a sand bank, swam to land and escaped, police said. However officers searched the boat and found 60 bags of suspected marijuana. The drugs weighed 1,841 pounds and have an estimated street value of $1,841,000.

However, police were able to arrest two men during a separate drug bust around 1am Tuesday. DEU, Marine Support officers and DEA agents intercepted a 15-foot grey and black skiff with two men on board in waters south of New Providence. After they saw police, the men threw two crocus bags into the water. Police recovered them and found suspected marijuana inside. Police said the drugs weighed 90 pounds with a street value of $90,000.

The men are expected to face charges in court later this week.

Export it to Canada. There is a shortage.

In Canada and USA they are now making money out of it quite legally. We spend money tracking it down and then burn it.

They could charge tickets to come and watch and inhale the bonfire!

Make Andros, and maybe another island or two, legal growing fields. Industry and thus people will move there and more farming will most likely follow as warehousing, processing plants, equipment and shipping will follow.

OTHER HIDDEN ISSUES IMPACTING SOCIETY........picture of boat drugs and likely fingerprints good evidence will likely have some lawyer having the accused plead "Not Guilty"....taking up time ....pore taxpayers funds for detention..police salary...prosecution salary...judge salary...prison bus back an forth to prison....man hours wasted people running breaking up car off road make way for prison bus...police investigators looking for accomplices....buyer....way da money to pay for shipment.....POSSIBLE IF FINAMCIAL VALUE COULD BE PLACED ON THE OTHER HIDDEN ISSUES....there may be another view.....but gotta laugh at the usual senarios when the smugglers actually caught in the ocean red handed pictures taken and they pleads "NotGuilty"....an erry body possibly...lawyer...judge....politicians....public...knows dis fer decades now....pore taxpayers money ...

This is a waste of taxpayers money! However, kudos to LEO's for just doing their job.