Minister Quizzed Over Quality Of Caretaking At Centre For Girls 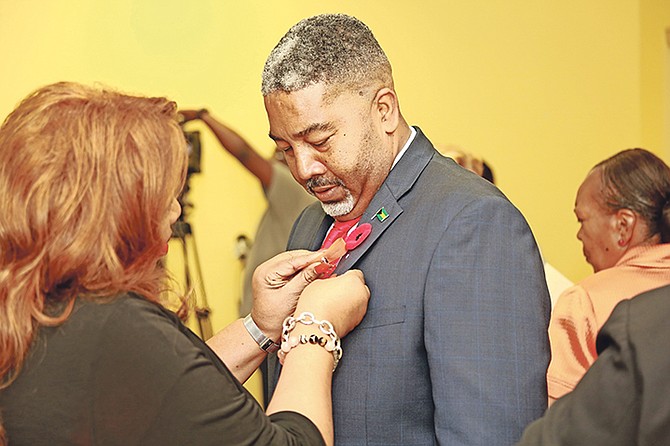 Minister of Social Services and Urban Development Frankie Campbell receiving a pin before speaking at the Elimination of Violence against Woman and Girls Press Conference. Photo: Donavan McIntosh

SOCIAL Services Minister Frankie Campbell faced an unlikely question about the quality of caretakers at the Willie Mae Pratt School for Girls during a press conference yesterday about the series of events planned this month to celebrate men, women and rehabilitation services.

Mr Campbell had just finished announcing the schedule for the upcoming events related to rehabilitative services, International Men's Day, International Women's Week, International End of Violence Against Women Week and Deaf Awareness Month when he opened the door to questions from the press.

It was then that an elderly woman raised an unrelated concern.

The woman, identified as Ms Ramsey, said: "How do y'all pick the staff for these youth (facilities), especially the Willie Mae Pratt (Centre for Girls)? How do y'all interview those staff? I'm asking that because I was invited up there to do some work with the children. I went up there with the intention of passing a skill on to them and the way people spoke to the children, it was like, what? Once you have children under your care, you need to show them love and compassion, not jump all over the children.

"I taught at Uriah (McPhee Primary School) for 15 years in the ghetto and I have children who came out as doctors and lawyers, out of St James Road and Kemp Road and you know what I did? If the child was dirty and they came to the school, I had a tin tub and towels and I had them bathed and I begged money from a corporation, I fed them, I clothed them and I showed them love. You can't just pick up anybody and put them with children who are already suffering and feel as though they don't belong. You need people to show them love and some kind of respect. That is what I wonder, how do y'all interview them?"

People in the audience nodded, many appreciating the woman's concern.

"On becoming the minister of (social services) one of the first things I said to staff as I met them, I reminded them that as much as we do for the least of these God's people, so it isn't Minister Campbell they will have to answer to if they wrong, 'the least of God's people.' But your point is taken. The director is here, the deputy director, everybody responsible is here and your point is duly noted."