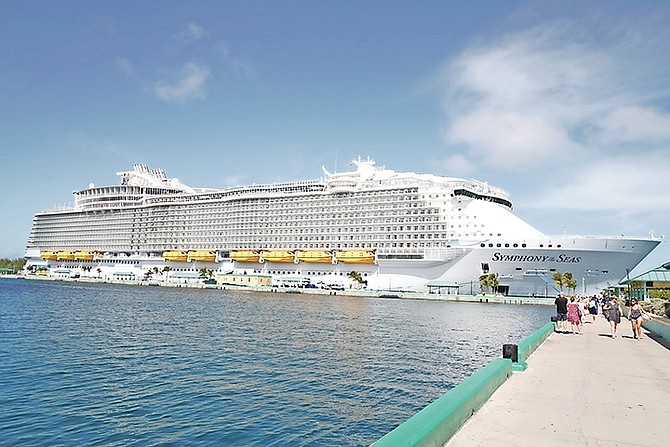 The Symphony of the Seas docked in Nassau Harbour. 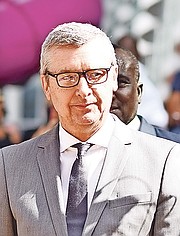 EVEN as he called the Bahamas Royal Caribbean International's most popular destination, RCI President and CEO Michael Bayley suggested The Bahamas is still not doing enough to reward visitors from cruise-ships with satisfying experiences.

Royal Caribbean International docked its newest ship, Symphony of the Seas, in Nassau's harbour on Wednesday, the first stop on its maiden voyage. Mr Bayley's comments, along with several of the company's significant investments in the country, raise questions about what role RBI may have in the future of Nassau's cruise port.

Tribune Business reported last month that the cruise ship industry has discussed submitting a bid to manage the port, which Mr Bayley told this newspaper at the time is "sadly among the Caribbean's bottom".

Though he was less critical yesterday during talks with Bahamian reporters, he emphasised that RBI is eager to partner with the government to improve visitor experiences.

He also rebuffed concerns that the downside to the development of impressive cruise ships like the Symphony of the Seas is that fewer guests will leave ports and spend money in their destinations.

"We have (not seen a decline of people leaving ports because there's so much to do on large ships)," he said.

"We track this statistic. Interestingly, one of the biggest drivers for booking a cruise is based upon destination. It's really the itinerary. The destinations that a ship sails to really are an important factor in the decision making for the customers. They want to have adventurers, they want to explore, they want to create memories and so destination is very important. It's true that customers who have been to a destination multiple times will have a greater tendency to stay on board the ship than to go ashore, I think that would be the same for everybody.

"I would say one of the biggest areas of opportunity is in this idea of destination development.

"We have these discussions with tourism ministers from the Caribbean all of the time. We're developing these ships and creating these experiences, it's also the responsibility of the destination to start planning and thinking about the future and how you want to deliver your destination as an experience to customers and tourists who come from around the world to see you.

"I think sometimes, not being critical, sometimes we could do better in this area. We're very open as partners to work with different Caribbean destinations on developing ideas and ways of improving that experience.

Yesterday, he said: "Making sure you have the right kind of experiences customers want to have when they come to these destinations. I would say that's one of the biggest areas of opportunity for The Bahamas, is this idea of more planning and thinking through. How do you create the right destination experience? You have almost everything you need.

"You have stunning beautiful islands that everyone wants to go to. You have warm, friendly, beautiful people, who are always approachable and friendly.

"There are just some additional things that need to be thought through in terms of the actual experience and some of the infrastructure issues that make it easier for people to travel around. Just teamwork, for example between Royal Caribbean, the government and Bahamian developers and we're happy to team up and help think through some of these ideas that help make The Bahamas a bit more attractive."

Ranking near the bottom of yet another survey. How depressing.