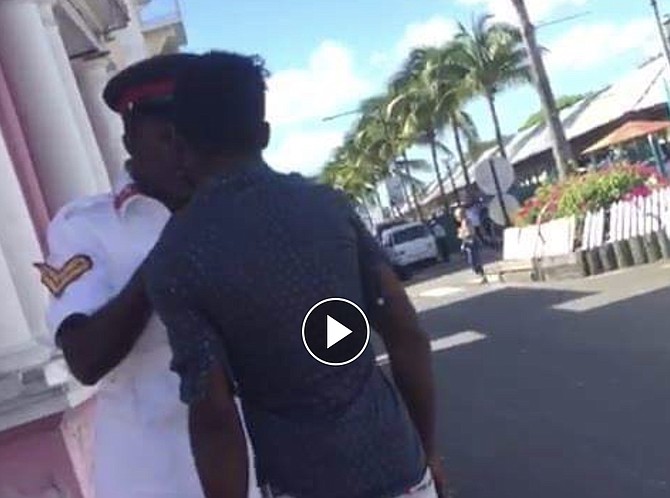 Video from social media by Tribune242

POLICE are investigating the circumstances behind a video of an officer slapping a man, believed to be a tourist, who was accused of loitering in the downtown area.

The incident marks the latest in a string of viral videos that claim to show police officers abusing their authority as law enforcement officers.

Investigations were reportedly launched into more than three recordings this year, but there have been no updates given in any of the cases.

In the latest film a near minute-long clip was posted to social media over the weekend in which an unidentified police corporal, badge number 2791, could be seen scolding a man for loitering in an area in which the officer claimed he had no right to be in.

During the early portions of the clip the officer is seen reviewing what appears to be an identification document, later identified as the man’s passport, all the while repeatedly telling him, he had no right to loiter.

After his review of the document, the police corporal is heard telling the man to leave the area.

The officer hands the document back to the man and in the process of the transfer, is seemingly angered by the man’s reaction and immediately slaps him in his head.

The man, shocked by what had just occurred, turns to the camera and asks: “You see that, right?”

In response to questions and concerns raised by members of the media over the weekend, Assistant Commissioner of Police Stephen Dean said the video had been brought to the attention of the senior command of the force and that an investigation had been launched.

The video has since been shared dozens of times on Facebook and via WhatsApp.

She wrote: “And then we wonder why some of our young men rejoice whenever a police officer is killed. Many of them have deep emotional and physical scars inflicted at the hands of the police. If an officer can be bold enough to unjustifiably slap a man in public while being recorded, just imagine the terror he would have inflicted on that young man in private.”

Ms Galanos continued: “Police officers do not have the authority to slap persons for being rude. If a person’s conduct rises to a certain level, police officers can make a judgment call to arrest him/her for disorderly conduct, using obscene language, resisting arrest and/or assault of a police officer.”

Mr Thompson said the assault also raises concerns for the country’s tourism product, insisting that the ease in which the officer carries out his assault of the suspected tourist, in full view of bystanders, shows a lack of control and respect for the country’s foremost industry.

He said: “When an officer can be so comfortable as to physically assault an alleged tourist in a nation that relies heavily on tourism to employ thousands of its citizens, we can clearly see that something is very wrong.”

“... This practice is considered a norm among citizens all throughout our country. We should ask ourselves why. Why is it a socially accepted norm to be assaulted by those tasked with protecting our civil rights?”

“Are our officers being trained to instil fear via methods of social intimidation? In the year two thousand eighteen why are we sitting idly by when matters of this nature are so commonly accepted?”

Earlier this year, in response to several similar incidents, National Security Minister Marvin Dames has said the government will form a committee to review complaints against officers “to ensure that there is balance in investigations by police”; however, it’s not clear when the committee will be established or whether it will feature public reporting mechanisms.

Mr Dames also said an inspectorate will be introduced for oversight compliance for all law enforcement agencies amid concerns about corruption.

That followed a poll commissioned by Transparency International last year which suggested Bahamians are more concerned and familiar with police corruption than corruption from any other institution.

Take the uniform from this man and burn it!

You have to ask you would not appreciate the answer.

Police officers have to understand that the cellphone is everywhere .......... and this officer had NO reason to slap this fella ........... The COP must discipline him.

Ma Comrades, a probe for what... cause once established the video was not doctored - the slap stands. Now, I am not one for policeman's shootings, beatings up and use force obtain testimony out individuals...... but occasional slap up side head by street beat policeman's as means brings some, 'young man's' - tis time you learn obey when given instructions discipline to head young man's - does seems falls far short must conducting another million dollar kinds probe.... not talk of how there is some lawyer out there just ready sue AG Carl Wilshire and Commish Policeman's for couple millions out PeoplesPublicPurse.

Seems like an easy to win lawsuit. Sad that we the people have to pay for it. I am a grown man who have never been in police custody but to be honest, I am fearful of the police. One of my workers who is "known by the police" told me of an incident when he was taken in a wooded area and beaten with a pvc pipe by the police. His screaming alerted a passerby who call 919. He said an inspector showed up and chastise the officers for not taken him further in the bushes.

Cell phone cameras are a wonderful tool in the hands of the public to capture events like this as and when they happen. It is unfortunate that all the previous assaults by uniformed officers of the state police which went viral have resulted in absolutely no action so far beyond a few empty assurances that a "full" investigation will be carried out. Dash cams in every privately-owned and public vehicle would be good also.

I witnessed a foreigner "yuck" her passport from an immigration officer. They get offended when asked for proof that they are here legally. The young man should not have been sitting on the air condition cover. The officer escalated the situation, but it seems the young man was a bit antagonizing.

Unfortunately racial profiling still continues on Bay Street. The officer assumed that they guy was a Bahamian resident even after viewing his Jamaican passport. The guy may have been a cruise ship passenger. Some guys get harassed and picked up by the police just waiting to catch a bus on Bay Street or walking to the bus stop. Then they have charges put on them and spend years going back and forth to court.

This officer was totally out of order, and should be made to pay. Unfortunately, these younger officers take their cue from their Senior Officers who are often just as rude and brash as this Corporal appeared to be. I can assure you that nothing will happen to this officer, especially if Stephen Dean has anything to do with the investigation. This incident is an everyday experience by many of our young men. Fortunately, this time there was a cell phone recording.

No surprise here. Police abuse has always been the norm here. Police have always acted like overbearing bullying jackasses for as long as I can remember.

Nothing can possibly happen to this idiot cop for doing what he has always done, just like all the rest of them. This is exactly why most people have absolutely no respect for cops!

Youre too kind....describing the bullying aspect....when most ot seems would drive past cars wid heavy tinted windows...etc...since when loitering is an offence....or like throwing garbage on street....or urinating behind da tree ...building...or behind da vehicle....parking in designated Handicapped spot.....cussing in public....hawking an spitting one big nasty yuck ....some prefer to do it driving opening da car door...othere prefer to spit more refined just in any spot.....

Be respectful if you want respect. Very simple.

It's because of the COLOR HIS SKIN!

This has been going on for a very long time.

Many years ago, I invited a college friend from South Africa to visit the Bahamas. He was arrested down town for loitering when in fact he was waiting for me outside of my workplace.
My friend ( a tourist) , without my knowledge, was then sent to the downtown police station and later transported to the detention center.

They did not allow him to make a phone call, as well as confiscated the cell phone that I had lent to him.

After he did not show up that day, my family and I frantically went out and in search for him. We started looking around the downtown area and eventually ended up at the police station. By the grace of God the officers told us that he was there but they would have to send him to the detention center. ( even though we explained that we could provide all of his documents and tickets etc).He was eventually released from the detention center.

It was a horrible and embarrassing experience.

My friend assured me that he would not be returning to the Bahamas again.

Tourism is not only for the Hotel Workers or the Taxi Drivers. All Bahamians have a responsibility to treat our tourist with respect, no matter the color of their skin.