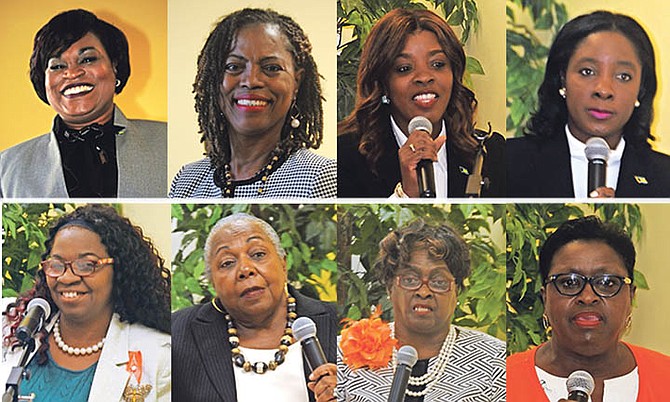 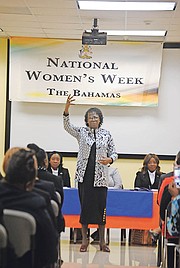 WITH an extremely uneven ratio of men to women in the Cabinet with only one woman holding a ministerial post in the current government, women across the political divide on Wednesday called for more women to come forward and represent the people in politics.

The lone woman in Cabinet, Minister of Youth, Sports and Culture Lanisha Rolle addressed a packed audience of powerful women in society who gathered for the Women in Politics session hosted by the Department of Gender and Family Affairs for National Women’s Week.

“When you are sitting in Cabinet with 18 of the most influential men in the country, there is an immense amount of pressure,” Mrs Rolle said.

“No one is interested in your gender. They are concerned about your agenda and how you plan to empower the people elected to serve.”

Minister of Social Services and Urban Development Frankie Campbell confessed that because of Mrs Rolle’s presence, the men in Cabinet are more cautious of the language they use and their temperament with her in the room. He called for more women to take a stand and represent their communities politically, noting that during his recent trip to the United Nations CEDAW committee, The Bahamas was called upon to level the playing field in Parliament. There is an international goal to see 50 percent of women involved in active politics and in legislative bodies by 2030.

Janet Bostwick, a trailblazer in representing women in politics as a member of Parliament and Cabinet minister for the Free National Movement, who even served as acting prime minister twice, called on the current government to address the disparity between the genders in its Cabinet. She also noted that when women do take a stand in politics, they are often placed in “token positions”, which must end.

Mrs Bostwick shared with the audience filled with females from the armed forces, clergy, civil service, unions and many other sections of society that the efforts of women in politics have always benefitted men.

When the women of the Women’s Suffrage Movement won the right to vote, it also threw out the law that forbade men without properties from voting. Mary Ingraham started, she said, with a one-woman petition to the House of Assembly because her husband had lost his seat and felt that had women had the right to vote, he would have won.

At the time, Sir Stafford Sands presented her petition to Parliament, but told her outright that he wasn’t going to support it and they would get the right to vote “over his dead body”. He lived, however, to eat those words and watch women vote in The Bahamas.

Former Deputy Prime Minister Cynthia “Mother” Pratt moved the audience with her presentation, stressing that women in politics must be able to balance taking a stand for what they believe in with supporting each other. She noted that she and Mrs Bostwick were good friends although they represented opposing parties.

“Women in politics are respected and we respect each other, and this is critical to our success in politics,” she said.

She shared that when she was called to serve as minister of national security, there were “daggers” down her back. Interestingly, she pointed out that there were no qualms about a man taking the post of minister of social services. Mrs Pratt, now 73, called on those willing to serve to have thick skin because as a woman, it is likely that they would be more heavily judged.

“They will pick you up and throw you in the ocean and you will have to sink or swim,” she said.

“You cannot get too far ahead of the people or they will start to consider you the enemy. You must always stay within the reach of the people.”

Former Speaker of the House of Assembly Italia Johnson encouraged women in politics to dig deeper into the history of the country to understand their current role and purpose. She said it was the agitation of her mother to her father (former Cat Island MP Oscar Johnson) that she and her sisters be educated just like her brothers, that made the difference in her life.

Former Minister of Social Services Melanie Griffin called on women all across the country to “find their voice”. She said from the time of slavery when “poor black Kate” took a stand by refusing to do the work she was being forced to do and lost her life for it, and from the time of the Women’s Suffrage Movement, there were strong female voices, but they are becoming weaker.

Former independent candidate Ali McIntosh also addressed the session, pointing out that to take on a role in politics, “you must be in it with a purpose of producing something for this country and not just to win”. Using herself as an example, she said in the 20 years that she has been actively involved in Bahamian politics, she has created the Joshua Institute for Leadership and Public Policy, designed to provide nurturing, guidance and education for aspiring politicians. In addition, she took 17 years to write and complete her book “How to Reconstruct a Nation”.

The final speaker, Democratic National Alliance deputy leader Arinthia Komolafe, said that the perception of women in politics must change. Little girls, she said, do not grow up aspiring to be politicians. When they do consider entering politics, they must consider their children and home responsibilities, which sometimes hinders them from taking a stand. Politics, however, is where the greatest impact can be made “to bring about positive change in your environment, no matter how much politics has been bastardised,” she said.

Her recent trip to America to watch the US mid-term elections was an eye opener for her. Mrs Komolafe pointed out that there are many ways in which women can enter politics, even from the bottom rungs, yet make it to the top.

“If you keep the power centralised, in one place, there will be less involvement,” she advised.

Director of Gender and Family Affairs Dr Jacinta Higgs advised that there needs to be equality in campaign funding, and women should be afforded the same privileges as men in politics. She noted that when she ran in the Fox Hill constituency, her colleague former Senator Gladys Johnson-Sands was also campaigning, and they would share resources because the fact was that they had less than their male counterparts.

Dr Higgs said that women can succeed in politics even with families because in her case, she had a supportive husband who took on the roles that were necessary to keep the household running and the children cared for when she had to take on national duties that took more of her time.

Mrs Rolle said in her current capacity, her husband is also understanding and does everything to assist from school pick-ups to homework to give her the opportunity to serve the nation.