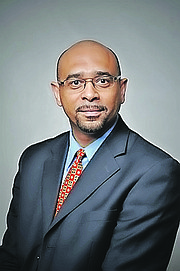 These engines, which typically generate 25 percent of New Providence’s energy supply, not only use lower-cost heavy fuel oil (HFO) but also generate more energy per oil barrel than any others in BPL’s fleet.

With the energy monopoly now having to rely more on its Blue Hills plant, and more expensive fuel, to meet the capital’s electricity needs, Mr Heastie said the fires had exacerbated the spike in global oil prices that were being passed on to BPL customers through its fuel charge.

Responding to complaints over soaring energy costs, the BPL chief said: “Those two [fire-hit] assets would normally produce roughly 63 Mega Watts (MW), but we typically run them at 50-55 MW.

“When we are not running those two units then we have to rely on that capacity coming from the diesel-burning assets at Blue Hills. When you look at the total loan for New Providence, which averages about 200 MW, that there alone is 25 percent of the total load.

Mr Heastie said the per barrel price of Clifton Pier’s heavy fuel oil was currently around $69-$70, whereas that for the diesel fuel employed at Blue Hills - and which BPL is currently having to rely on much more - is around $90 per barrel.

That represents a $20 difference, and BPL’s chief executive conceded that this is what makes “a significant impact in terms of what the customer pays”. He backed Tribune Business’s assessment that the Clifton Pier fires had exacerbated the impact of rising global oil prices in increasing Bahamian light bills, saying: “That’s exactly what’s happening here.”

He added: “It’s also worthy to note, because we do have some customers who feel the fuel charge is something that the power company should absorb, that this is a direct pass through.

“Whatever we use in barrels and price we divvy it up and pass it on to the customer. If we don’t do that, the power company will be out of business. It’s important to understand we don’t make a cent off of fuel; we make nothing off of fuel.”

The Central Bank of The Bahamas, in its monthly report for August, found that BPL’s surcharge had increased by 26.7 percent year-over-year, hitting 17.47 per kilowatt hour that month - a rise of 0.5 percent compared to July.

Global oil prices continued to inch up yesterday, with the Brent Crude and West Texas Intermediate indices, the two most commonly used, hitting $85.04 and $74.85 per barrel respectively. These continued increases, combined with the Clifton Pier fires, highlight The Bahamas’ ongoing vulnerability as a result of its near-100 percent reliance on fossil fuels and the shaky nature of BPL’s generation and distribution infrastructure.

Mr Heastie yesterday reiterated that the stress on consumer light bills and BPL should ease as The Bahamas heads into the fall and winter, given that energy demand typically drops during this period. The utility is also aiming to return a generation unit taken out for maintenance to its supply capacity by month’s end.

Mr Heastie, in an interview with Tribune Business earlier this year, revealed that BPL was already in trouble at Clifton Pier because it was producing just 37-44 percent of its potential 135 Mega Watt (MW) output from units still in their “useful life”.

This, he conceded, had left BPL in an “upside down” position where it is having to consistently run the 180 MW Blue Hills plant at or near capacity to cope with New Providence’s peak summer demand of 240 MW.

Speaking one month before the fires, he added: “The challenge we have is Clifton Pier is not performing the way it should be performing. The question is how we can go about getting the assets to where they can be, and performing at the level they should be.

“That’s an evaluation we’re undertaking right now. I certainly feel confident, based on my experience, that we can get Clifton Pier to put out 80 percent of its rated capacity on the ‘B’ and ‘C’ stations.

“At Clifton Pier today there’s about 135 MW of good assets available to us. Today we’re running between 50-60 MW on a good day. We’re running Blue Hills hard every day, especially at this time of year.”

So our light bill going up another 25% this month? WTF! Where can I buy kerosene?

Knock a hole in your roof. Moonlight is pretty reliable

What caused the fire? Who is getting fired if it was negligence? How much damage will be done to the economy because of this? Why can't we put 65-100 million into renewable/ more efficient energy versus buying hotels to be a drain on the taxpayer? Can't the government do something temporarily about vat on electricity? Oh wait they collect more taxes the higher our bills are. Maybe this wasn't an accident.