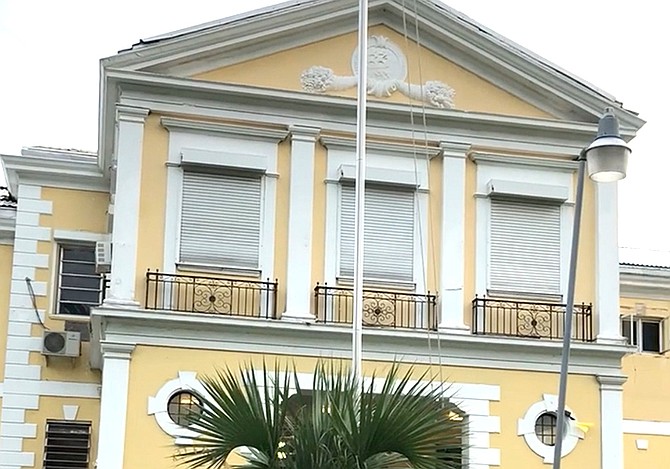 MORE than seventy senior doctors in the public healthcare system voted on Friday to obtain a strike certificate, a move that illustrates that union members are willing to withdraw services if the Public Hospitals Authority does not meet their requests.

He revealed that 96 per cent of members who voted were in favour of obtaining the strike certificate. Dr Munroe noted that meetings will be held later this month with the Department of Labour and the PHA to determine whether physicians will have to take the “ultimate step” of withdrawing services.

Despite this outcome, Dr Munroe said CPSA’s Wednesday meeting with Prime Minister Dr Hubert Minnis went “pretty well”, stating that the meeting and the vote results are “not necessarily connected”.

“Today, the 5th of October, we took on a poll to decide whether or not we would obtain a strike certificate,” Dr Munroe said. “And that need arose because of the manner in which negotiations between our group and the PHA were progressing.”

Dr Munroe said despite over two years of negations with the PHA, “proper, respectful progress” was not being made. Because of this, CPSA’s legal counsel advised the union of the steps that would be necessary “if (it) wished to be heard by the PHA”.

“And this is another step in that direction,” Dr Munroe continued. “Withdrawal of service is a legal right, a constitutional right that we have as employees and therefore we have taken the steps that are necessary.”

“There are 110 persons in this group and 71 per cent of persons actually voted. And of those who voted, 96 per cent said ‘yes, we are willing to withdraw services if our negotiation does not progress in the manner in which it ought to’.

“So that is the end result of the strike poll among our members today: That 96 per cent of persons would be willing to withdraw services if our requests, our proposal is not met across the table.”

When asked how long the union is willing to wait before this withdrawal occurs, Dr Munroe said CPSA will be meeting with the Department of Labour in “a few days” and with the PHA on October 18th.

“Those meetings are going to determine whether or not we have to take that ultimate step,” he said.

Dr Munroe added that consultant physicians primarily do most of the decision making and complicated procedures in health services.

“Junior physicians follow instructions that are given from a senior level. So once you remove the senior level, the real comprehensive decisions that can make the difference between outcome would be out of the healthcare system.”

Dr Munroe also responded to reports that a source of the CPSA’s contention is that the junior doctors’ industrial agreement has more privileges and benefits than the consultants’.

“Yes it does. And that is because in 2005 a decision was made that since they are in a separate group, that they would not continue the tradition that the Ministry of Health used to follow. And that is, benefits that the junior physicians were given, it was passed across the entire group. That was stopped in 2005. So there is a difference. “

“(These differences consist) primarily the things that we speak of,” Dr Munroe continued. “In terms of increments in your salary, we get none. In terms of a health insurance, there is no provision, neither do we get pension or any sort of gratuity.

“The junior physicians get their gratuity at the end of their contracts. Persons like myself do not have a contract. So there is no gratuity. I am awaiting a pension plan. And there is no pension plan in the PHA at this moment.”

On Wednesday, the CPSA met with the prime minister.

“That meeting went pretty well with the prime minister, but the two things are not necessarily connected,” Dr Munroe said. “Meaning that the prime minister has promised that he will see to it that our requests, our concerns, are addressed in a timely manner, based on the priority that we give them.

Due to Monday’s holiday, Mr Ferguson estimated that by Wednesday Dr Munroe “ought to have in his possession a certificate from the minister of labour certifying this poll”.

“Once that is done, the president would decide, along with his executive, in collaboration with the (TUC), what is necessary to fulfill those concerns,” Mr Ferguson said. “Pension, is a must. Insurance is a must. Salary adjustment is a must. Increment is a must. We should only take about a day to do that.”

When asked if her union is prepared to take a stand with the doctors and withdraw services if the CPSA does, Ms Williams replied: “We said that we are together. When we say that, what do you think we mean?

Contacted by The Tribune for comment, Health Minister Dr Duane Sands simply said: “We continue to work in the interest of the people... the patients of the Bahamas.”

As Universal BahamaCARE drifts further away we colony islands as healthcare jumps from crisis to crisis - just maybe - Comrade Karl Marx may have had gotten it more right about capitalism than given credit for?

Actually, Karl Marx was right on most of his analysis. We are just slow to learn, as evidenced everywhere we look. Accepting failure is one of the most difficult things to do.

You appear to be right on both counts, Comrade! Bahamas public healthcare is almost non-existent at present. This capitalism thing is not working for most.

"...96 per cent of members who voted were in favour of obtaining the strike certificate."

Voting for permission to beg. That's even worse than slavery.

Why is it PeoplePublic remain dismayed over quick grab fees from users PMH, by a health minister who's explanation granting Janitorial contract at PMH leaves them all puzzled..... And there is the conflicting controversy of pay scale increase BPL chairman which far exceeds that of pay grade Comrade Supreme Court Justice Bahamaland? The Imperial red shirts cabinet are generous Paymasters when it comes writing cheques with PeoplesPublicPurse's chequebook.

Its amazing how they could find 78 doctors to vote but you cant find one during their schedule shift at PMH.

We do not have Capitalism DDK, we have bastardized Tribalism. With respect to the Dr's, the incontrovertible need has met the unavailable supply. And here we sit, the inevitable result of our actions repeated over decades.