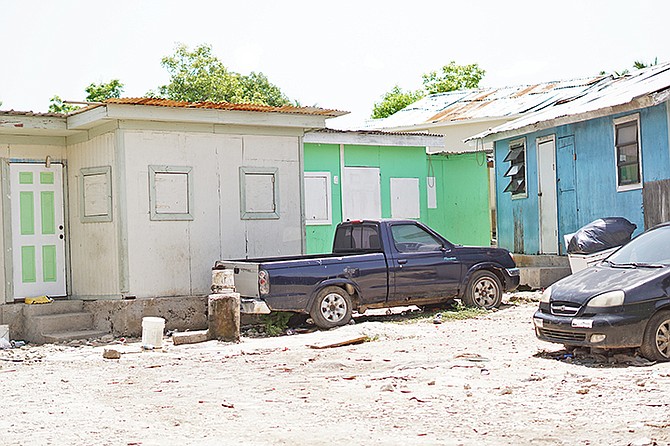 THE government is seeking a Supreme Court order to restrain shanty town residents and occupiers in New Providence from building and/or modifying any structures ahead of a judicial review of its plans to eradicate those communities.

The government, which is prohibited from executing its eradication plans via an injunction, is now seeking a variation of that order to restrict the residents and occupiers of those communities from constructing, erecting or altering any structures "otherwise than in accordance with the relevant law".

The government claims it has been made aware that certain residents or occupiers of shanty towns in New Providence have "continued to engage in the construction, erection and alteration of buildings or structures" within those areas without obtaining building permits, in violation of the Buildings Regulations Act.

And it says such activities "injure the public interest in the proper enforcement of planning laws, creates risk to human safety by the construction of sub-standard housing, and is detrimental to the orderly development and use of the environment".

The aforementioned are contained in an ex-parte summons filed by the government on October 3 to have the existing order varied.

Non-profit group Respect Our Homes Limited (ROHL) and Luanne Nonord and the 177 residents are listed as the applicants.

In August, Supreme Court Justice Cheryl Grant-Thompson ordered the government and utility providers to halt any planned service disconnections or evictions in shanty towns pending a judicial review of the Minnis administration's policy to eradicate those communities.

The injunction prohibits the government, directly or through its agents, appointees or employees, from taking possession of, demolishing any building on, or otherwise interfering with the enjoyment of land in shantytowns in New Providence by the 177 applicants for the judicial review, as well as other residents' and occupiers' of those communities, by disconnecting any utilities "other than pursuant to the relevant enabling legislation" pending the determination of the action or until further order.

Leave for judicial review was also granted around that time.

In September, however, Mr Smith warned the government that it was treading on the "thin ice of contempt" for pressing ahead with efforts to eradicate shanty towns in the Family Islands despite the pending judicial review.

The government's position, according to Mr Foulkes, is the court injunction blocking evictions and demolition in New Providence was not extended to other islands, and enables the government to forge ahead with mobilising efforts in the Family Islands. Mr Foulkes is also chairman of the government's Shanty Town Action Task Force.

However, Mr Smith said 88 of the 177 shanty town residents seeking judicial review of the government's decision are from Abaco, and questioned why the government didn't opt to halt the process completely as it has done with the gaming taxes on web shops, which was halted pending the outcome of court action.

Shanty town residents are seeking to ventilate concerns the government's "eradication policy" and subsequent evictions are unlawful, unconstitutional, and motivated by ethnic discrimination without clear title to land ownership.

An affidavit filed by ROHL director Stephanie St Fleur contends the challenges faced by people of Haitian descent since the 1950s have dramatically increased, most notably since November 2014 when new immigration and shanty town policies were introduced.

She notes land was leased in New Providence and Abaco for farming, and lease holders or farmers invited workers onto the land the majority of whom were immigrants from Haiti, who over the years established homes. Many of those workers became citizens, permanent residents, or married Bahamians, according to Ms St Fleur, who stated immigration issues are an integral part of this case.

The affidavit also points to an explosion of population growth and the consequent need for more land for urban development.

I am not one be advising comrades tell courts to take a hike...... but don't we have zoning, building and health regulations..... And, why hasn't there been swift legal and publicly exposing action ....... including forfeiture properties being taken against 27 well known to government, Shantytowns Slumlords?

The law does not apply to shanty towns , but it does apply to the man in Lyford Cay. The Drama King runs things.