Taranique – So Glad To Be In America 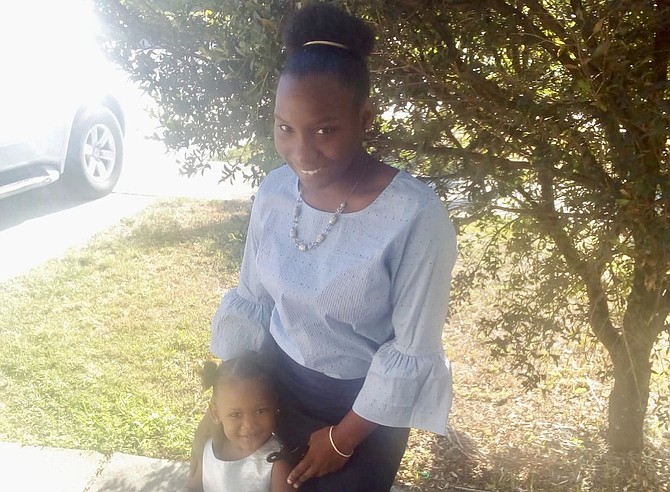 Taranique Thurston, 16, in Florida with her two-year-old sister, Royal Carey.

SICK teen Taranique Thurston is slated to see a US doctor today after obtaining an emergency medical visa with the assistance of a South Florida congresswoman and a local lawyer.

Frederica Wilson, representative of Florida’s 24th congressional district, was said to have intervened in the process that ultimately led to the Bahamian-born 16-year-old being awarded an emergency visa on her government-issued certificate of identity.

The certificate is primarily used as a travel document for non-citizens legally residing in The Bahamas under the age of 18, who were also born in the country to non-Bahamians.

In 2014, the government announced it would no longer issue the document, and existing documents would not be renewed as it ushered in a stricter immigration policy that demands all residents obtain a passport of their nationality.

A US Embassy representative confirmed last month it would only accept a valid passport for visa applications.

“I am very grateful for the contribution by Minister (of Foreign Affairs) Darren Henfield, Congresswoman Wilson, The Tribune and all those who contributed to saving Taranique’s life, and giving her a future,” said attorney Fred Smith, QC, who legally represented Taranique in talks with the Ministries of Foreign Affairs, Immigration, and the American embassy.

He continued: “I look forward to the government of the Bahamas reforming the laws of the Bahamas so that this kind of tragedy doesn’t hurt the thousands of other young citizens-in-waiting caught in this immigration limbo land in the Bahamas.”

The teen was diagnosed with a brain cyst and her doctor’s referral for US treatment was stalled due to her irregular immigration status.

Ms Caty is a naturalised citizen; however, when she was regularised in 2013, she’d already given birth to three children. Taranique’s father, who is not married to the teen’s mother, is a Bahamian but unable to transfer his citizenship under Bahamian law.

As a result, Ms Caty said she was told her daughter would have to wait, like she did, to apply for citizenship at 18.

Taranique was issued a certificate of identity by the Bahamas government in early August, which listed her as a Haitian national.

We really need to do something with our immigration laws to bring us inline with other progressive countries. I can never understand how it is possible that a child, born in the Bahamas to a Bahamian father, is not considered a Bahamian. This just simply makes no sense!

Oh do you mean like two Haitians children who were not born in Haiti. . .even though their mother and father are Haitian citizens holding Haitian passports and their children are not Haitian citizens according to the Haitian constitution?? By the way. . .birth do not confer citizenship in most developed nation. . .in fact only USA does. . .and that now is in question there!! They say illegals are not in the "born there" category!

Fully agree CatIslandBoy........but this then raises the other issue of the many women bearing children by sugar on dere tongue Bahamian fellas.....sweethearting.... making ....plenty children and con artists to women...ducking dere responsobility of being responsible fathers....leaving many many ....to struggle in dire economic hardship ...growong up...majority of women ...actually many teenage children....being single parent......AND ....the RELIGIOUS GALLERY....downplaying the role and Rights of Bahamian women....

Good, happy to know that this young lady will get the help she needs. Just please pay all of your bills before you leave "America". The Bahamian people can not afford to be responsible for them.

Freddy tell your immigrant friends not to come to our "this immigration limbo land in the Bahamas.” Tell them to stay RTF where they are we have enough "issues" without their stink all over our country and it's dirty enough without their trash...

Their stink? A little low don't you think? I know many Haitians as friends, family and co-workers and none of them "leave a stink" like you suggest. . .

Yes, Bahama Red. It was a feeble attempt by the previous government. By including it with other questions, surrounding different issues, our D-Average masses was totally confused, and hoodwinked by others with different agendas. What a disgrace!

Exactly...they allowed propaganda rather than common sense to dictate how they voted. And shockingly many of them would have benefitted.

Wherever someone is born is where they are a citizen of unless they choose otherwise it seems to me. Why is it so difficult to understand this? And whatever happened to if the father is a Bahamian then the child has a right to Bahamian citizenship????

No, very few countries at this time give citizenship by birth. USA and a few south and central american countries only. USA will come after you to pay taxes and the south americans make voting mandatory or they take away citizenship.

however, most countries allow their citizens to pass their citizenship to their children-- the Bahamas law is discriminatory to unmarried men and to women married to foreign men.

Yall keep referring to this BAHAMIAN FATHER who has been absent throughout this entire ordeal. It is not farfetched that this "Bahamian father" is another misrepresentation by this woman. Even if the referendum had passed, an invisible father still can't pass his citizenship.

Why is Fred Smith making it seem as if the Bahamas is at fault for "the immigration limbo" in this land? Isn't that the fault of the parents?