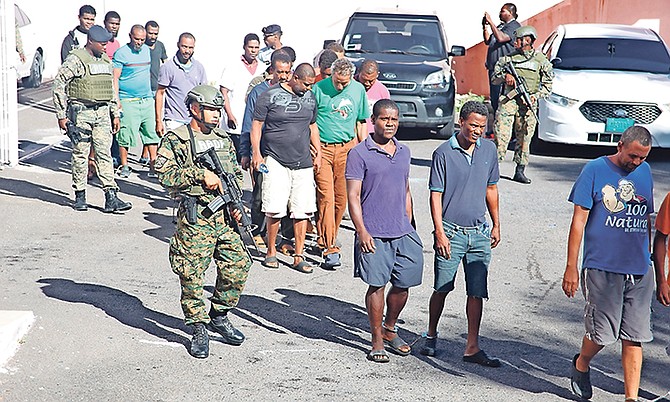 Some of the Dominican poachers arrested by the Royal Bahamas Defence Force.

MORE than 120 Dominican poachers have been fined $52,000 each for “stripping” and “raping” the country’s waters of close to 70,000 pounds worth of fisheries products, with the captains of the crew ordered to pay close to double that amount - and a warning: “Do not come back.”

Chief Magistrate Joyann Ferguson-Pratt said the 121 crew members are to pay a $40,000 fine, as well as serve six months at the Bahamas Department of Correctional Services (BDCS), for having pillaged the Bahamian seas of some 68,000 pounds of marine life on October 13.

The three captains of the Dominican “motherships” used in furtherance of the illicit acts, namely 33-year-old Roberto Martinez, 36-year-old Javier Castillo Gil and 25-year-old Johanam Del Rosario, were fined $80,000 each, and also ordered to spend six months in prison. Failure to pay respective fines would result in an additional six months in prison for all 124 men, the chief magistrate said.

Martinez, who is also alleged to have shot at members of the Royal Bahamas Defence Force (RBDF) with an unlicenced shotgun in a bid to evade capture on the day in question, will stand trial on January 25 after pleading not guilty to three separate firearm-related offences.

Additionally, each of the 124 men, the captains included, were fined $3,000 for being found to be in possession of a collective 21,195 pounds of undersized crawfish measuring less than three and one quarter inches from the base of the horn to the end of the jacket; 303 pounds of undersized Nassau grouper weighing less than three pounds each; 30 air compressor tanks and 15 spear guns, totalling $12,000 per person.

Failure to pay those fines would result in an additional two months in prison, which would run concurrently with their punishments concerning the first count of engaging in illegal foreign fishing within the exclusive fishery zone of the Bahamas.

As all the fines are ordered to be paid consecutively, the crew members each have to pay a total of $52,000 in fines, while the three captains have to pay $92,000 each.

Chief Magistrate Ferguson-Pratt noted that several of the poachers are repeat offenders, but said she was not minded to impose any additional punishments on those individuals, as she felt the aforementioned sentences were “sufficient” enough to send a “clear message” to them for their actions.

However, she reminded them they have all been fingerprinted, that she has the records for all of them, and that the immigration system and police records would reveal who they are should they reoffend.

Upon paying the fines and completing their custodial sentences, the 124 men are to be turned over to the Bahamas Department of Immigration for deportation.

The sentences were handed down on Saturday, marking the end of two days of court officials seeking to arraign the group, battling issues such as incorrect names, a language barrier, and other issues in the process.

When the issues were finally ironed out on Saturday, all of the men, some as young as 19 and as old as 58, admitted to illegally taking thousands of pounds of grouper and crawfish from Bahamian waters.

Prior to the Dominicans receiving their sentences, their attorney Keevon Maynard, in making a plea of mitigation, said all of his clients are from a very “destitute” and “poor” place in the Dominican Republic, and that they were fishermen only seeking to provide for their respective families.

However, he said they were all remorseful for their actions, and have since come to respect and appreciate the gravity of the offences they committed, something Mr Maynard said was evidenced by them all saying they were “culpable”, which is Spanish for guilty, from the outset.

However, Chief Magistrate Ferguson-Pratt said while she acknowledged Mr Maynard’s submissions, they “must be trumped” by the seriousness of the offences committed and the effect they had on Bahamians, in particular local fishermen, as well as the country’s marine seabed.

She further noted the poachers have caused a “considerable strain” on the Bahamas’ resources; for example, she said the court was forced to sit on a Saturday to accommodate their arraignments.

“There are a great deal of fishermen in this country who for centuries have taken pride in their livelihood,” the chief magistrate said. “…This is how they live. And this court cannot countenance any sort of tolerance for others coming into the commonwealth and, as it were, taking bread from the mouths of Bahamians.

“There can be no reasonable explanation whatsoever that we have been stripped and the waters have been raped of almost 70,000 pounds of shelled and scaled fish. And so it is my duty to send a strong and clear message to those of you who have pleaded guilty and also to would-be offenders that the court has a zero tolerance for these actions.

“And we must do so in order that there will be some fish left in our waters for generations to come.”

She added: “Do not come back to the Bahamas and steal from our waters. It is unacceptable.”

During Friday’s proceedings, it was indicated that some nine of the poachers needed medical attention; in one instance, one of them is deaf and diabetic, and was said to be very low on insulin at the time. There were also reports of hypertension among the 124 men, and another one had a very swollen right foot with what appeared to have multiple lacerations.

Then, during Saturday’s proceedings one of the men who speaks good English indicated that only two of the nine men were able to see a doctor. It was also said that while the diabetic was seen by medics and given a shot, he wasn’t given a refill of insulin. Additionally, the man with the injured right foot said the medics cleaned and dressed his wounded foot, but did not give him any medication.

However, with the assistance of Paul McWeeney, honorary consul to the Bahamas for the Dominican Republic, and a senior police officer, and pursuant to the chief magistrate’s inquiries, the men were able to receive the various medications needed for their ailments, which were distributed to them after their sentencing.

According to initial reports, on October 10, the United States Coast Guard Cutter (USCGC) Vigilant with a RBDF ship-rider on board reported the sighting of a fishing vessel from the Dominican Republic north of the Republic of Haiti. The Dominicans on board the vessel indicated they were heading to the Bahamas.

The RBDF was subsequently notified and HMBS Madeira was director to intercept the Dominican vessel in the event it entered Bahamian waters.

HMBS Madeira later sighted the three vessels at daybreak on October 13, with skiffs in the water near Cay Lobos, a small cay on the southern edge of the Great Bahama Bank some 12 nautical miles north of central Cuba.

None of the RBDF’s marines were injured during the incident. However, one of the three steel-hulled vessels ran aground in Cuban waters while trying to escape.

The RBDF immediately notified the Cuban border patrol of the incident and informed the Bahamas’ Ministry of Foreign Affairs, which then sought the assistance of the Cuban government in apprehending the vessels. As a result, the Cuban Border Patrol apprehended the three vessels with 124 members that day, and turned them over to HMBS Madeira and HMBS Durward Knowles the following day.

The poachers were brought to shore last Tuesday and remanded to the Carmichael Road Detention Centre.