Insight: The Power Rests In Your Hands Alone Pm Minnis 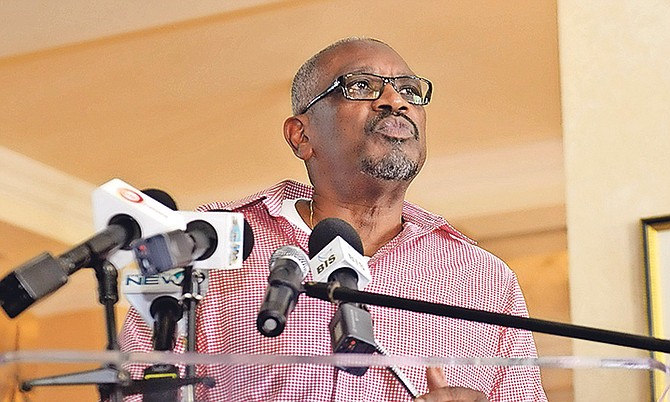 HEAVY hearts laden the country in the wake of the murder of Police Inspector Carlis Blatch, Aide-de-Camp of Governor General Dame Marguerite Pindling. When the carnage in the country is localised to a bloodthirsty criminal element fixated on slaughtering each other in the streets, we simply pray not to get caught in the crossfire. However, when an innocent civilian is preyed upon, the reality that any of us can be snuffed out any time becomes a chilling revelation. It is much more alarming when it happens to a member of society whose sworn duty is to protect and serve.

Although the late Inspector Blatch was away from active duty and assigned to the Governor General’s team for the past 14 years, the fact a policeman was murdered in the cold-blooded fashion he was is enough to make the hairs on the back of your neck stand up. Slain in front of his child, a family has been wrecked by the thoughtless attempted robbery in such a high traffic area. And for what? To roam the streets for a few days longer, hunted like an animal before you are eventually caught and incarcerated?

Perhaps that level of thought is not even explored by today’s criminal element. Certainly, there is not much to fear for someone who has already committed themselves to living out their days executing acts of violence and crime. Our court system, though marginally improved, has long been a revolving door, where murderers get out on bail – in many cases to be murdered themselves before ever being tried. And while imprisoned, many of the inmates are quite comfortable despite the terrible living conditions.

It’s a part of life that comes with the territory for them.

Time and again we have seen where the hands of our legislators have been forced to turn it up a notch. Yet, we have been stuck doing the same song and dance with our hands tied by the Privy Council – a decision-making body far away from the bloodshed on our streets.

Is it not curious why successive administrations have not done what is necessary to remove this nonsensical blockade from the pathway of enforcing capital punishment?

Certainly, former Prime Minister Perry Christie wasted our time on such matters. And the last hanging in The Bahamas took place under the Ingraham administration in the year 2000. Based on the Privy Council’s characterisation of the “worst of the worst”, who among us can say that in 18 years and amid recent record-level crime, that we have not seen some acts fitting that description?

Furthermore, there should be no group outside The Bahamas pulling strings on our government when we are the ones who suffer the effects of their blanket judgments.

In Opposition, Prime Minister Hubert Minnis spoke in a tone many Bahamian people appreciated. His “popping the necks of murderous scumbags” statement has been requoted in the news many times since its first utterance, and still serves as the benchmark for what is expected from this administration.

When speaking with reporters this past week, the prime minister suggested he is somehow powerless in the matter. He stated that he if could respond to the criminal element in the manner he wants and remain within the confines of the law, the Bahamian people would see a “changed man”. While we can appreciate that the prime minister vilifies murderers, the steps he has to make - being the individual with the sole authority to do so - are not as extreme as he portends.

As a start, the prime minister can instruct the Attorney General today on trying to find a path to remove the Privy Council as the final Court of Appeal. This would certainly get us on the path to capital punishment once again.

In the interim, the prime minister can also up the ante on the crime fight in other ways that make it much harder for criminals to hide. Stricter gun penalties would increase the pressure on offenders to cooperate with the police on how the weapons are making their way into the country. Surely, the government can perform case studies on other countries to ascertain the correlation between the strictest of gun control mechanisms and crime statistics.

Continuing to get guns off the street is a laudable accomplishment by the police force, but making criminals think twice about taking the risk would also bolster their efforts. In which case, the legislators have to get to the drawing board.

Also, we are still waiting on CCTV to be fully operational. Other jurisdictions such as the US, the UK, Canada and Australia have all experienced the benefits of CCTV as a crime prevention tool, as well as a means of detecting and identifying offenders.

Last month, National Security Minister Marvin Dames announced the RFP for CCTV was completed. While we know the government has its plate full, it is difficult when tragedies take place that could have been avoided if such a deterrent was in place.

Here, we have a murderer, committing such a bold crime in a public space. One can only hope that we could have done more to protect the governor general’s slain aide.

We believe the prime minister really wants murderers to hang. However, unless he intends to be viewed as Christie 2.0, he will have to make some uncomfortable decisions. After all, that is at the core of leadership – the ability to make the decisions that others enjoy the liberty of not making.

Why do successive Governments continue to give lip service to crime and illegal immigration?

Most of our issues with both can be fixed with constitutional referendums (to entrench capital punishment and/or remove the privy council as our final count of appeal for criminal matters) to fix such things.

I’ve said it before and I’ll say it again. You, Dr. Minnis, are the PRIME MINISTER. You have the right to fix the laws. After all this is what Parliamentarians do. You do not sit on your as* and give a press release because your good friend, the Governor General, lost a close aid in her camp. What do you gain from these things? Why pander to the press and public when in another week or more there will be another heinous crime that will make this one pale in comparison.

I tell you this country was lost the day Archdeacon William Thompson was murdered in his own church. We’ve also had a young woman from St. Kitts murdered while breastfeeding feeding her baby and an 8-year-old murdered while doing his homework. I can think of many other cases where the crime was heinous enough to cause a public outcry but in each and every case the same lip service was given by the persons who had the power to bring solutions and yet nothing was done.

Can we please just stop doing this? It’s old and like the boy who cried wolf, nobody with any common sense believes you anyway.

Get on with the business of actually governing this country. The people that elected you are waiting.

My condolences to the family of the officer. But Minnis must realize that every life is precious. Don't just get outraged by one murder, be outraged by them all. DO SOMETHING ALREADY!

Very well written "Insight". I couldn't agree with the writer more. I do believe the Prime Minister has the power to get the process started. Maybe he can put it to a vote.... a referendum. If the people are serious, they would vote to remove the Privy Council as the final court of appeal in our land. Let's see how truly serious we are!

Many of these hardened criminals are not afraid to spend life in prison. Maybe with death looming over their heads, something may change. We do not have to use hanging, but perhaps we can bring in death by lethal injection. Maybe that can satisfy these so called Human Rights Groups who continue to poke their noses in matters that they do not understand.

In any event, every single murder that has occurred, including the most recent one, is tragic. My condolences are again extended to all of those who have been impacted by Officer Blatch's senseless murder.

Unless and until the police stop abusing innocent young, men, locking them in rooms and beating them to a pulp, knocking their teeth out in the public's view and threating to 'make them bleed from their necks, we will continue to have the problem with angry young men wreaking havoc on the rest of society. Uniforms should not give any police to carry on like an outlaw gang banger.