Jamaal On Fast Train To China 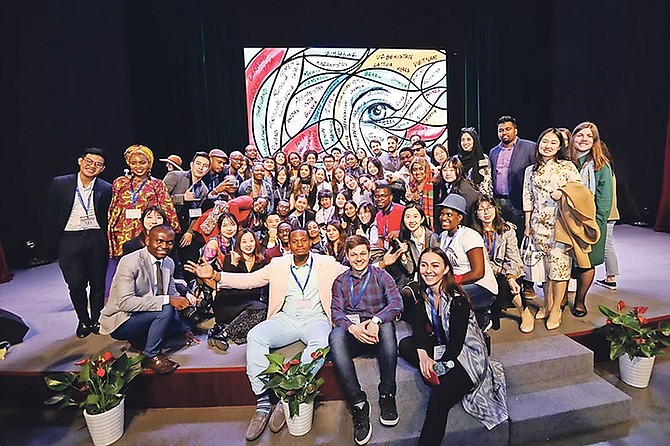 Jamaal Rolle’s digital work was studied by 120 delegates from 83 countries when they met in China for the Third International Youth Forum on Creativity and Heritage Along The Silk Roads. 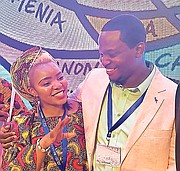 Jamaal talks to Kitso Rantao, a delegate from South Africa.

“A Vision United” — the latest project by renowned Bahamian artist and The Tribune cartoonist Jamaal Rolle has garnered international acclaim after it became the focal point of the closing ceremony of UNESCO’s Third International Youth Forum on Creativity and Heritage (IYF3).

The piece, a depiction of unity through colours and abstract shapes labelled with the names of all the countries invited to the youth forum, was crafted during a four-hour train ride between the two Chinese provinces that hosted the seven-day event - Changsha and Nanjing.

In an interview with The Tribune yesterday, Mr Rolle referred to his experience in China as “life changing,” dubbing the forum “the central point” for what the world can be when great minds and opportunities come together.

IYF3, according to event organisers, aimed to strengthen exchanges and cooperation among the media art cities and creative young talents of the ‘Belt and Road’ nations.

The central focus of the forum was the drafting of the Changsha Initiative, a five part working document that looks to address creativity, innovation, exchange, capacity building and youth work in the countries involved.

The initiative gives way to a series of concrete recommendations and insights devised by participants on how to promote and achieve the United Nations' sustainable development goals related to creativity and heritage.

This year was the first year Caribbean delegates were invited to participate in the discussion.

Mr Rolle was The Bahamas’ representative among the 120 millennial leaders from 83 countries.

He said, feeling moved by the enormity of the discussion and the level of participation offered to him, being from such a small country, he thought it necessary and essential to commemorate the moment.

“It was the train ride. I just felt so happy to be there and to be heard among so many people. The thought popped into my mind that when we, all of us there, work together so much can be achieved. We proved that and I wanted to show it,” he told The Tribune.

“I was sitting down on the train and just got to playing around on my iPad and it all started to come together. I didn’t see it as a big deal until everyone there started to react to it; my friends, the organisers, the persons from UNESCO, everyone was so moved by it and it became what it became,” he added.

“For me it came down to inspiration. I was just moved by my counters and the people I met during my time in China. It’s such a special place and to see it, and to see so many people from so many places coming together; the thought popped into my head and this is what it ended up being.”

To close out the forum, Mr Rolle’s artwork was projected onto a large 20-ft backdrop, where it was viewed by attendees and officials; many of whom posed for a photo opportunity with the artist.

Kitso Rantao, a delegate from South Africa who viewed a “A Vision United,” said: “I think that if you look at it metaphorically, it speaks of how the youth are coming together to have a unified vision which is something that previous generation could not see eye to eye.”

He added: “Generations of war that we have inherited, generations of segregation, generations of discrimination and not understanding each other, and us coming together in this space, working towards one vision, is a very power image and I am very happy that South Africa is part of a bigger vision for a better world.”