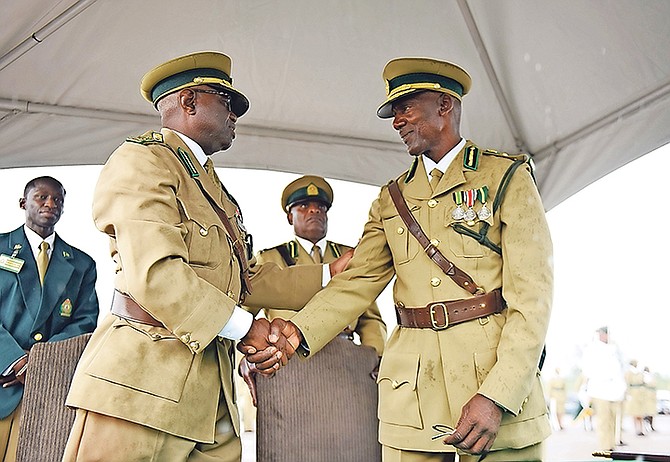 Charles Murphy, right, takes over as the new commissioner of the Bahamas Department of Correctional Services. He is seen shaking hands with the former commissioner Patrick Wright. Photos: Shawn Hanna/Tribune Staff

Scenes from the Handing Over Ceremony. Photos: Shawn Hanna/Tribune Staff

AS rain poured around him yesterday afternoon, Charles Murphy accepted the mantle as the new commissioner of the Bahamas Department of Correctional Services.

“Today’s handing over ceremony is another milestone in the development of the institution,” he said. “The rehabilitation and preservation of inmates’ rights is a subject of particular importance to this administration and it is one of priority for our government. We have attached central importance to the advancement and development of a correctional framework that seeks to address the principles of human rights for the incarcerated and the provisions of rehabilitative strategies and programmes for the same. We are truly committed to supporting correctional reform in the Bahamas by adopting an holistic approach to implemented changes to the criminal justice and rehabilitative system, as a whole. 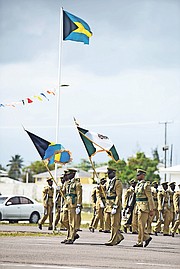 “Note that our government fully understands and has also embraced the many complexities involved in the rehabilitation of offenders as we seek not only to reduce recidivism but ensure that ex-offenders become law-abiding and productive citizens with the necessary educational and technical prerequisites upon release. Hence, since coming to office we began taking immediate steps to reform and transition the facility, while maintaining its success. Therefore, Commissioner Murphy you can expect our government’s full support as the Department of Corrections continues to evolve into a fully functioning correctional facility. This will entail the continued development of comprehensive strategies that will enable the corrections facility to adapt, adjust and overcome the changing dynamics of rehabilitative services for the country.”

Commissioner Murphy has been serving as acting commissioner of the department since his predecessor Patrick Wright retired.

When he spoke yesterday, he told correctional officers that no form of corruption will be tolerated during his leadership and all staff will be held to the highest ethical standards.

“‘The trust that the Bahamian people have reposed in us will not be betrayed without being challenged,” the new prison chief said. “Integrity is our watchword.”

“The appointee superseded two women who were in line for the job and from all accounts seemed qualified for the job,” he said. “There appears to have been partisan political motivations in making the appointment.”

Murphy needs to demand that the Government move the Max Security to a deserted cay .... no need to have them taking up space in HMP .......... Let them cut rock until they die.

Yes, yes one visit prison's High Security "Slop Pails" Wing over past years, should've been preparation top job promotion, yes, no,,,,, And, shouldn't comrade looking somewhat lots years aged, not have been sent on he sunset retirement, not upgrading his position and paycheques, yes, no?

Are you retarded or just plain STUPID ?

That is how everyone who works at HMP look ..... a Grim Reaper.

Right again Tal. Unless some has been "in the system", knows which closets have skeletons, knows which rules are rules and which rules are simply suggestions (after years of experience) - they could not possibly be chosen for this job. That's why I had to laugh when they said they considered foreign applicants. They know foreign applicants would follow rules and treat guards like guards and prisoners like prisoners and treat both of them as human beings. Wouldn't want that here.

Despite having spent all those years the man is more than qualified. Only thing lacking is a PhD. I may be wrong but this could also signify a reality that exist throughout the public service, persons lacking the necessary qualifications to elevate but want to. But I could very well be wrong in this particular case.