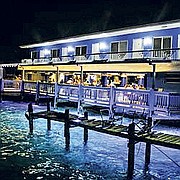 A WELL-KNOWN American businessman in Bimini was shot multiple times and killed in his home at Bimini Bay opposite Resorts World early yesterday morning, the Royal Bahamas Police Force has said.

While his identity has not been released, The Tribune understands he is 47-year-old Alain Perez, the owner of tourist hotspot Big John’s Bar and Grill in Alice Town. He is a native of Miami-Dade County in Florida. His business has sponsored an annual back-to-school drive on the island for several years.

According to police, the incident happened shortly after 1am. “A male was shot multiple times in the upper part of his body, while at his residence in Bimini,” police reported yesterday. “The male victim was taken to the Bimini clinic where he later succumbed to his injuries.”

Officer-in-charge on the island Superintendent Henry Rolle confirmed yesterday that the perpetrator is still at large.

He said police were still in the early phases of their investigation and had not yet determined a motive for the killing.

“The death of well-known businessman and resident of Bimini early this morning has sent shock waves through our community,” the MP said in a brief statement yesterday. “This incident is truly tragic and a rare occurrence in our beautiful island.

“We are hopeful that investigations by police will result in the capture of the person or persons responsible and brought to justice.

“I have spoken to the officer-in-charge of the Bimini District, Supt Rolle, who has indicated that police are actively on the ground. We take this opportunity to extend deepest sympathy to his employees and family, our thoughts and prayers are with them.”

Police are actively investigating and are appealing to the general public to contact the Bimini police at telephone numbers 242-347-3144, the Central Detective Unit at telephone number 242-350-3107 through 12, 911/919 or the nearest police station.

And So It Begins

One thing I notice is that this gentleman had decided to make his home and investment in the Bahamas. He was committed, and has routes here, yet sadly he can only be described as a "resident". Why don't we allow people who come here and invest and commit to our country to have a path to citizenship? These are the types of people we need and want, almost all other countries have a path to citizenship.

And they wonder why the US Government warns it's citizens about visiting the Bahamas.

No story is ever reported correctly when it comes to crime in Bimini ......... HMMMMM

Before all you super righteous geniuses condemn the Bahamas and Bahamians, let's allow the police investigation to determine a motive. This man being a white Floridian investor doesn't mean he was not entangled in drug, arms and human smuggling!

The notion that someone shot this guy multiple times for no reason simply does not pass the smell test. He did something that pissed off the wrong person.

We will know the full story soon enough!

doesnt really matter who did it and why, murder is illegal, even if the victim is a drug dealer, car thief, or member of the catholic church and abusing little boys. What does matter, is that it's getting more and more dangerous in our little islands. And the murder of an american, even a bad american, will not help our tourism sector.
Without American tourists, we all will starve.

Tourism is already suffering from the crime levels. In the hotels it’s a common topic.

At least we don't go around shooting Jews and other minorities in churches, dancehalls, schools, and malls like in the USA ............ SMT.

White extremist Americans are far worst a threat to their country than the typical criminal in Nassau.

Doesn't excuse Bahamian crime, but Americans should be the last to point fingers at us when it comes to national fear of crime.

Your right the crime here is horrible. People are crazy anymore and have no respect for human life. None the less families don’t vacation in high crime places. Even on the cruise ships a lot of people don’t exit the ship. Saying that, the crime on cruise ships are kept quiet. There not safe either. We live in a different world today.

Mexico is not a popular tourist location anymore.

Parker the truth is all murders are tragic. As the FNM Government mostly doc and no Games say. There is no fear of Crime.

The USA Embassy have all the Rights to issue an advisory on crime in the Bahamas, Crime is not FNM. PLP or DNA. it is a Bahamian problem.

It is to bad that No Games does not understand this and put a stop to thumping his chest when crime is down. The same goes for the PLP, Crime should not be a political foot ball.