Insight: Outside The Circle But Still With Lessons To Impart 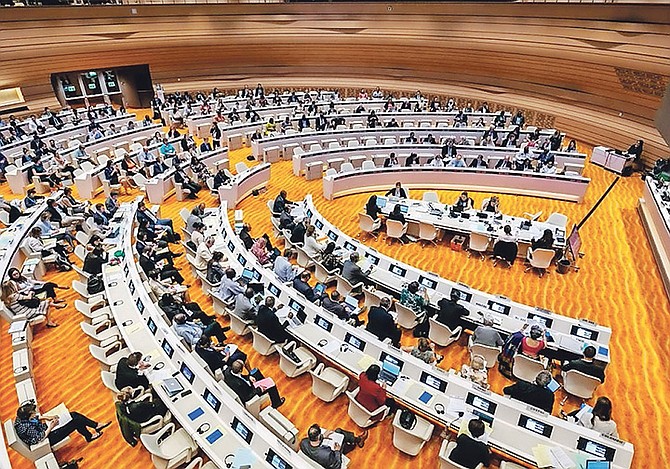 THE 71st World Health Assembly held in Geneva last May.

IN less than a month, countries around the world will convene for the 72nd World Health Assembly to implement its 2030 Agenda for Sustainable Development. Delegates will also hold critical talks on a variety of issues including public health emergency preparedness, universal health coverage, climate change and disease control.

As The Bahamas takes its seat with other WHO member states, it would do well to check in with a former friend: Taiwan.

Without formal recognition - its observer status was yanked two years ago - the tiny tech giant remains locked out of critical health information networks, research and resources.

But that hasn’t stopped the country from improving its nationwide disease prevention capacity in line with the International Health Regulations (IHR). It is also the eighth nation to have undergone a Joint External Evaluation (JEE), a WHA-initiative to improve the global infectious disease prevention network.

“The ascendancy of political considerations over professional ones has resulted in Taiwan’s absence from the international disease prevention and health security protection network,” according to Taiwan’s health ministry.

“When SARS struck in 2003, many of our people were needlessly sacrificed as Taiwan had to press ahead combating the disease without WHO’s timely assistance. The international community should not permit such a travesty to occur again. It should understand that Taiwan’s people share with the rest of the world the same right to participate, on an equal basis, in the global disease prevention system.”

The Health ministry’s statement continued: “Taiwan has transformed itself from a recipient of foreign aid to a provider of international humanitarian assistance. It has actively helped many nations in need. Taiwan’s experience can serve as reference to many other nations. Bringing Taiwan into the international disease prevention system will benefit many nations, and help WHO be more effective in its disease prevention efforts.”

Taiwan launched its National Health Insurance (NHI) scheme in 1995, and its primary health care network boasts screening times of less than one hour at major hospitals.

And while their system, and roll out, could provide some inspiration for local efforts, perhaps the most striking policy is the government’s rigorous commitment to meeting the UN’s Sustainable Development Goals (SDGs).

The SDGs represent an urgent call for global partnership to end poverty and other deprivations by utilising strategies that improve health and education, reduce inequality, spur economic growth – all while tackling climate change through preservation and conservation.

Taiwan’s strategy is the phased transition to a “circular economy”, an economic system that divests economic growth from resource consumption.

This system is being used in Tainan City by the state-owned Taiwan Sugar Corporation, which expects to open its first residential village run solely from the byproducts of agricultural production with zero waste.

TSC is the largest land owner in Taiwan and it has taken the view that its five percent share is public property that will only be leased for usage, not sale, so as not to deprive future generations of its use.

The company was among the top five sugar exporters in the world during the early 20th century, now it provides agricultural support with multi-level public private partnerships with local farmers.

“Our civilisation since the industrial revolution has defined growth in GDP terms, and that in itself we believe is the flawed definition of civilization growth,” TSC chairman Charles Huang said.

“The linear economy is by design flawed because the profit and the benefits are privatized and the costs and risks are socialized, and circular economy is the solution.

“Human beings since industrial revolution, we were taught to define happiness as owning things. We need to own things, the ownership question is also by design a flawed characteristic of linear economy because it encourages the supplier to make products very abundantly. And then most companies, not all but most, design for obsolescence because that’s the only way they can increase their revenue and profit.

Mr Huang said: “We need to move away from design for obsolescence, to a product service concept. The consumer only wants to use the product, they don’t need to own it.”

Mr Huang pointed to the UN’s Millennium Development Goals as an indicator there was a need to create markers for growth that were more representative of a country’s true progress.

“GDP doesn’t measure everything... if the marriage is very happy, if the kids are healthy.

The pilot circular village is still being fine tuned with officials wrestling with how rent will be calculated, and leasing conditions. It also remains to be seen how TSC will tackle its ambitious goal of leasing building materials to be reused. But these are the forward-thinking strategies that can lead to global breakthroughs, and it’s also why collaboration and resource-sharing are so important.

Mr Huang said: “When we talk about the transition to circular economy, we are not talking about the end result itself but I think we are focusing on the process by which we persevere. I think that’s the critical part, making sure we have the momentum to continue promoting the concept of a transition from this flawed economic model to a new one, and to persuade people to embrace a different set of growth definition.”

It is unlikely Taiwan will find a seat at the table in Geneva when the global forum begins on May 20. But perhaps sovereign states, like The Bahamas and other former allies of Taiwan in the Caribbean, will take the time to examine Taiwan’s lessons to see what they can learn.

Anyone know about the 70th Congress which would have had goals for 2010 and how much / if any of those goals were reached? Or is this just a ten year get-together hang out and talk bull party?