Face To Face: A Sheltered Island Girl Who Sat At The Head Of The Nation 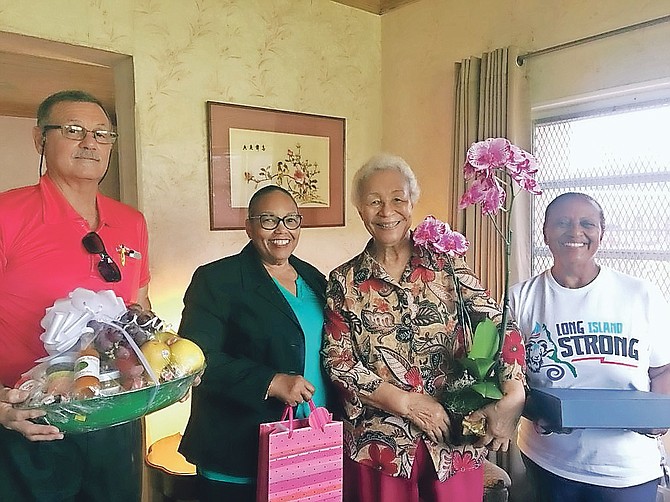 From Rose’s to Mount Fitzwilliam is one of the best books I have ever read. After completing the nearly 400 pages of rich history and personal reflection, I closed it with the same feeling I had when I arrived at the end of Sir Clifford Darling’s A Bahamian Life Story… a greater sense of responsibility, love of country and impetus to do and be my best.

Dame Dr Ivy L Dumont fascinates me with her ability to recall so much of her life in such vivid detail. I felt like I could see the scenes of the quaint settlements of Rose’s and then Deadman’s Cay, Long Island, where she was born and bred. I understood her struggle to adjust when it came time for schooling in New Providence. I related to her commitment to succeed even in the midst of dire circumstances. I was impressed by her ability to continue to pursue and achieve higher education while maintaining her roles as wife and mother. Most of all, I understand why she feels nothing but the grace of God could have laid out her path from a sheltered island girl to the highest seat of government in the Commonwealth of The Bahamas, making history as this country’s first-ever female Governor General.

I did not get an opportunity to sit face to face with Dame Ivy to prepare this week’s column. I wrote this while awaiting the imminent birth of my daughter. However, I met Dame Ivy on several occasions during my years of active reporting while she served as Governor General. She was a warm, gracious host and exhibits a sense of calm with a smile which reflects that no matter how high she may climb, she remains rooted in her Long Island upbringing. I did, however, have the opportunity to appreciate her life through her book, published by Guanima Press in 2009. My mother and members of the Long Islander’s Association visited her at her home yesterday in commemoration of Long Island Week, which culminates with the Long Islanders’ Association annual fair and raffle on Saturday, May 4 beginning at 12 noon. I encourage each of them, and in fact every Bahamian, to read Dame Ivy’s book. Each school should include her story - and others written by great Bahamians - in their social studies curriculum. This would enrich the students’ lives and give them a greater sense of identity and national responsibility, while instilling pride in their country.

I felt connected to Dame Ivy as she shared her Long Island heritage, particularly, her mother’s lineage. Her mother’s parents hailed from south end, just like my mother and her parents. Her mother’s father was Walter Darville, a farmer and catechist of the Anglican church. His wife, Anna Maria, was a Watson before she married him. I am married to a Darville whose grandfather, Virginius Darville, also grew up in Rose’s. And although my last name was Ingraham before marriage, my birth certificate indicates Watson-Ingraham, as my mother’s family is from Gordon’s, Long Island. So, another Watson and Darville has tied the knot in this time. Anna Maria’s brother, William Wallace Winder Watson, is my great grandfather. I learned more about my own lineage through Dame Ivy’s account and for that, I am truly grateful.

Dame Ivy is the daughter of Alphonso Tennyson and Cecilia Elizabeth (Liz) Turnquest and is the first of their 14 children. When she was eight years old, the Turnquests left Rose’s to take a 50-mile drive by truck to Deadman’s Cay. Her father was a schoolteacher in Rose’s, but his first assignment as a head teacher sent him to Deadman’s Cay, which is half-way between the northern and southern tips of Long Island. His children, therefore, also transferred from Rose’s Grant-in-Aid School, where he served for nine years, to Buckley’s All Age School, located in the most developed settlement on the island. There, Alphonso and Liz made their home on the Turnquest estate, meaning the young Ivy and her siblings got to know her father’s family a lot better. The Turnquests, originally Tornqvist, came to The Bahamas from Sweden in the late 1700s. Today, it is one of the well known names coming out of Long Island.

Long Islanders, from the time of Ivy’s growing up in the 1930s and 40s up until the present day, are known for their resilience and self sustenance. Their ability to survive and stick together through the most arduous of times is something often commended. We saw those qualities on full display during the passage of Hurricane Joaquin in 2015, which ripped through the southern Bahamas, leaving damage that islanders are still recovering from.

In Ivy’s day, her parents had a pressure cooker that allowed them to preserve their farm’s goods, including pigeon peas, carrots, okra and other goods. They also shared the cooker with their neighbours so that others could benefit from having a variety of things to eat when the harvest was small. Neighbours would share their portions of meat and seafood and this way, they helped each other to survive.

The women were industrious and made baskets, bags, hats and other items out of silver top palm from nearby ponds. To this day, Long Island is known for having some of the most intricate patterns in the straw craft industry. Women also knew how to sew for their families and others, and a sewing machine was a prized possession. The young Ivy made herself familiar with her mother’s machine at a very early age and thus, a life-long talent was born – one that ended up becoming a main source of sustenance through her adult years.

Being the eldest, Ivy was always a responsible child. In no time, her talents and leadership responsibility were noticed by her school’s principal, Nelson Glanville McFarlane Major who made her a monitor, which is like a teacher’s assistant, at the age of 12. He was a strict disciplinarian with a keen ability of getting the best out of his students, and many Long Islanders successfully passed the examination to attend The Government High School in New Providence upon completion of schooling in Long Island. These students fared well and over the years, Long Island has produced many teachers of a high caliber. Today, the island’s NGM Major High School, named in his honour, continues to produce excellent students who score so well in national examinations that they are nationally recognised.

Ivy travelled by sailboat to the capital, where she lived with her grandmother Ida and her aunt in order to attend The Government High. Before her final year, she caught typhoid fever. After a period of hospitalisation, Ivy was sent back to her parents to be cared for. The illness had taken the lives of some young people at the time, while others had suffered mental or physical impairment. Ivy was fortunate to make a full recovery and continue schooling, although she finished a year later than expected.

School has always been important to Dame Ivy. She became a school teacher and offered much to the education system, pioneering some of the processes and procedures that seem commonplace today. While pouring into the lives of Bahamian children, she never lost sight of the importance of educating herself. She obtained her Bachelor’s, Master’s and PhD degrees through sheer determination, coupled with a most supportive husband, Mr Reginald Dumont, former police officer with Guyanese roots, who supported her will for advancement in life. With his support and that of family and close friends, her beloved children, Cheddi and Edda were well taken cared-of during her nights of study or need for travel.

This support expanded when Dame Ivy’s career led into politics, which was one which she did not set out or aspire for. She witnessed the period in history when The Bahamas became an independent nation, and when women were given the right to vote. She has interacted with most if not all of the nation builders of her time. Her ability to remain focused on matters of national importance and stay oblivious to petty party politics made her well respected by persons from any side of the political divide. Her quiet, calm spirit has worked in her favour throughout her life.

Dame Ivy first became the Secretary General of the Free National Movement. When party leader Hubert Ingraham led them to victory in 1992, she was called to serve in his Cabinet as Minister of Health and Environment and leader of Government business in the Senate. She also had an opportunity to serve as Minister of Education, bringing her full circle in her field.

Whereas some with political aspirations dream of achieving such posts, Dame Ivy was somewhat reluctant, always wanting to spend more time with family. She attempted to retire to do just that; therefore, she ended up having five retirements in her lifetime. However, she gave in to the calling on her life to give more and do more for her country. She would never imagine that the day would come that Mr Ingraham would ask her to take up the highest seat of government and make Bahamian history as the first female Governor General.

During her four-year tenure in Government House, Dame Ivy set these objectives:

“*To maintain my relationships with students and youth groups;

*To emphasise the importance of family; and

*To restore, renovate, rehabilitate and redecorate the physical plant with particular reference to public areas of the Residence (Government House)”.

She did so with class and grace and on November 30, 2005 at the age of 75, she finally retired with a quiver full of accomplishments and a professional and personal life well-lived. With her dear husband Reginald and beloved son Cheddi now deceased, Dame Ivy remains supported by the love of her daughter, Edda Dumont Adolph, four grandchildren and four great-grandchildren. This column could only barely scrape the surface of the life of such a phenomenal woman, one who has inspired me to keep a journal as she did, and to achieve more for myself and country.