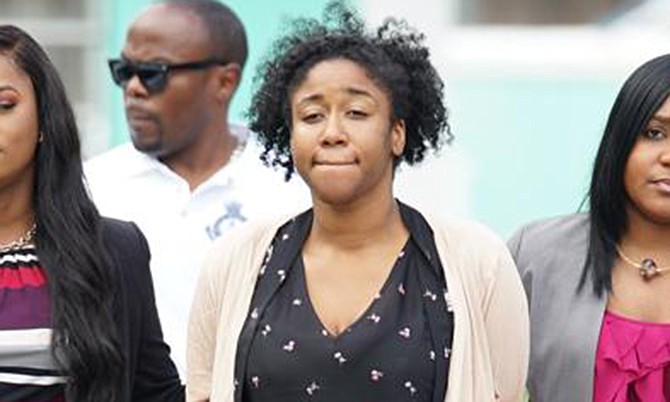 DE’EDRA Gibson, the woman previously accused of abducting four young boys between the ages three and eight, has had her charges upgraded to child stealing.

The 29-year-old hair stylist received her four voluntary bills of indictment (VBI) yesterday, which said the Crown is pursuing the weightier charge against her.

Gibson is now expected to be formally arraigned before Justice Bernard Turner on August 16. She remains on $20,000 bail until that time.

In April, Gibson was charged before Magistrate Samuel McKinney with abducting three eight-year-old boys and a three-year-old between February 16 and March 29.

During her initial arraignment, her attorney Howard Thompson Jr told Magistrate McKinney that his client has a history of mental health issues. In fact, he said just last October, Gibson spent some time in the psychiatric ward of the Brookdale University Hospital in New York.

As a result, Magistrate McKinney remanded the woman to the Sandilands Rehabilitation Centre (SRC) and adjourned the matter to have a psychiatric report on her mental fitness to plea presented to the court.

That psychiatric report revealed she is in fact fit to plea to the charges. She subsequently elected to be tried in the Supreme Court.

At the time however, Gibson appeared initially not to want her matter to be tried in the Supreme Court, and at the very least, seemed to be opposed to her family having a part in the decision making, as she could be overheard telling her attorney that “they don’t have no say”.

Nonetheless, after she told the magistrate of her selection, and he remanded her to the BDCS to await service of a VBI, she said in a disgusted voice: “I hope they happy.”

As part of her bail conditions, Gibson must have regular check-ups at the SRC every two months, follow her treatment plan and provide proof of compliance to the court.